October 25, 2011
Institute for the Physics and Mathematics of the Universe (IPMU)

Kashiwa, Japan — Most galaxies have supermassive black holes at their centers, as heavy as millions or even billions times that of our Sun.  But how they grew to this tremendous weight is still a mystery.  Dr. John Silverman (IPMU) and the international COSMOS team have demonstrated, using the Chandra X-ray observatory and the European Southern Observatory’s Very Large Telescope, that interactions between galaxies are effective at triggering the growth of such supermassive black holes.

The paper has been accepted for publication in The Astrophysical Journal.

Supermassive black holes (SMBH) sit at the center of most galaxies that we observe today. How did they grow to millions or billion times the mass of our Sun? Answers to this question have been elusive for some time although important clues have been uncovered. For instance, SMBHs prefer to reside in the most massive galaxies and the mass of a SMBH is directly related to the mass of stars present in the central region (i.e., bulge) of its host galaxy. It is now thought that such massive galaxies grew in part by mergers and interactions between less massive galaxies. Such violent episodes in the evolution of galaxies have also been invoked to explain how matter is driven to their center that can then grow a SMBH.

A simple test is to determine whether SMBHs are found in greater numbers in galaxies undergoing a merger compared to those in isolation. While this sounds easy enough, astronomers have struggled to effectively carry out this test for some time. This is because the glaring light of an actively growing SMBH, seen observationally as either an active galactic nucleus (AGN) or the more luminous quasar, can outshine their entire host galaxy making it difficult to determine whether they reside in a galaxy undergoing an interaction with another fainter galaxy. Such interactions should distort the shape of the galaxy.

The COSMOS team has carried out an alternative test that doesn’t require any knowledge of whether there are signs of distortions in optical images. Rather, galaxies are assumed to be in the process of interacting if they have a close neighbor. This requires accurate distance measurements of about 20,000 galaxies in the COSMOS field as provided by the zCOSMOS redshift survey with the European Southern Observatory’s Very Large Telescope. Isolated galaxies provide the comparison sample to establish whether AGNs are more common in galaxies experiencing close encounters. X-ray observations with NASA’s Chandra Observatory cleanly identify those galaxies that harbor an AGN since X-ray emission is a common property of growing SMBHs. Further, X-rays can penetrate obscuring material, such as star-forming regions, usually present in gas-rich galaxy mergers thus providing a broad census of AGN activity.

It is reported in The Astrophysical Journal that galaxies in close pairs are twice as likely to harbor AGNs as compared to galaxies in isolation. This result indicates that mergers, in an early stage, do lead to enhanced black hole growth. Given the moderate frequency of such interactions within the overall galaxy population, these events contribute about 20% to the overall mass buildup of the black hole population. Therefore, additional physical mechanisms are responsible for growing the majority of SMBHs. It is also likely that galaxies undergoing a final coalescence in a merger may play a role. These findings provide further evidence that galaxies and their SMBHs grow together over substantial periods of time. 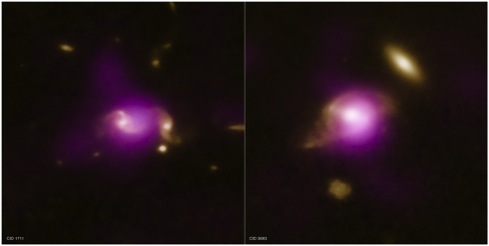 Two examples of galaxy pairs in the COSMOS survey (courtesy of the Chandra X-ray Center). The Hubble Space Telescope images show galaxies undergoing a close encounter (shown in gold). X-rays, as detected by Chandra, indicate which of the two galaxies hosts an AGN. In addition, diffuse X-ray emission from hot gas is present thus highlighting that such galaxy associations tend to reside in galaxy groups, an environment of rapid galaxy and black hole growth.