Revealing Dark Energy's Hold on the Universe ~round table discussion~

Revealing Dark Energy's Hold on the Universe ~round table discussion~

A new collaboration aims to learn how dark energy is driving
the accelerated expansion of the universe.

ONE OF THE MOST AMBITIOUS COLLABORATIONS in cosmology is about to get underway. 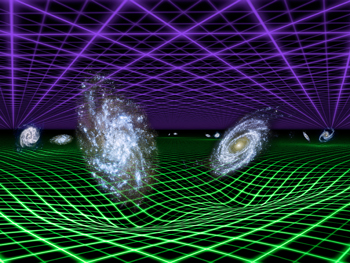 In this artist's conception, dark energy is represented by the purple grid above, and gravity by the green grid below. (Credit: NASA/JPL-Caltech)
In early 2014, a project called SuMIRe, or Subaru Measurement of Images and Redshifts, will begin a five-year survey photographing a few billion galaxies and measuring the distances for a few million of them. Meanwhile, another project called ACTPol will use the Cosmic Microwave Background – the afterglow radiation of the Big Bang and the oldest light in the universe – to also detect galaxies and galaxy clusters deep in space and far back in time.

Together, data from both projects are expected to help reveal how dark energy has caused the universe to expand over cosmic time.

Three members of the collaboration spoke recently with The Kavli Foundation in a roundtable discussion about the ACTPol/SuMIRe partnership, dark energy and their future research plans.

CLICK HERE to read the roundtable discussion in The Kavli Foundation's web page.