Using NASA's Spitzer Space Telescope, astronomers including Wiphu Rujopakarn of the Kavli IPMU have spotted an eruption of dust around a young star, possibly the result of a smashup between large asteroids. This type of collision can eventually lead to the formation of planets. The results of this study are published in the journal Science. 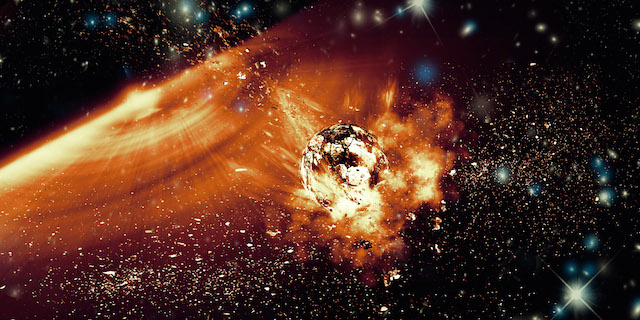 
Scientists had been regularly tracking the star, called NGC 2547-ID8, when it surged with a huge amount of fresh dust between August 2012 and January 2013.

"We think two big asteroids crashed into each other, creating a huge cloud of grains the size of very fine sand, which are now smashing themselves into smithereens and slowly leaking away from the star," said lead author and graduate student Huan Meng of the University of Arizona, Tucson.

While dusty aftermaths of suspected asteroid collisions have been observed by Spitzer before, this is the first time scientists have collected data before and after a planetary system smashup. The viewing offers a glimpse into the violent process of making rocky planets like ours.

Rocky planets begin life as dusty material circling around young stars. The material clumps together to form asteroids that ram into each other. Although the asteroids often are destroyed, some grow over time and transform into proto-planets. After about 100 million years, the objects mature into full-grown, terrestrial planets. Our moon is thought to have formed from a giant impact between proto-Earth and a Mars-size object.

In the new study, Spitzer set its heat-seeking infrared eyes on the dusty star NGC 2547-ID8, which is about 35 million years old and lies in the Vela constellation. Previous observations had already recorded variations in the amount of dust around the star, hinting at possible ongoing asteroid collisions. In hope of witnessing an even larger impact, which is a key step in the birth of a terrestrial planet, the astronomers turned to Spitzer to observe the star regularly. Beginning in May 2012, the telescope began watching the star, sometimes daily.

A dramatic change in the star came during a time when Spitzer had to point away from NGC 2547-ID8 because our sun was in the way. When Spitzer started observing the star again five months later, the team was shocked by the data they received.

"We not only witnessed what appears to be the wreckage of a huge smashup, but have been able to track how it is changing -- the signal is fading as the cloud destroys itself by grinding its grains down so they escape from the star," said Kate Su of the University of Arizona and co-author on the study. "Spitzer is the best telescope for monitoring stars regularly and precisely for small changes in infrared light over months and even years."

A very thick cloud of dusty debris now orbits the star in the zone where rocky planets form. As the scientists observe the star system, the infrared signal from this cloud varies based on what is visible from Earth. For example, when the elongated cloud is facing us, more of its surface area is exposed and the signal is greater. When the head or the tail of the cloud is in view, less infrared light is observed. By studying the infrared oscillations, the team is gathering first-of-its-kind data on the detailed process and outcome of collisions that create rocky planets like Earth.

"This is what we have been teaching our schoolchildren about how planets like our Earth was formed. To witness it in our lifetime in a truly extraordinary opportunity" said Wiphu Rujopakarn of the Kavli IPMU and co-author on the study.

The team is continuing to keep an eye on the star with Spitzer. They will see how long the elevated dust levels persist, which will help them calculate how often such events happen around this and other stars, and they might see another smashup while Spitzer looks on.

The results of this study are published in the journal Science. 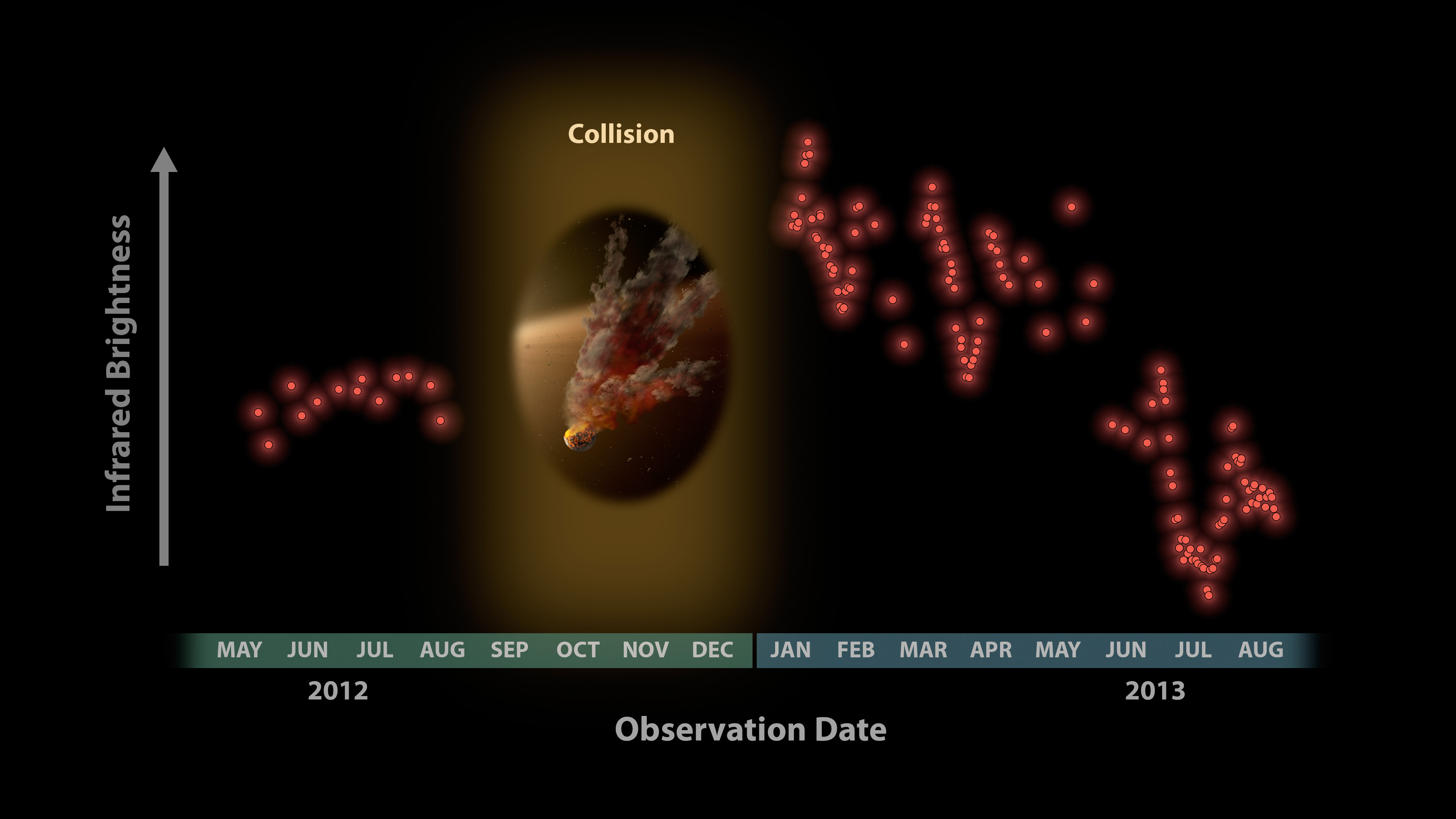 Figure 4:Witnessing a Planetary Wreckage: Astronomers were surprised to see these data from NASA's Spitzer Space Telescope in January 2013, showing a huge eruption of dust around a star called NGC 2547-ID8. In this plot, infrared brightness is represented on the vertical axis, and time on the horizontal axis. The data at left show infrared light from the dust around the star back in 2012. Between 2012 and 2013, Spitzer had to stop observing the star because it was located behind the sun, as seen from Spitzer's Earth-trailing orbit.
When Spitzer began watching the star again in January 2013, the astronomers noticed a huge jump in the data. Why the dramatic change? The team says that dust in the star system surged intensely, likely after two large asteroids collided, kicking up fresh dust.
The periodic variability of the signal is caused by the remaining dust cloud in orbit around the star. This dust cloud is elongated, so the amount of infrared signal it produces changes as it circles the star from our point of view. The infrared signal is decreasing over time as dust from the collision is ground down to finer sizes and blown of the system.
Image credit: NASA/JPL-Caltech/University of Arizona

Wiphu Rujopakarn
Kavli Institute for the Physics and Mathematics of the Universe, The University of Tokyo

Yoshihisa Obayashi
Kavli Institute for the Physics and Mathematics of the Universe, The University of Tokyo
press_at_ipmu.jp
+81-4-7136-5974