A team led by Gastón Folatelli at the Kavli IPMU, the University of Tokyo, has found evidence of a hot binary companion star to a yellow supergiant star, which had become a bright supernova. The existence of the companion star had been predicted by the same team on the basis of numerical calculations. This finding provides the last link in a chain of observations that have so far supported the team's theoretical picture for this supernova. The results are published in The Astrophysical Journal Letters and have wide implications for our knowledge of binary systems and supernova mechanisms.

"One of the most exciting moments in my career as an astronomer was when I displayed the newly arrived HST images and saw the object right there, where we had anticipated it to be all along" said Gastón Folatelli , who led the efforts to obtain the new Hubble Space Telescope (HST) observations.

The question of how massive stars spend their short lives until they become supernovae is of great interest for astrophysicists. According to the standard theory, which is only applicable to isolated stars, only cool and extended (red supergiants) or hot and blue (Wolf-Rayet stars) are able to become supernovae. However, growing evidence suggests that most massive stars are not lonely singles but they belong to close binary systems with profuse interactions. Episodes of mass transfer between the members of binary star systems affect the way the stars evolve, meaning that there are a great many more potential scenarios for the final stages of supernova progenitors.

The nearby supernova SN 2011dh, which occurred in 2011 in the well-known whirlpool galaxy M51, which is about 24 million light-years away from the earth, presented an excellent example that could not be explained by the standard theory. What appeared to be a yellow supergiant star was detected at the location of the supernova in images obtained before the explosion, but yellow supergiant stars in isolation were not thought capable of becoming supernovae. Controversy arose in the astronomy community with several experts proposing that the actual progenitor must have been an unseen bright blue object, such as a Wolf Rayet star. However, the team led by Melina C. Bersten at Kavli IPMU and Omar Benvenuto at the University of La Plata, Argentina, showed that the exploding star must have been extended, like a yellow supergiant, and that it must have belonged to a binary system (see web release on September 28 2012: http://www.ipmu.jp/node/1404). "We produced detailed models that self-consistently explained every property of SN 2011dh through the explosion of a yellow supergiant star in a binary system," remarked Melina C. Bersten.

In March 2013, the proposal of Benvenuto, Bersten and collaborators was given substantial support when the disappearance of the yellow supergiant was observed, indicating that it and not a bright blue star was the exploding object (see web release on Apr. 5 2013: http://www.ipmu.jp/node/1537). "At that time there was just one piece of the puzzle missing to confirm our model: we had to find the companion star that, according to our calculations, was a hot, compact object," said Omar Benvenuto.

With that goal, the group set out to obtain HST observing time, which was granted in 2013 and recently executed on August 7, 2014. Images were obtained in the ultraviolet regime, where the companion star was expected to be most clearly visible. A point source was clearly detected in the new images at the exact location of the supernova (see announcement in http://www.astronomerstelegram.org/?read=6375). "To our excitement, the object had the properties predicted by the models," explained Schuyler Van Dyk, of Caltech, who was in charge of the image analysis. Folatelli and collaborators judged it unlikely that the detection was due to some other contaminating source.

Further HST observations were recently obtained in the optical range by another European team. "When available, such data will not only serve to definitely validate the existence of the companion star, but also they will provide critical information to refine the binary model originally proposed by our team", said Ken'ichi Nomoto from Kavli IPMU. This is a unique opportunity to make such a detailed study of the progenitor of a supernova. The results will have important implications for our knowledge of stellar evolution and its connection with supernova properties.

The case of SN 2011dh beautifully illustrates the advantages of an active feedback between theory and observation. "As a scientist, for me it is like a dream come true to make a prediction and have it confirmed step by step as the supernova evolves and facts are revealed. It is a rare case for astronomy, where

events usually take much longer to develop. We are very happy with how the story of SN 2011dh proceeded," concluded Melina C. Bersten. 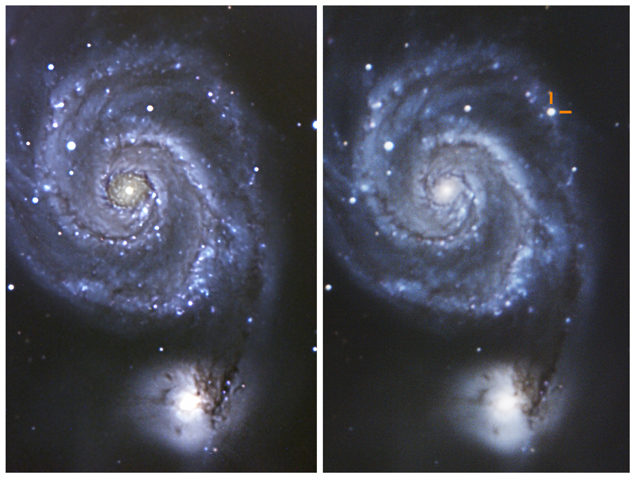 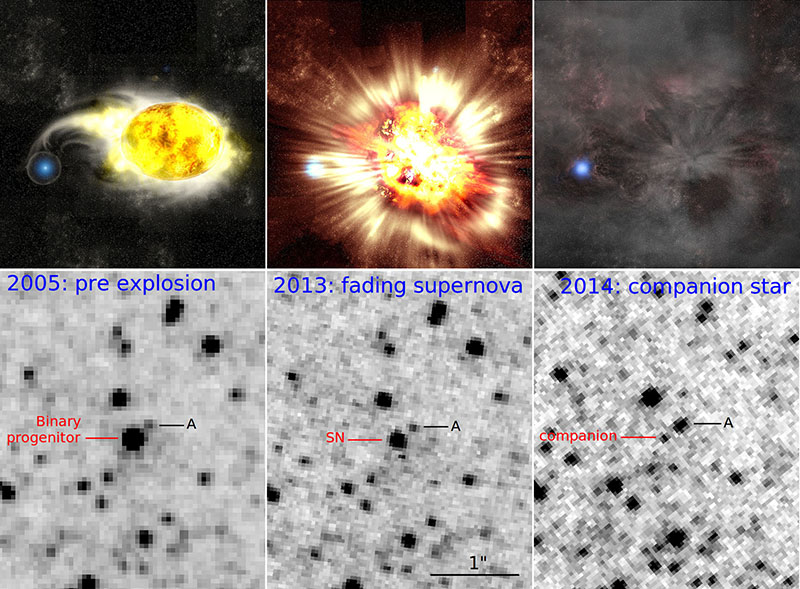 All figures are found at http://web.ipmu.jp/press/2011dh/

The record of press conference at September 11 is available https://www.youtube.com/watch?v=kZe9MIMtT5g.