XMASS collaboration, led by Yoichiro Suzuki at the Kavli IPMU, has reported latest results on warm dark matter search. Their results rule out the possibility that super-weakly interacting massive bosonic particles (Bosonic super-WIMPs) constitute all dark matter in the universe. This result was published in September 19th issue of the Physical Review Letters as an Editors’ Suggestion. 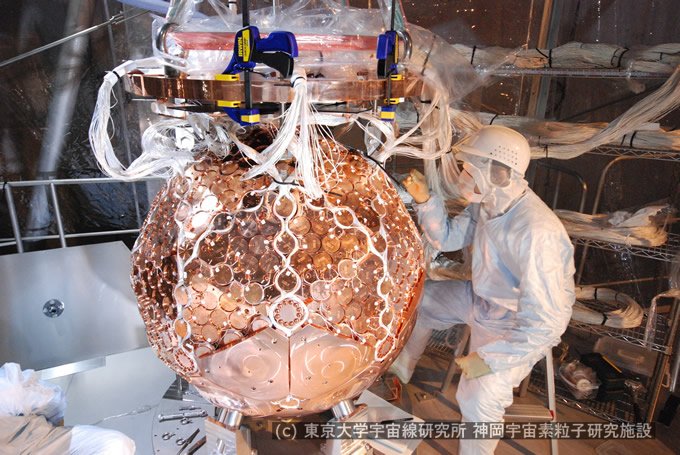 The universe is considered to be filled with dark matter, which cannot be observed by ordinary light. Although much evidence supports the existence of dark matter, it has yet to be directly detected and its nature is not understood.

Various theoretical models have been proposed to explain the nature of dark matter. Some models extend the standard model of particle physics, such as super-symmetry, and suggest that weakly interacting massive particles (WIMPs) are dark matter candidates. These models have motivated most research on experimental dark matter. In discussions on the large-scale structure formation of the universe, these WIMPs fit the cold dark matter (CDM) paradigm.

On the other hand, some simulations based on the CDM scenario predict a much richer structure of the universe on galactic scales than those observed. Furthermore, high-energy collider experiments have yet to provide evidence of super-symmetric particles. These facts have increased the interest in lighter and further weakly interacting particles such as bosonic super-WIMPs as dark matter. Super-WIMPs with masses greater than a twentieth of an electron (more than 3 keV) do not conflict with the structure formation of the universe.

“Bosonic super-WIMPs are experimentally attractive since if they are absorbed in a ordinary material, they would deposit energy essentially equivalent to the super-WIMP’s rest mass,” Suzuki says. “And only ultra-low background detectors like XMASS can detect the signal.”

The XMASS experiment was conducted to directly search for such bosonic super-WIMPS, especially in the mass range between a tenth and a third that of an electron (between 40 and 120 keV). XMASS is a cryogenic detector using about 1 ton of liquid xenon as the target material. Using 165.9 days of data, a significant excess above the background is not observed in the fiducial mass of 41 kg. The absence of such a signal excludes the possibility that bosonic super-WIMPs constitute all dark matter in the universe.

“Light super-WIMPs are a good candidate of dark matter on galactic scales,” Professor Naoki Yoshida, a cosmologist at the School of Science, the University of Tokyo and a Project Professor at the Kavli IPMU says. “The XMASS team derived an important constraint on the possibility of such light dark models for a broad range of particle masses.”

Yoichiro Suzuki
Kavli Institute for the Physics and Mathematics of the Universe, The University of Tokyo
E-mail: yoichiro.suzuki_at_ipmu.jp