A new project proposed by the IPMU Director Hitoshi Murayama was approved by the Council for Science and Technology Policy, Japan (http://www8.cao.go.jp/cstp/sentan/index.html). Dark matter and dark energy, approximately occupying 23% and 73% of the universe respectively and not visible to us, remain as total mysteries. Recent studies, however, show that they play key roles in the universe: the dark matter for the origins of the universe, galaxies and stars, and the dark energy for their future whereabouts.

Brief Description of the Project

“Everything is made of atoms” has been the main driving force responsible for an impressive progress over the past two centuries to understand of the nature around us. But this approach that dominated the way we see the universe went through a revolutionary change over the past ten years.

Whole thing started with a 1998 discovery that the speed of expansion of the universe is accelerating. The expansion itself was predicted by Einstein’s theory of general relativity. Being a part of gravity phenomena, however, the expansion must behave like the motion of a ball thrown upwards, namely the gravitational pull should slow down the expansion. Instead, the speed of expansion which appeared to have been slowing down shifted toward an accelerated increase since about 7 billion years ago. Equivalently, the energy in the space is increasing. This is called dark energy, the energy which pops out of the universe as it expands. If true, this mysterious dark energy occupies approximately 73% of the universe. The discovery has been so shocking that some even conjectured that the Einstein’s theory may be wrong. It has been a fascinating mystery among scientists worldwide, and fierce competition to settle the issue has been taking place in Europe and US, in particular. 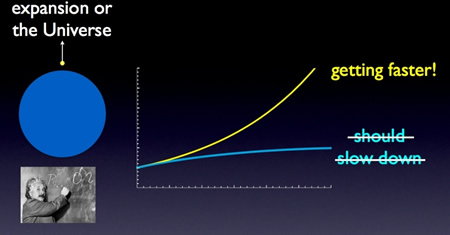 Meanwhile, Japanese experiments Super-Kamiokande in the same year and KamLand in 2002 revealed that neutrinos carry tiny but finite mass. Furthermore, it was established by 2003 that more than 80% of matter in the universe is made of something completely different from ordinary atoms. It is called dark matter. It does not emit light, and therefore invisible to us, so that the existence was established only by observing its gravitational pull with nearby objects. We now know that the universe is made of 4.4% ordinary atoms and 23% dark matter, of which neutrinos take up somewhere above 0.1% but less than 1%. In total, more than 95% of the universe is dominated by unknown object, altering our view of the origin of the universe and its future. 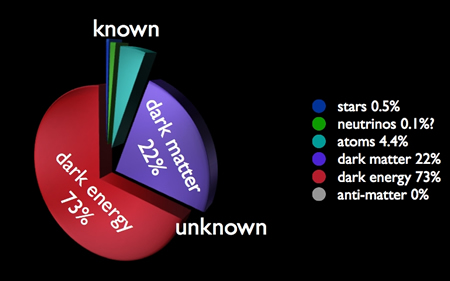 A generally accepted scenario for the origin of the universe is that it started as a hot fire-ball from the Big-Bang 13.7billion years ago, flat and structure-less at the beginning . But soon the dark matter began to cluster by the gravitational pull, and eventually pulling ordinary matter. They then evolved together into stars and galaxies. The new project aims to “see” evolving processes of the universe since its beginning by mapping out three-dimensional distribution of the dark matter. They use “Gravitational Lens Effect” where light is bent by the gravitational pull of the dark matter. It also tries to determine the fraction of neutrinos in the dark matter with an accuracy of 0.1%. 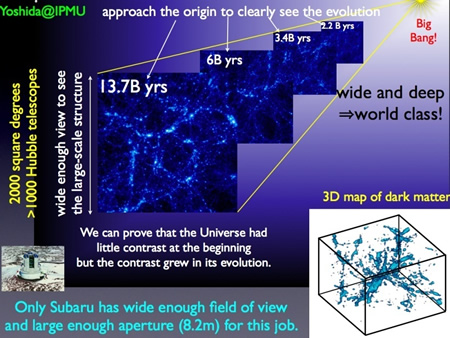 Since it takes billions of years for the light of distant galaxies to reach us, seeing distant sky is equivalent to see their past. Using this principle, the new project explores history of the expanding universe by observing distribution and spectra of more than 30 million distant galaxies. The study may reveal the true nature of dark energy. It may even point out any mistake in Einstein’s theory. It may predict future whereabouts of the universe as a result of extrapolation from the past history. If the accelerated expansion continues, the universe eventually will end up in Big-Rip, in which the expansion speed reaches infinite and the stars and galaxies, and eventually all atoms, get ripped apart.

The Subaru Telescope, built by National Astronomical Observatory of Japan at the summit of Mauna-Kea in Hawaii Island, is best suited to this project. Its large 8.2m lens is necessary for collecting faint light of distant galaxies . At the same time, for the study of the universe, we must see patterns and tendencies of the universe as a whole rather than observing the property of individual galaxies, somewhat similar situation to a need of census for the study of a nation. Observation of a large number of galaxies must be carried out within a few year’s time scale. For this reason, we add improvements to Subaru that extend the solid angle coverage 1,000 times of the famous Hubble telescope, therefore making the required “census” possible. A whole system must make maximum use of these new improvements. IPMU is working together with NAOJ to build a next generation camera, Hyper Suprime-Cam, weighing 3 ton and having 900 million pixels. The team will also build a spectrometer to analyze the light from the galaxies. The new spectrometer bundles 3,000 optical fibers and is capable of continuous measurements of different directions with a micron-level accuracy.

The project name SuMIRe stands for “Subaru Measurement of Image and Redshifts”. It observes images of redshifts of the galaxies using Subaru Telescope. The project is one of 30 that were approved by the government.