Kashiwa, Japan -- An international team has uncovered the shape of core-collapse supernovae. They used the Subaru Telescope to discover that supernovae are not round but rather pencil-like. The result sheds light on actively debated unsolved topics in astrophysics: the explosion mechanisms of supernovae and gamma-ray bursts. The result was published on Science Online.

Massive stars (more than 10 times the Sun) end their lives with a bang. The massive stars' death is triggered by the gravitational collapse of the inner core. The central region becomes superdense by this collapse, leaving a neutron star or even a black hole. Aneutron staris a compact star as massive as the Sun within about 10 km of radius, and a blackhole has such a strong gravitational pull that even light cannot escape. As an outcome of the collapse, the energy of the falling matter is somehowtransferred to the outer part of the star leadinga supernova explosion. However, there has been a big problem in this theory:astrophysicists have not been successful in understanding the detailed mechanismthat turns the collapse into an explosion as we can see in telescopes. In recent years, interesting theories have been proposed to understand the explosion mechanism.The key is to make the collapse not round and the explosion pencil-like like two cannons placed back to back.

Materials thrown out by the explosion actually keep expanding even years later. If one can see the shape of the expanding materials, it will tell astrophysicists details about the original explosion. However, a supernova explosion gives out such a dense gas that it has been impossible to see what is going on at its core. In addition, most supernovae take place in other galaxies, namely about a few hundred million light years away, and it is impossible to see the image of their shape directly. It has been a great challenge to astrophysicists to observe the shape of very core of a supernova explosion.

Keiichi Maeda of IPMU and his colleagues had predicted theoretically that a line profile of light emitted by oxygen could tell them the shape of expanding materials. Most importantly, they realized that it is possible to judge whether a supernova is round by studying the color(spectrum) of a supernova at late-times, namely 200 days after the explosion (Figs. 1, 2). Then the outer part of the exploded star becomes thin enough so that we can see directly into the expanding core. The light emitted from the expanding oxygen atoms becomes slightly bluer or redder by Doppler effects depending on if the gas is moving towards or away from us. Studying the small change in color of the light, they proposed to determine the shape of the expanding core.

If the explosion is more or less round, the oxygen-rich core of a supernova progenitor star is thrown out as a shell, resulting in a "single-peaked" oxygen emission line when intensity of light isshown as a function of its color. On the other hand, if the explosion is pencil-like (or, canon balls), the oxygen-rich materials are ejected mostly along the equatorial direction as a "doughnut"(Fig. 1). The oxygen emission line profile is then predicted to be "single-peaked" for an on-axis observer (Fig. 2, upper), but"double-peaked" for an observer looking at the supernova sideways (Fig. 2, lower). This stems from different Doppler shift - longer/shorter wavelength detected for materials moving away from/toward the observer.

The research team proceeded, and has finally collected late-time spectra of 15 supernovae using the 8.2 m Subaru telescope (operated by National Astronomical Observatory of Japan, Fig. 3). They also used in part the Very Large Telescope (European Southern Observatory). Even with these largest telescopes, the observation was challenging, because a supernova is extremely faint at such a late phase after 200 days since the explosion. Indeed, such observations had been available only for a few supernovae before the present work and it was not possible to tell if they were special in some way or of garden-variety types. 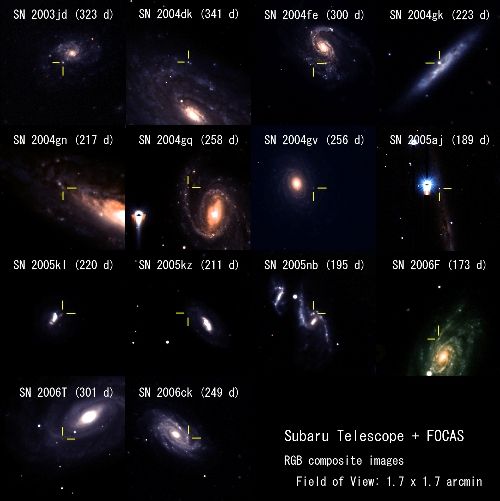 Fig. 3 : Supernova Samples
Images of supernovae at the late-phase observed by the Subaru telescope. A few supernovae were also observed with the Very Large Telescope. Spectroscopy was performed for these objects plus SN 2002ap (for which we did not perform imaging observations).

Their result supports recent theoretical scenarios of pencil-like supernova explosion, namely by hydrodynamic instability (i.e., the vibration of the shock waves), or rotation plus a magnetic field. "Also important is", says Maeda, the first author of the paper, "the finding that the deviation from spherical symmetry looks smaller in usual supernovae than in extreme ones associated with gamma-ray bursts." This conclusion is also reported in the same paper. He adds, "And it strongly indicates that the explosion mechanisms of the supernovae linked to gamma-ray bursts and other usual supernovae are intrinsically different." According to him, the team plans to look into more details of individual theoretical scenarios and compare those with the observations. "This is even more challenging than the present study, both in theory and observation. But we believe this is within the reach", says Maeda.

Keiichi Maeda was born in 1976. He received Ph. D degree from School of Science, University of Tokyo, in 2004. He then worked at graduate school of Arts and Science, University of Tokyo, as a JSPS (Japanese Society of Promotion of Science) postdoctoral researcher. He moved to the Max-Planck-Institute for Astrophysics (Garching; Germany) on April, 2004 as a JSPS postdoctoral fellow for Research Abroad. He then moved back to University of Tokyo as an assistant professor to join in the new institute, the Institute for the Physics and Mathematics of the Universe (IPMU). "This work," mentions Keiichi Maeda about the study reported here, "represents one of the main goals we have been trying to achieve, during the long period in which I have been at Tokyo, Garching, and then Kashiwa. Without discussion with many researchers in these institutes, not only coauthors, we would not have made it this far.We have just started thinking about applications of the result of this study in a context of the cosmological study. There are several interesting possibilities. They are not easy, I'm afraid, but not impossible", mentions Maeda.

IPMU has been founded on 1 October, 2007, to solve manymysteriesof the Universe, such as what the mysterious Dark Energy is, as one of the WPI initiative centers by Ministry of Education, Culture, Sports, Science and Technology. "Acrucial concept behind this new institute is", says the director, Hitoshi Murayama, "that we respect and support initiatives by young researchers. This study is a very nice example, and proves that our concept of the institute bears fruit."