December 13, 2021
Kavli Institute for the Physics and Mathematics of the Universe (Kavli IPMU) 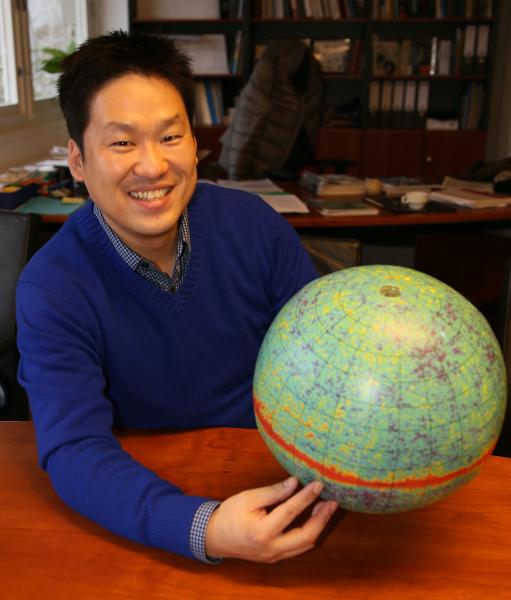 Max Planck Institute for Astrophysics Director and Kavli Institute for the Physics and Mathematics of the Universe Principal Investigator Eiichiro Komatsu has been selected as one of the recipients of this year's Inoue Prize for Science.

The Inoue Prize for Science was established in 1984 by the Inoue Foundation for Science, and presents researchers with a gold medal and some research funding assistance. The foundation recognizes researchers under 50 who have made remarkable achievements in natural and fundamental sciences. A prize giving ceremony will be held on February 4, 2022 for this year's recipients.

Komatsu has made many contributions to his research of the beginning, present, and future of the Universe, by combining astronomical data with the laws of physics. This time, he has been recognized for his work on “Critical tests of theories of the early universe using the cosmic microwave background”.

Inflation is a period of extremely rapid expansion of space that theorists say should have occurred just after the beginning of our Universe. Komatsu has been working as a member of NASA's Wilkinson Microwave Anisotropy Probe (WMAP) team since 2001, using the cosmic microwave background (CMB) observational data to find evidence of inflation theory.

Komatsu said he was grateful to the Inoue Foundation for Science for this recognition of his work and the prize.

“I feel honored and humbled to be recognized among the recipients of this prize. I am grateful to those who nominated me for the prize, the selection committee for their recognition of our work, and everyone who mentored me. We are close to figuring out whether the period of cosmic inflation actually occurred in the early Universe. Theory of inflation was proposed 40 years ago, and one of the proposers, Prof. Katsuhiko Sato, received the 5th Inoue Prize for Science in 1988. Prof. Jun’ichi Yokoyama, who studied the novel aspects of inflation that were not known when theory was proposed originally, received the 29th prize in 2012. Our research follows the path paved by them. This prize encourages us to take the next step towards finding definitive evidence for inflation," he said.