An international team of researchers led by Masamune Oguri at Kavli IPMU and Naohisa Inada at Nara National College of Technology conduced an unprecedented survey of gravitationally lensed quasars, and used it to measure the expansion history of the universe. The result provides strong evidence that the expansion of the universe is accelerating. There were several observations that suggested the accelerated cosmic expansion, including distant supernovae for which the 2011 Nobel Prize in Physics was awarded. The team's result confirms the accelerated cosmic expansion using a completely different approach, which strengthens the case for dark energy. This result will be published in The Astronomical Journal.

Masamune OGURI
Kavli Institute for the Physics and Mathematics of the Universe,
Todai Institutes for Advanced Study(TODIAS), The University of Tokyo

Quasars are very luminous objects powered by accretion of gas into supermassive black holes at the centers of distant galaxies. A quasar is typically located far away. "Gravitational lensing, a phenomenon that a distant object is split into two or more images due to the gravity of a massive foreground object." Toshifumi Futamase, Professor at Tohoku University says, "Prof. Oguri is a leading young researcher in the research field of gravitational lensing. He leads the test of the presence of dark energy using gravitational lensing. The great advantage of this research is much higher statistical significance, which is made possible by a large sample of quasars in the SDSS." The phenomenon of gravitational lensing, often called as "Cosmic Mirage", was first discovered in 1979, and since then more than 100 gravitationally lensed quasars have been reported.

An international team of researchers led by Masamune Oguri, Assistant Professor at the Kavli Institute for the Physics and Mathematics of the Universe (Kavli IPMU), and Naohisa Inada, Lecturer at Nara National College of Technology, conducted a large survey to search for gravitationally lensed quasars in the massive data sets of the Sloan Digital Sky Survey (SDSS). Over almost 10 years of careful examinations of 100,000 quasars, the team successfully discovered nearly 50 new gravitationally lensed quasars in total, significantly increased a sample of cosmic mirages (Figure 1).

The team measured the probability of gravitational lensing among distant quasars to be about 0.05 percent, which was then compared with detailed theoretical calculations to extract information on the expansion hisotry. The result indicates that the expansion of the universe is indeed accelerating, which suggests that the universe must be filled with mysterious energy component called dark energy.

"The accelerated cosmic expansion is one of the central problems in modern cosmology", Oguri says, "In 2011, the Nobel Prize in Physics was awarded to the discovery of the accelerated expansion of the universe using observations of distant supernovae. A caution is that this method using supernovae is built on several assumptions, and therefore independent checks of the result are important in order to draw any robust conclusion. Our new result using gravitational lensing not only provides additional strong evidence for the accelerated cosmic expansion, but also is useful for accurate measurements of the expansion speed, which is essential for investigating the nature of dark energy."

Careful comparisons with other cosmological observation led to the conclusion that dark energy behaves almost like Einstein's cosmological constant. "Statistical method on gravitationally lensed quasars have been known to be sensitive to the expansion history of the universe,"  Masashi Chiba, Professor at Tohoku University, says,"therefore actively studied by Japanese researchers in the 1990s. Observations of gravitational lensing at that time already hinted the presence of dark energy, but both due to the small sample size and large uncertainty in the theoretical modeling of lensing rates the result was not widely accepted. This research conducted a enormous survey of gravitationally lensed quasars and adopted much more sophisticated theoretical calculations to build a very convincing case for the accelerated cosmic expansion."

"Studies of dark energy (cosmological constant) were popular in Japan already in the early 1990s, largely because of pioneering work by Prof. Fukugita, Principal Investigator at Kavli IPMU and a co-author of this paper.", says Yasushi Suto, Professor at University of Tokyo, "This survey of gravitationally lensed quasars was initiated and organized by Profs. Oguri and Inada, who were graduate students when the survey started, within the large international SDSS collaboration, and they led the team to success. This result is important in that it confirms the presence of dark energy independently from the observation of supernovae." 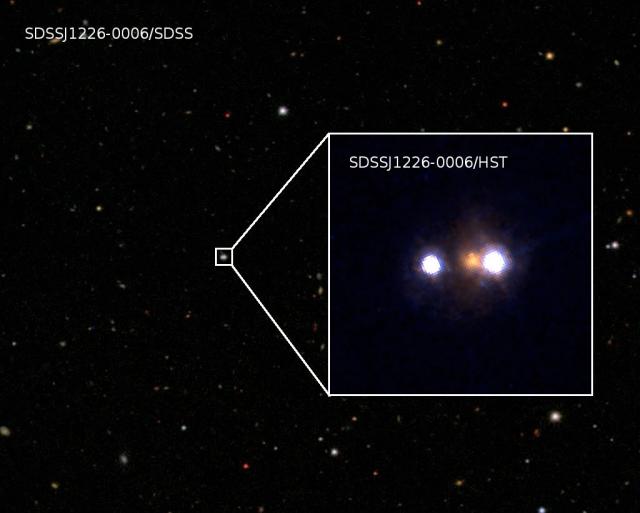 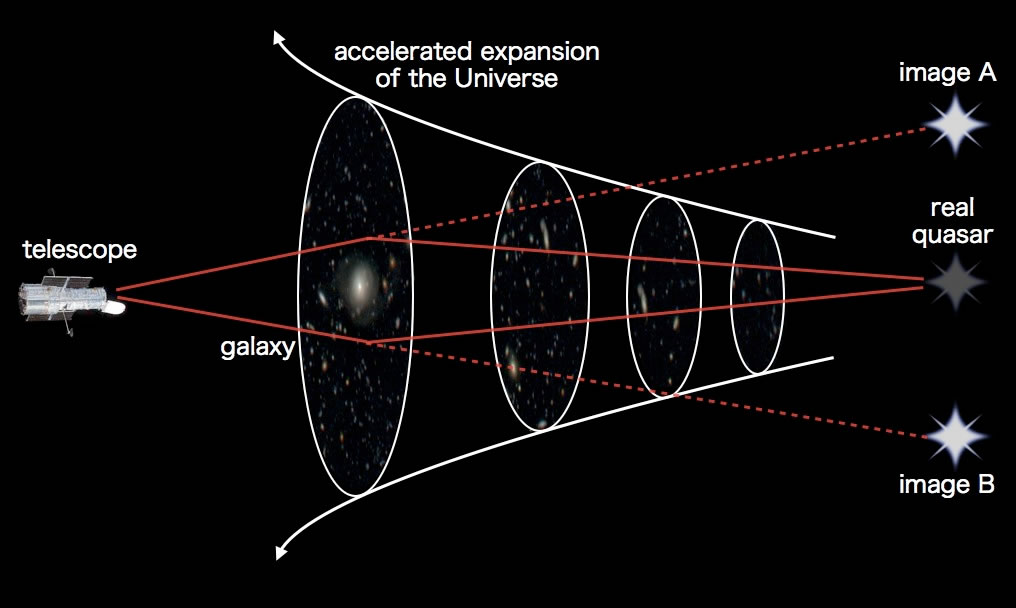