August 28, 2012
Kavli Institute for the Physics and Mathematics of the Universe (Kavli IPMU）

In the August 24 issue of the journal Science, astronomers, including Robert Quimby (postdoc at Kavli IPMU), show for the first time that at least some thermonuclear (Type Ia) supernovae come from recurrent novae. The results of the study, a product of the Palomar Transient Factory (PTF), are surprising because previous examples of Type Ia supernovae have lacked signs of the red-giant companion star needed to fuel recurrent novae outbursts.

The authors conclude that there are multiple ways to make a Type Ia supernova -- a finding that could have implications for understanding the differences seen in these "standard candles," that were used to reveal the presence of dark energy.

Quimby said that such discoveries from PTF are important because, "Type Ia supernova have been used as tools to study our universe for decades, but it is only now that we are beginning to truly understand how these explosions come to be."

The study was led by Ben Dilday, a postdoctoral researcher in physics at UC Santa Barbara and at Las Cumbres Observatory Global Telescope Network (LCOGT).

The PTF team takes digital pictures of the same patches of sky over and over with a 1.2-m telescope in southern California and uses computers to search for small changes. On January 16, the search detected a new object shining near a faint galaxy where no such object had been seen before. The source was named PTF 11kx and the PTF team performed spectroscopy a few nights later to determine what kind of object this was, what it was made of, and how far away it is.

The spectra showed the broad features characteristic of a young Type Ia supernova, but with a twist: there were unusually strong, narrow absorption features. The team formed an early hypothesis that there was relatively slow moving gas in the vicinity of the explosion was blocking light at certain wavelengths corresponding to specific ions in a hot gas. If this gas was close enough to the explosion site, the fast moving supernova ejecta would eventually crash into it.

The PTF team diligently captured spectra on multiple nights, recording the spectra as this drama unfolded. After about a month of study, the narrow absorption lines changed to emission lines, indicating that the gas was in fact close to the explosion site and the supernova ejecta had plowed into it. But there was another set of absorption features at even slower velocities that did not go away. This indicates that there was likely more gas near the explosion site but at larger distances.

So what caused these multiple shells of gas around the explosion site? Dilday's team found that if the progenitor was a recurrent nova, this would uniquely explain the observations. In a recurrent nova, gas is transferred from a companion star, such as a red giant star, onto a white dwarf, which is the remaining core of a dead star that has blown away its outer layers. This builds up a layer of fuel on the surface of the stellar ember, and periodically it ignites causing a relatively bright outburst called a nova. Both the white dwarf and its companion survive these eruptions, and the cycle repeats. If more mass is accreted onto the white dwarf than is thrown off in the eruption, the white dwarf gains mass. But there is only so much mass that can be added to a white dwarf before it becomes unstable and explodes for good as a supernova.

With such a progenitor system, the multiple shells of slow moving gas around the explosion site are naturally expected: they are material cast off from the prior novae eruptions. As the nova shells expand, they run into a wind blown off by the companion star, and this slows the shells down. This explains why the outer shell is moving slower than the inner shell--it has had more time to sweep up the wind and slow down.

PTF has observed a thousand Type Ia supernova, but no others are quite like PTF 11kx. Previous studies have reported evidence for Type Ia supernovae interacting with circumstellar material, but these could not be clearly connected to recurrent novae and their origin remains a matter of debate.

Last year PTF detected a Type Ia supernova, SN 2011fe, in a galaxy close enough that the companion star in a recurrent nova system could have been detected in Hubble Space Telescope images obtained prior to the explosion. However, no such object is seen. There have also been recent studies of supernova remnants that find no such companion stars left near the explosion site even though such stars would easily survive. The implication is that some Type Ia supernovae do not have bright companion stars at the time they explode, while others, like PTF 11kx, do.

Ken Nomoto (Kavli IPMU) made the following comment on this paper: "This is a great discovery which provides the first observational evidence that a certain binary system consisting of a white dwarf and a red giant companion can produce a Type Ia supernova after many prior recurrent nova explosions.  Such an evolutionary route has been theoretically predicted by a group of I. Hachisu (U. Tokyo), M. Kato (Keio U.), and K. Nomoto (Kavli IPMU).  This group also provides a theoretical model that explains why signs of the companion have not been seen in other Type Ia supernovae or their remnants (September 1, 2012, issue of Astrophysical Journal Letter). These variations of the progenitor binary system must be carefully examined if Type Ia supernovae are to be used for the precise cosmological measurements needed to explore the nature of Dark Energy.  Further observations of Type Ia supernovae to discover more and more signatures of the companion stars are necessary and PTF will play a critically important role." 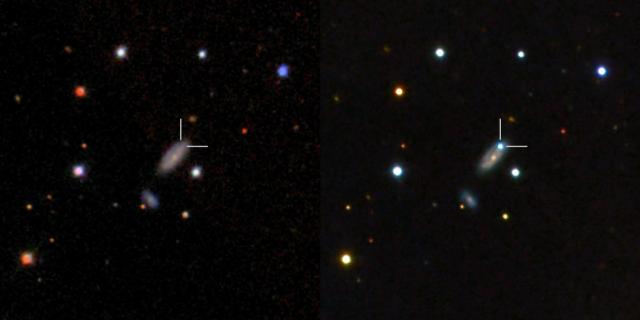 Left: Host galaxy of PTF11kx before the supernova exploded as seen from the Sloan Digital Sky Survey. Right: the blue dot is the supernova near peak brightness as seen with LCOGT’s Faulkes Telescope North. The supernova is 600 million lightyears away in the constellation Lynx. Credit: B.J. Fulton, LCOGT 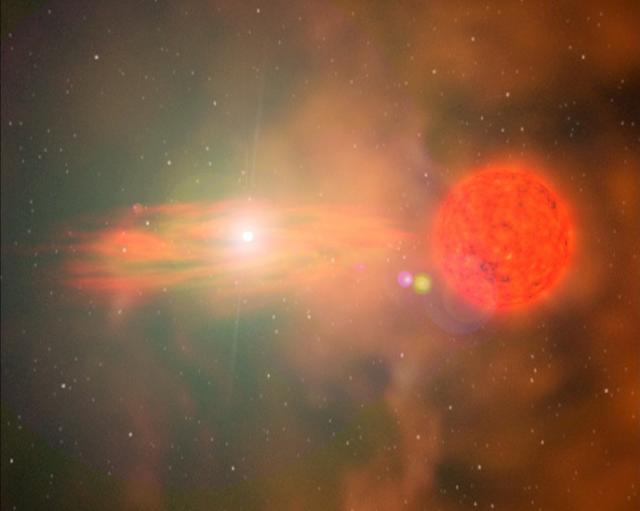 Artist's conception of a binary star system that produces recurrent novae, and ultimately, the supernova PTF 11kx. A red giant star (foreground) loses some of its outer layers though a stellar wind, and some of it forms a disk around a companion white dwarf star. This material falls onto the white dwarf, causing it to experience periodic nova eruptions every few decades. When the mass builds up to the near the ultimate limit a white dwarf star can take, it explodes as a Type Ia supernova, destroying the white dwarf.
Credit: Romano Corradi and the Instituto de Astrofísica de Canarias

Robert Quinby
Kavli Institute for the Physics and Mathematics of the Universe,
Todai Institutes for Advanced Study(TODIAS), The University of Tokyo