April 23, 2013
Kavli Institute for the Physics and Mathematics of the Universe (Kavli IPMU)

Kashiwa Japan - A team of researchers at the Kavli IPMU led by Robert Quimby has identified what may prove to be the first ever Type Ia supernova (SNIa) magnified by a strong gravitational lens. In this work, the ‘standard candle’ property of Type Ia supernovae is used to directly measure the magnification due to gravitational lensing. This provides the first glimpse of the science that will soon come out of dark matter and dark energy studies derived from deep, wide-field imaging surveys.

Figure 1: Schematic illustration of the magnification of PS1-10afx. A massive object between us and the supernova bends light rays much as a glass lens can focus light. As more light rays are directed toward the observer than would be without the lens, the supernova appears magnified. (Credit: Kavli IPMU)

The supernova, named PS1-10afx, was discovered by the Panoramic Survey Telescope & Rapid Response System 1 (Pan-STARRS1). PS1-10afx exploded over 9 billion years ago, which places it far further than typical Pan-STARRS1 discoveries. Based on this distance and its relatively bright appearance, the Pan-STARRS1 team concluded that PS1-10afx was intrinsically very luminous. The inferred luminosity, about 100 billion times greater than our Sun, is comparable to members of a new, rare variety of superluminous supernovae (SLSNe), but that is where the similarities end.

SLSNe typically have blue colors, and their brightness changes relatively slowly with time. PS1-10afx on the other hand was rather red even after correcting for its redshift, and its brightness changed as fast as normal supernovae. There is no known physical model that can explain how a supernova could simultaneously be so luminous, so red, and so fast.

Soon after the findings were announced, Robert Quimby, a postdoctoral researcher at Kavli IPMU, independently analyzed the data. Quimby is an expert in SLSNe and has played a key role in their discovery. He quickly confirmed part, but not all of the conclusions. PS1-10afx was indeed rather distinct from all known SLSNe, but the data struck Quimby as oddly familiar. He compared the features seen in the spectra of PS1-10afx to known supernova, and, surprisingly, found an excellent match. The spectra of PS1-10afx are almost identical to normal SNIa.

SNIa have a very useful property that has enabled cosmologists to chart the expansion of our Universe over the last several billion years: SNIa have strikingly similar peak luminosities that can be rendered even more standard by correcting for how quickly they brighten and fade (their "light curves"). This property allows astronomers to use SNIa as standard candles to measure distances, as was key to the discovery of the accelerating expansion of the Universe (2011 Nobel Prize in Physics).

To understand this mysterious discovery, Quimby tapped into cosmologists and mathematicians at Kavli IPMU, including Marcus Werner who specializes in mathematical theory of gravitational lensing, and found an explanation: the anomalously high brightness could indicate that PS1-10afx was gravitationally lensed by an object between us and the supernova. While light travels through space in “straight” lines, massive objects warp space and thus cause rays of light to “bend” around them. Thus if there is a sufficiently massive object aligned between us and PS1-10afx, light rays that would have gone off to other parts of the cosmos will be focused on us, making PS1-10afx appear brighter (see Figure 1). This does not change the colors or spectra of the lensed object, nor does it change how fast the supernova evolves. The supernova simply appears brighter than it would otherwise, just as was observed for PS1-10afx. In this case, the lensing object may be detectable even after the supernova has faded away; future observations may thus provide final confirmation of this scenario.

The Kavli IPMU team’s identification of the first strongly lensed SNIa is unprecedented but not entirely unexpected. Masamune Oguri, one of the co-authors on Quimby’s team, led a paper a few years ago predicting that Pan-STARRS1 was capable of discovering strongly lensed SNIa. He has also shown that such objects may be exploited to place precise constraints on the cosmology of the Universe. Now that Quimby’s team has shown how to identify them, next generation surveys with the Hyper Suprime-Cam on Subaru Telescope and the planned LSST can be tuned to discover even more strongly lensed SNIa. These discoveries can be used to study the nature of dark matter, test theories of gravity, and help reveal what our universe is made of. 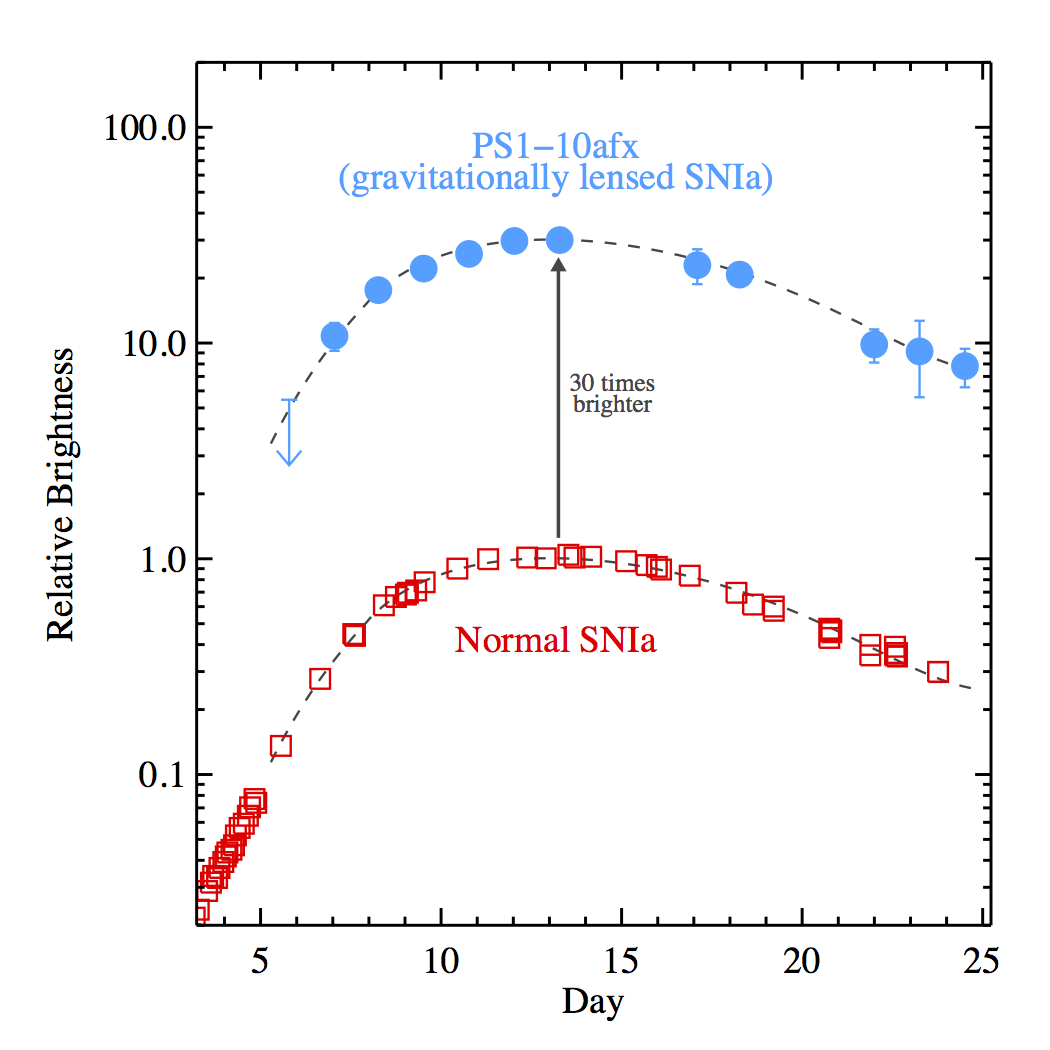 Figure 2: The light curve of PS1-10afx compared to a normal SNIa. The blue dots show the observations of PS1-10afx through a red (i-band) filter, which corresponds to ultra-violet (UV) light in the rest frame of the supernova. The red squares show UV observations of the nearby SNIa, 2011fe compressed slightly along the time axis to match the width of PS1-10afx in its rest frame. The dashed lines show a fit to the SN 2011fe data and this same curve shifted by a constant factor of 30. The good agreement with the PS1-10afx data shows that PS1-10afx has the lightcurve shape of a normal SNIa, but it is 30 times brighter than expected. 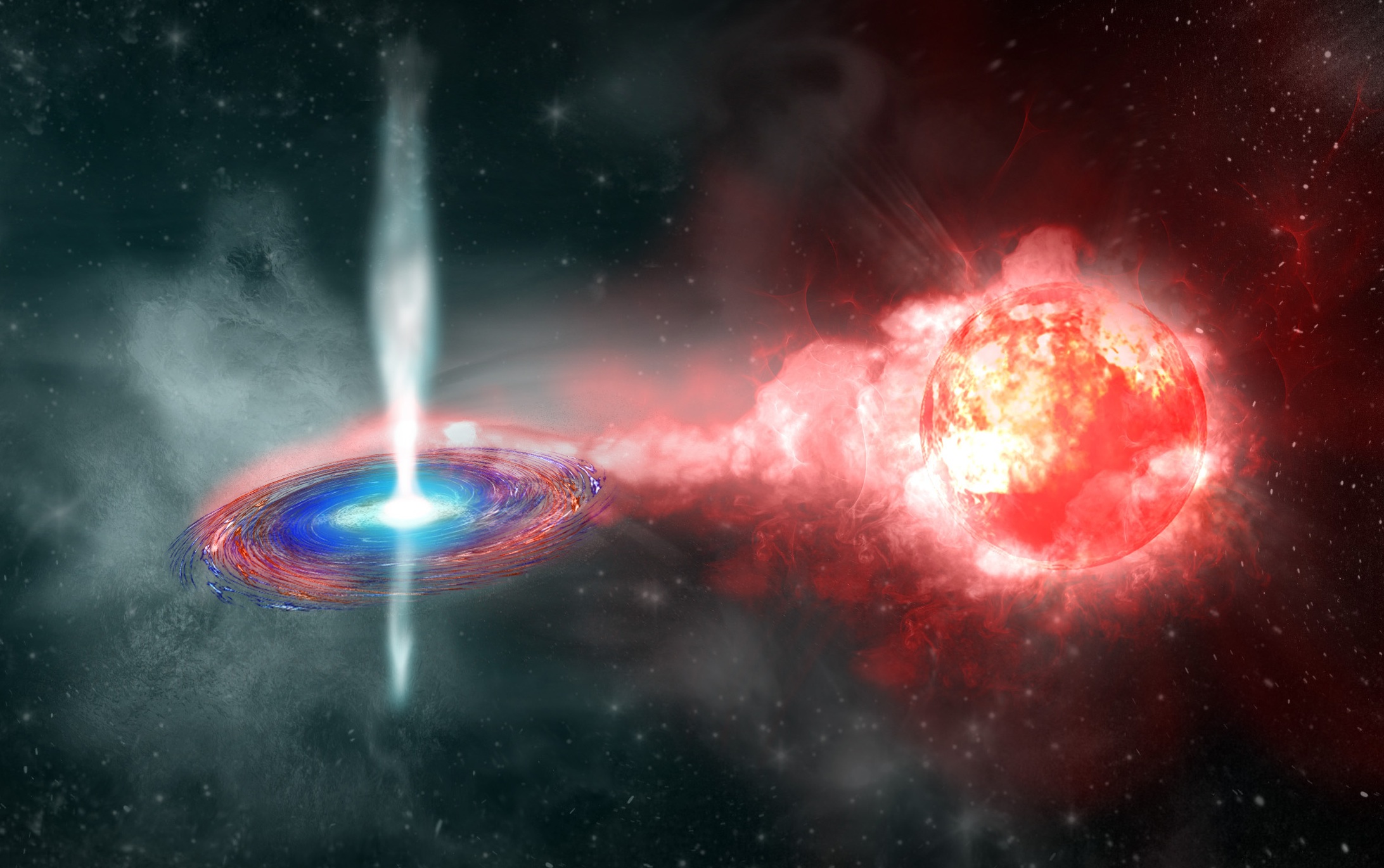