June 13, 2013
Kavli Institute for the Physics and Mathematics of the Universe (Kavli IPMU)

An international team of astronomers (Note) from Taiwan, England, and Japan has used the Subaru Telescope to measure the distribution of dark matter in fifty galaxy clusters and found that its density gradually decreases from the center of these cosmic giants to their diffuse outskirts. This new evidence about the mysterious dark matter that pervades our Universe conforms to the predictions of cold dark matter theory, known as "CDM".

The current team, led by Dr. Nobuhiro Okabe (Academia Sinica, Taiwan) and Dr. Graham Smith (University of Birmingham, England), used the Subaru Prime Focus Camera (Suprime-Cam) to investigate the nature of dark matter by measuring its density in fifty galaxy clusters, the most massive objects in the Universe. "A galaxy cluster is like a huge city viewed from above during the night", said Smith. "Each bright city light is a galaxy, and the dark areas between the lights that appear to be empty during the night are actually full of dark matter. You can think of the dark matter in a galaxy cluster as being the infrastructure within which the galaxies live," he explained. The team wanted to use a large sample of galaxy clusters to find out how the density of dark matter changes from the center of a typical galaxy cluster to its outskirts.

The density of dark matter depends on the properties of the individual dark matter particles, just like the density of everyday materials depends on their components. CDM, the leading theory about dark matter to date, describes that dark matter particles only interact with each other and with other matter via the force of gravity; they do not emit or absorb electromagnetic radiation and are difficult if not impossible to see. Therefore, the team chose to observe dark matter by using gravitational lensing, which detects its presence through its gravitational interactions with ordinary matter and radiation. According to Einstein's theory of relativity, light from a very distant bright source bends around a massive object, e.g., a cluster of galaxies, between the source object and the observer. It follows from this principle that the dark matter in cosmic giants like galaxy clusters alters the apparent shape and position of distant galaxies. Lead author Okabe enthused, "The Subaru Telescope is a fantastic instrument for gravitational lensing measurements. It allows us to measure very precisely how the dark matter in galaxy clusters distorts light from distant galaxies and gauge tiny changes in the appearance of a huge number of faint galaxies." (Figure 1)

Figure 1: An outline of how the dark matter distribution (right) was reconstrcted from optical images (left) taken by the Subaru Telescope. A precise measurement of the shapes of background galaxies in observed images enabled the team to investigate the distortion pattern (center) and then reconstruct the distribution of dark matter in the galaxy clusters. (Credit: NAOJ/ASIAA/School of Physics and Astronomy, University of Birmingham/Kavli IPMU/Astronomical Institute, Tohoku University) 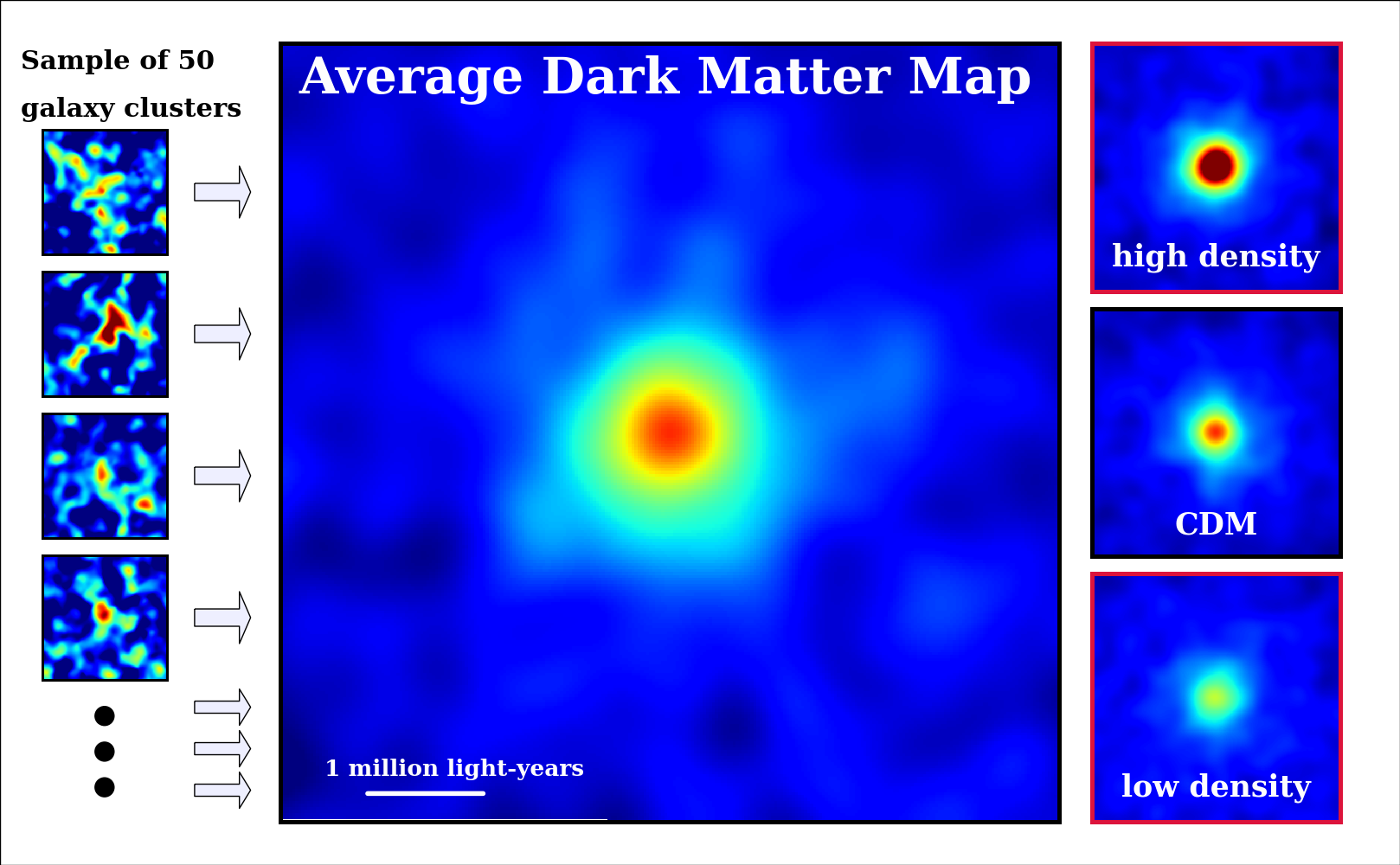 Figure 2: Dark matter maps for a sample of fifty individual galaxy clusters (left), an average galaxy cluster (center), and those based on dark matter theory (right). The density of dark matter increases in the order of blue, green, yellow, and red colors. The white horizontal line represents a scale of one million light-years. The map based on predictions from CDM theory (right, middle) is a close match to the average galaxy cluster observed with the Subaru Telescope. (Credit: NAOJ/ASIAA/School of Physics and Astronomy, University of Birmingham/Kavli IPMU/Astronomical Institute, Tohoku University)

What does the future hold for the team's continued research on dark matter? Smith noted, "We don't stop here. For example, we can improve our work by measuring dark matter density on even smaller scales, right in the center of these galaxy clusters. Additional measurements on smaller scales will help us to learn more about dark matter in the future."

Team member Professor Masahiro Takada (Kavli Institute for the Physics and Mathematics of the Universe, The University of Tokyo, Japan) is also excited about the future: "Combining lensing observations of many galaxy clusters into a single measurement like this is a very powerful technique. Japanese astronomers are preparing to use Subaru Telescope's new Hyper Suprime-Cam (HSC) to conduct one of the biggest surveys of galaxies in human history. Our new results are a beautiful confirmation of our plan to use HSC for gravitational lensing studies."

The members of this research team are also team members of the "Local Cluster Substructure Survey (LoCuSS)", an international consortium of astronomers studying galaxy clusters, as part of the global research effort to answer big, open questions about the cosmos, including the nature of dark matter. More information about the LoCuSS consortium is available from Dr. Graham Smith, and at http://www.sr.bham.ac.uk/locuss.

The research paper on which this article is based was published online in the May 17, 2013 edition of the Astrophysical Journal Letters: N. Okabe et al., "LoCuSS: The Mass Density Profile of Massive Galaxy Clusters at z=0.2", Volume 769, Number 2, Article ID. 35 (2013). The paper's authors are as follows:

This research was based in part on the following:

This research was supported in part by funding from:

Professor Masahiro Takada
Kavli Institute for the Physics and Mathematics of the Universe, The University of Tokyo, Japan
+81-4-7136-6510
masahiro.takada@ipmu.jp