February 25, 2014
Kavli Institute for the Physics and Mathematics of the Universe (Kavli IPMU)

The J-PARC Neutrino Beam Group, which includes assistant professor Mark Hartz at Kavli IPMU, has won the 2013 Suwa award for their contribution to the discovery of electron neutrino appearance in the T2K Experiment by creating and operating the highest intensity neutrino beam facility.  The award ceremony was held on February 17 in Chiyoda-ku, Tokyo.

Suwa award is established by the Foundation for High Energy Accelerator Science (FAS) and is given to researchers, engineers and research groups who accomplished a great achievement such as a long-term contribution to the development of the high energy accelerator science.

"It has been a great pleasure to collaborate with the members of the J-PARC Neutrino Beam Group over the last 5 years," said Hartz, "This group exemplifies scientific achievement through dedication, hard work and strong international collaboration. The Suwa Award honors the achievements of the J-PARC Neutrino Beam Group, and I am happy to have made a contribution to those achievements." Hartz has contributed to build, commission and operate the Optical Transition Monitor, which monitors the proton beam to produce the neutrino beam. He also led the modeling the simulation of the neutrino flux produced in this beam line. 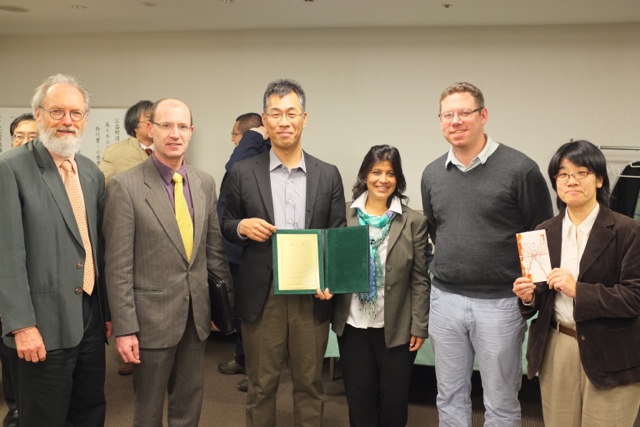 T2K (Tokai to Kamioka) is a long-baseline neutrino experiment in Japan, and is studying neutrino oscillations. Neutrinos are elementary particles which come in three “flavours”: electron, muon, and tau. They only interact through the weak force, and are very difficult to detect as they rarely interact with matter. T2K has made a search for oscillations from muon neutrinos to electron neutrinos, and announced the first experimental indications for them in June 2011. These oscillations had never been observed by any previous experiment. http://t2k-experiment.org/

J-PARC (Japan Proton Accelerator Research Complex) consists of a series of world-class proton accelerators and the experimental facilities that make use of the high-intensity proton beams. Open to users from around the globe. J-PARC is a multi-purpose and multidisciplinary facility that is unique in the variety of secondary-particle beams produced and put to use in cutting-edge research across a wide range of scientific fields. Neutron, pion, kaon and neutrino beams are all produced at J-PARC via collisions between the proton beams and target materials (spallation reactions). The applications of these beams include fundamental nuclear and particle physics, materials and life science, and nuclear technology. http://j-parc.jp/index-e.html