Kashiwa Japan - A team of researchers led by Robert Quimby at the Kavli Institute for the Physics and Mathematics of the Universe (Kavli IPMU) has announced the discovery of a galaxy that magnified a background, Type Ia supernova thirtyfold through gravitational lensing. This is the first example of strong gravitational lensing of a supernova confirms the team's previous explanation for the unusual properties of this supernova.

The team has further shown how such discoveries of supernovae of Type Ia (SNIa) can be made far more common than previously thought possible. SNIa seen through gravitational lenses can be used to make a direct measurement of the universe's expansion rate (the Hubble parameter), so this discovery may have a significant impact on how cosmic expansion is studied in the future.

Supernovae of Type Ia (SNIa) are tremendously useful to understand the mysterious components of the Universe such as dark energy and dark matter. SNIa have strikingly similar peak luminosities, regardless of where they happen in the Universe. This property allows astronomers to use SNIa as standard candles to measure cosmological distance independent of the Universe’s expansion. Distance measurement with SNIa was key to the discovery of accelerating expansion of the Universe (2011 Nobel Prize in Physics).

In 2010, a supernova named PS1-10afx was found that demonstrated the same color and light curve (the change in brightness over time) as a Type Ia supernova, but its peak brightness was 30 times greater than expected. This discovery was made using the Panoramic Survey Telescope & Rapid Response System 1 (Pan-STARRS1, a telescope located in Hawai’i that can image the entire visible sky several times each month). This anomaly led some to conclude that it was a completely new type of superluminous supernova. “PS1-10afx looked a lot like a Type Ia supernova, ” says Quimby, “but it was just too bright.”

The physics of Type Ia supernovae have been studied in detail over the past three decades, and there is no known way to produce a Type Ia supernova with normal colors and a normal light curve but a substantially higher luminosity.

“Generally, the rare supernovae that have been found to shine brighter than Type Ia usually have higher temperatures (bluer colors) and larger physical sizes (and thus slower light curves),” Quimby continues, “New physics would thus be required to explain PS1-10afx as an intrinsically luminous supernova.”

“We found a second explanation,” says Marcus Werner, Mathematical Physicist at the Kavli IPMU, “and it required only well demonstrated physics: gravitational lensing. If there was a massive galaxy in front of PS1-10afx, it could warp space-time to form magnified images of the supernova.”

“Although the available observations were consistent with the hypothesis of our team, we needed to answer the question: Where was the lens galaxy?” says Anupreeta More, Astronomer at the Kavli IPMU, “The existing data clearly showed the presence of the supernova's host galaxy, but there was no evidence for the necessary foreground galaxy. We then tried to find the evidence.” 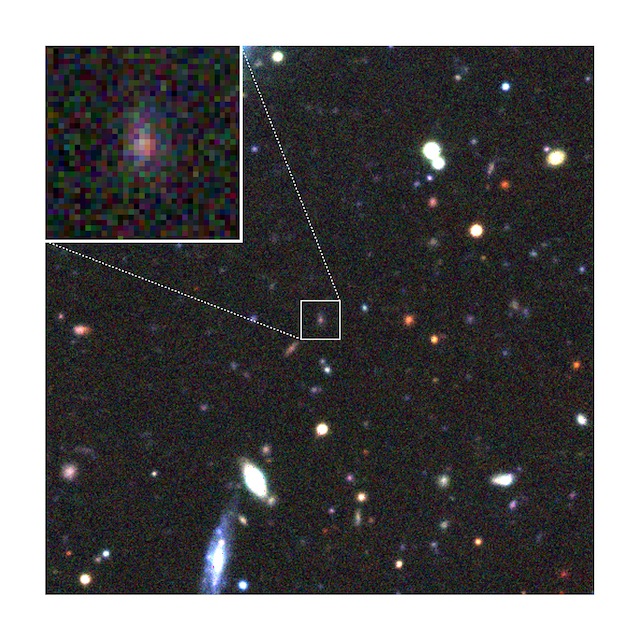 Canada-France-Hawaii-Telescope (CFHT) image of the field before the supernova. (Credit: Kavli IPMU / CFHT)

In September 2013, Quimby's team set out to find the hidden lens. Using the Low-Resolution Imaging Spectrograph on the 10 meter Keck-I telescope located in Hawai’i, they spent 7 hours collecting light at the location of PS1-10afx, which had by then faded away itself.

“After carefully extracting the signal from the data, we had confirmation.” More continues, “Buried in the glare of the relatively bright host galaxy, we found a second, foreground galaxy. This second galaxy was faint enough to have previously gone unnoticed. But our analysis showed that it was still the right size to explain the gravitational lensing of PS1-10afx.” 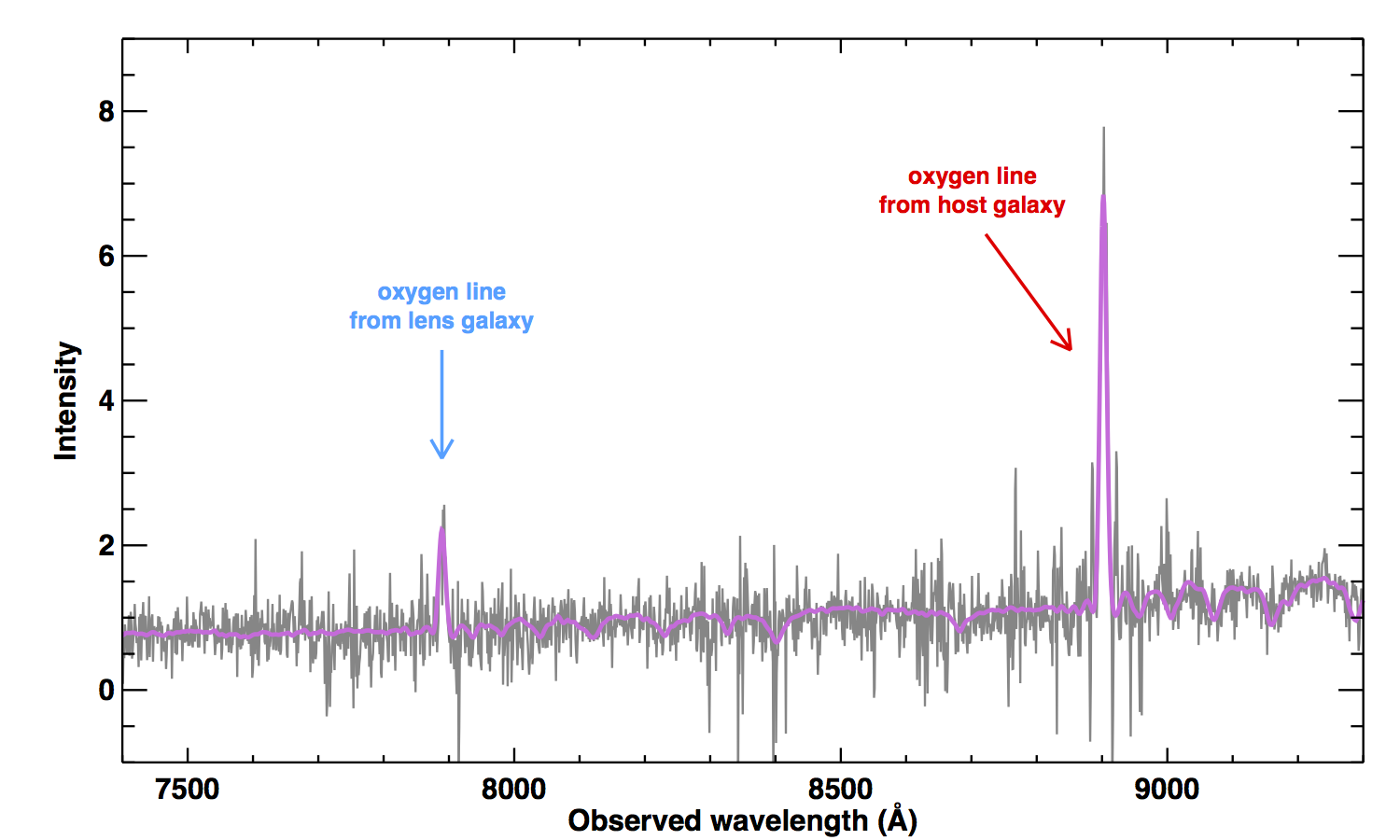 “We had existing predictions of what a gravitationally lensed Type Ia supernova would look like,” says Masamune Oguri from the Department of Physics at the University of Tokyo, “But the small size of this lens galaxy and the large magnification it produced was not exactly what we were expecting for the first discovery.” Oguri continues, “However, this system may very well prove typical of discoveries to come. Because more distant supernovae are more likely to be gravitationally lensed, lensed supernovae are typically highly magnified and located in the distant universe.”

“In the future, when a target is identified as a possible lensed Type Ia supernova,” says Quimby, ”high-resolution follow-up observations can be taken to resolve the individual image components.” Each image comes from the same source but travels a different path length on its way to the observer, so there is an arrival time difference between these multiple supernova images. If this “time delay” can be measured, a direct test of cosmic expansion is possible, faster expansion leads to shorter time delays. By timing the delays precisely and comparing these to the delay expected from the geometry of the lens, expansion history of the Universe can be directly inferred. Quimby continues, “The discovery and selection method we have crafted may thus soon improve our understanding of our expanding universe.

Schematic animation of Supernova PS1-10afx being gravitationally lensed by a galaxy in between the supernova and us. Top panel shows the effect of strong gravitational lensing which produces multiple images of PS1-10afx and gives rise to a net 30-fold magnification as observed. The bottom panel shows PS1-10afx without the gravitational lens. Such lensed supernovae can be used to accurately determine the expansion rate of the Universe if the multiple images of can be promptly observed with high angular resolution. (Credit: Surhud More,Kavli IPMU, Images of galaxies: ESA NASA Hubble Heritage project and the SDSS)

Anupreeta More
Kavli Institute for the Physics and Mathematics of the Universe, The University of Tokyo
anupreeta.more_at_ipmu.jp

Yoshihisa Obayashi, Kavli Institute for the Physics and Mathematics of the Universe, The University of Tokyo
+81-4-7136-5974, press_at_ipmu.jp