A group of researchers led by Melina Bersten of Kavli IPMU recently presented a model that provides the first characterization of the progenitor for a hydrogen-deficient supernova. Their model predicts that a bright hot star, which is the binary companion to an exploding object, remains after the explosion. To verify their theory, the group secured observation time with the Hubble Space Telescope (HST) to search for such a remaining star. Their findings, which are reported in the October 2014 issue of The Astronomical Journal, have important implications for the evolution of massive stars. 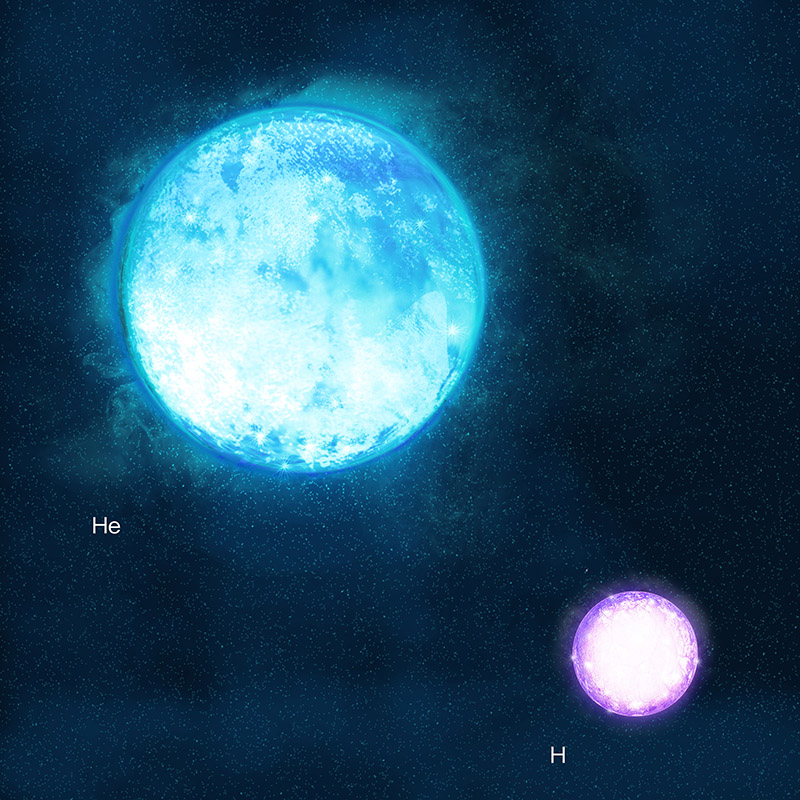 For years astronomers have searched for the elusive progenitors of hydrogen-deficient stellar explosions without success. However, this changed in June 2013 with the appearance of supernova iPTF13bvn and the subsequent detection of an object at the same location in archival images obtained before the explosion using the HST. The interpretation of the observed object is controversial. The team led by Bersten presented a self-consistent picture using models of supernova brightness and progenitor evolution. In their picture, the more massive star in a binary system explodes after transferring mass to its companion.

One of the challenges in astrophysics is identifying which star produces which supernova. This is particularly problematic for supernovae without hydrogen, which are called Types Ib or Ic, because the progenitors have yet to be detected directly.

However, the ultimate question is: “How do progenitor stars remove their hydrogen-rich envelopes during their evolution?” Two competing mechanisms have been proposed. One hypothesizes that a strong wind produced by a very massive star blows the outer hydrogen layers, while the other suggests that a gravitationally bound binary companion star removes the outer layers. The latter case does not require a very massive star. Because these two scenarios predict vastly different progenitor stars, direct detection of the progenitor for this type of supernova can provide definitive clues about the preferred evolutionary path.

When young Type Ib supernova iPTF13bvn was discovered in nearby spiral galaxy NGC 5806, astronomers hoped to find its progenitor. Inspecting the available HST images did indeed reveal an object, providing optimism that the first hydrogen-free supernova progenitor would at last be identified. Due to the object’s blue hue, it was initially suggested that the object was a very hot, very massive, evolved star with a compact structure, called a “Wolf-Rayet” star. (Using models of such stars, a group based in Geneva was able to reproduce the brightness and color of the pre-explosion object with a Wolf-Rayet star that was born with over 30 times the mass of the Sun and died with 11 times the solar mass.)

"Based on such suggestions, we decided to check if such a massive star is consistent with the supernova brightness evolution," says Melina Bersten. However, the results are inconsistent with a Wolf-Rayet star; the exploding star must have been merely four times the mass of the Sun, which is much smaller than a Wolf-Rayet star. “If the mass was this low and the supernova lacked hydrogen, our immediate conclusion is that the progenitor was part of a binary system,” adds Bersten.

Because the problem requires a more elaborate solution, the team set out to simulate the evolution of a binary system with mass transfer in order to determine a configuration that can explain all the observational evidence (a blue pre-explosion object with a relatively low mass devoid of hydrogen). “We tested several configurations and came up with a family of possible solutions,” explains Omar Benvenuto of IALP, Argentina. “Interestingly, the mass transfer process dictates the observational properties of the exploding star, so it allows suitable solutions to be derived even if the mass of the stars is varied,” adds Benvenuto. The team chose the case where two stars are born with 20 and 19 times the mass of the Sun. The mass transfer process causes the larger star to retain only four times the solar mass before exploding. Most importantly, the smaller star may trap part of the transferred mass, becoming a very bright and hot star.

The existence of a hot star would provide strong evidence for the binary model presented by Bersten and collaborators. Fortunately, such a prediction can be directly tested once the supernova fades because the hot companion should become evident. “We have requested and obtained observation time with the HST to search for the companion star in 2015,” comments Gaston Folatelli of Kavli IPMU. “Until then, we must wait patiently to see if we can identify the progenitor of a hydrogen-free supernova for the first time,” Bersten adds.

All figures are found at http://web.ipmu.jp/press/iptf13bvn 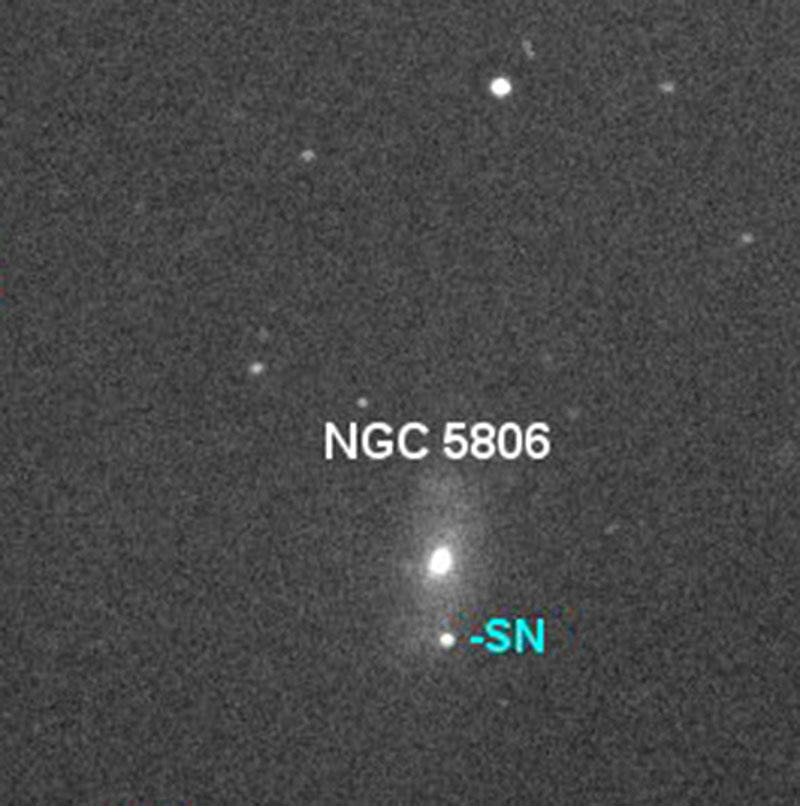 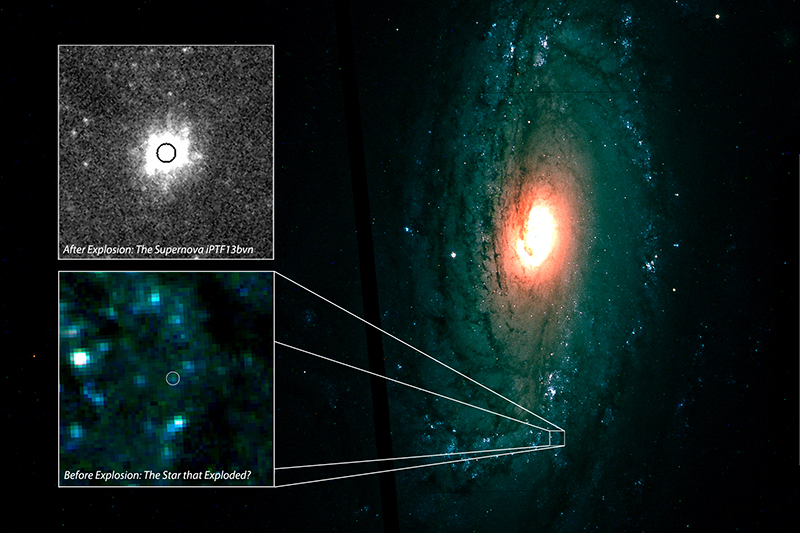 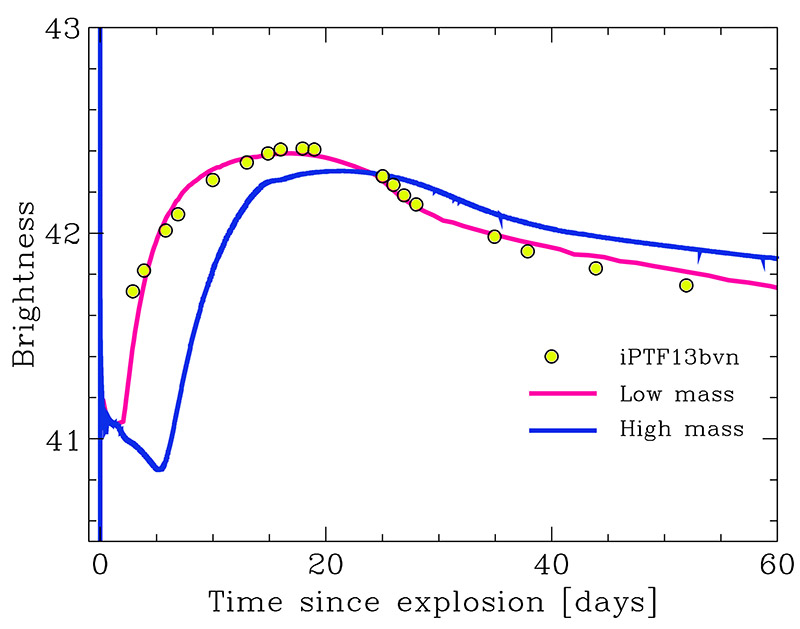 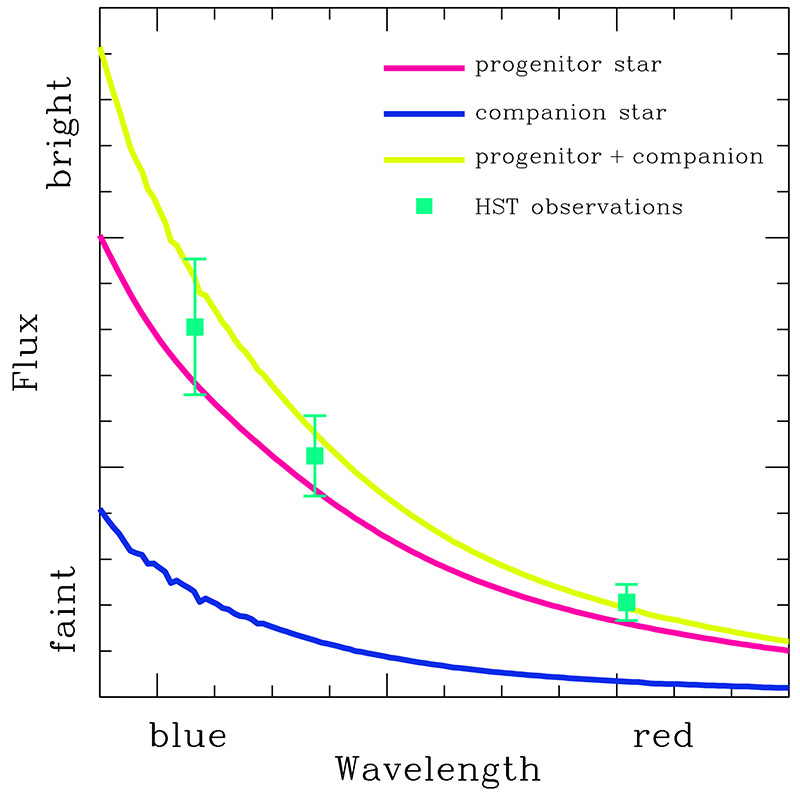 Title: iPTF13bvn: The First Evidence of a Binary Progenitor for a Type Ib Supernova

1 Kavli Institute for the Physics and Mathematics of the Universe (WPI), The University of Tokyo, 5-1-5 Kashiwanoha, Kashiwa, Chiba 277-8583, Japan

Project Researcher, Kavli Institute for the Physics and Mathematics of the Universe, The University of Tokyo, melina.bersten@ipmu.jp

*From November 1st, Scientific Researcher at National Scientific and Technical Research Council - Argentina and Visiting Scientist at Kavli Institute for the Physics and Mathematics of the Universe, The University of Tokyo.

Ken'ichi Nomoto, Kavli Institute for the Physics and Mathematics of the Universe, The University of Tokyo

Marina Komori, Kavli Institute for the Physics and Mathematics of the Universe, The University of Tokyo

Aya Tsuboi, Kavli Institute for the Physics and Mathematics of the Universe, The University of Tokyo