September 8, 2015
Kavli Institute for the Physics and Mathematics of the Universe (Kavli IPMU) 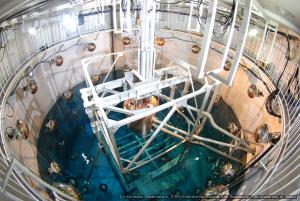 XMASS: Experimental setup of the XMASS at the Kamioka Observatory (credit: Kamioka Observatory, ICRR (Institute for Cosmic Ray Research), The University of Tokyo).
An experiment to test whether dark matter signals change throughout the year has found contradicting results to a previous experiment, announced an international team of researchers at the TAUP2015 conference in Italy this week.

There is strong evidence that dark matter exists in our universe, but no one has ever detected it. Among many candidates, it is thought to be some sort of particle, with the best candidate to date being a WIMP (Weakly Interacting Massive Particle). Positive results have already been reported in the past by the DAMA/LIBRA experiment in Italy, which had found evidence a dark matter signal modulated with a period of one year.

This is the first extensive search exploiting the annual modulation caused by the earth’s rotation around the sun.

In order to reduce systematic uncertainty and improve the XMASS result, the researchers will continue to take more data.

The XMASS program is an inter-university cooperative research program at Kamioka underground Observatory.
The XMASS experiment at Kamioka in Japan holds 832 kg of liquid xenon as a target material for the interaction of the dark matter particles. The detector is sensitive not only the nuclear recoil signal from WIMPs, but also the electron and gamma signals emitted from, for example, interactions with electrons in the Xe atoms of other candidates of dark matter.