October 15, 2015
Kavli Institute for the Physics and Mathematics of the Universe  (Kavli IPMU) 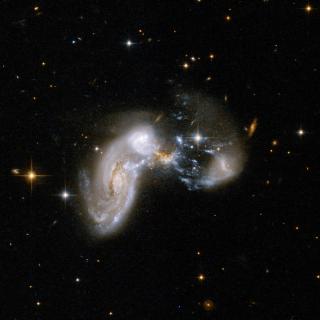 The majority of galaxies have been believed to lie on a “main sequence”, where the larger a galaxy’s mass the higher its rate of forming new stars. However, every now and then a galaxy will display a burst of newly-formed stars that shine brighter than the rest. A collision between two large galaxies is usually the cause of such starburst phases, where the cold gas residing in the giant molecular clouds becomes the fuel for sustaining such high rates of star formation.

The question astronomers have been asking is whether such starbursts in the early universe were the result of having an overabundant gas supply, or whether galaxies converted gas more efficiently.

A new study to be published in Astrophysical Journal letters on October 15, led by John Silverman at the Kavli Institute for the Physics and Mathematics of the Universe, studied carbon monoxide (CO) gas content in seven starburst galaxies far away from when the Universe was a young four billion years old. This was feasible by the advent of Atacama Large Millimeter Array (ALMA), located on a mountaintop plateau in Chile, which works in tandem to detect electromagnetic waves at a wavelength range in the millimeter (pivotal for studying molecular gas) and a sensitivity level that is just starting to be explored by astronomers today.

The researchers found the amount of CO-emitting gas was already diminished even though the galaxy continued to form stars at high rates. These observations are similar to those recorded for starburst galaxies near Earth today, but the amount of gas depletion was not quite as rapid as expected. This led researchers to conclude there might be a continuous increase in the efficiency depending on how high above the rate of forming stars is from the main sequence.

This study relied on a variety of powerful telescopes available through the COSMOS survey. Only the Spitzer and Herschel Observatories could measure accurate rates of star formation, and the Subaru Telescope could confirm the nature and distance of these extreme galaxies using spectroscopy.

“These observations clearly demonstrate ALMA’s unique capability to measure with ease a critical component of high redshift galaxies thus indicative of the remarkable results to come from ALMA.”

Figure 2: Left: Left: Map of the galaxy PACS-867 taken by ALMA where the emission from carbon monoxide (CO) shows the molecular gas reservoir out of which stars form. Center: Image taken by the Hubble Space Telescope Advanced Camera for Surveys of PACS-867 that shows the rest-frame UV light from young stars in the individual components of highly disturbed galaxies as a result of a massive merger. The location of the molecular gas in Image 1 is overlaid (blue contours) that shows where new stars, enshrouded by dust, are forming. Right: Spitzer Space Telescope infrared image (3.6 micron) of PACS-867 highlights the stars embedded in dust and associated with the molecular gas. The UV light associated with the gas is faint while it is brighter in the infrared. This is due to the presence of dust that impacts the UV more than the IR.
Left image credit: ALMA (ESO/NAOJ/NRAO), J. Silverman (Kavli IPMU), Center image credit: NASA/ESA Hubble Space Telescope, ALMA (ESO/NAOJ/NRAO), J. Silverman (Kavli IPMU), Right image credit: NASA/Spitzer Space Telescope, ALMA (ESO/NAOJ/NRAO), J. Silverman (Kavli IPMU)

Motoko Kakubayashi
Press officer, Kavli Institute for the Physics and Mathematics of the Universe
E: press_at_ipmu.jp
F: +81-4-7136-4941
* Please change _at_ to @

John Silverman
Project Assistant Professor, Kavli Institute for the Physics and Mathematics of the Universe
E: John.silverman_at_ipmu.jp
* Please change _at_ to @