Aug 8, Event to Support Science Courses Selection by Girls in Junior and Senior High School Prior to a Visit by the former Deputy Director of Fermilab

Aug 8, Event to Support Science Courses Selection by Girls in Junior and Senior High School Prior to a Visit by the former Deputy Director of Fermilab

July 26, 2016
The University of Tokyo, Institutes for Advanced Study
Kavuli Institute for the Physics and Mathematics of the Universe 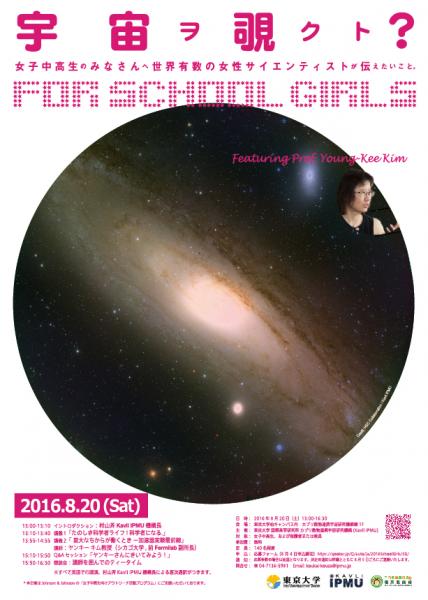 On August 20, 2016 the University of Tokyo’s Kavli Institute for the Physics and Mathematics of the Universe (Kavli IPMU), located at the Kashiwa campus, will hold an event for girls in junior high school and high school.

Dr. Young-Kee Kim, who was a Deputy Director of US-based Fermi National Accelerator Laboratory (Fermilab), will be our guest. In this friendly setting, why don’t you come to listen to one of the world’s leading female researchers—in her own words?

The language to be used is English, and Hitoshi Murayama, the Director of Kavli IPMU, will provide consecutive interpretation (in Japanese).

Dr. Young-Kee Kim was a Deputy Director at Fermilab. What kind of person was she in childhood? What opportunities directed her path to becoming a scientist? Is the daily life of a researcher tough? Let’s listen to the facts of Dr. Kim’s life.

Lecture 2: “The enormous power at work at the forefront of accelerator experiments.”

Due to the accelerator experiments carried out at the European Organization for Nuclear Research (CERN), the discovery of the Higgs boson was hailed, in 2012, as a major achievement of the century. What is an accelerator experiment? Why are scientists so passionate about it? Let’s listen to the former Deputy Director of Fermilab Dr. Young-Kee Kim, who is also active in experiments at CERN.

Teatime around the lecturer

1962: Born in Korea. After obtaining a master's degree at Korea University, Dr. Kim received a PhD from the University of Rochester in the United States. She was an assistant professor and an associate professor at the University of California, Berkeley, where she has been a professor since 2003. From 2004 to 2006, Dr. Kim was co-leader of the Collider Detector at Fermilab (CDF) experiment, and between 2006 and 2013, she served as a Deputy Director at Fermilab. With a typically energetic and active personality, but without fanfare, Dr. Kim has gained in popularity. Her area of expertise is particle physics.