Blue is an indicator of first star’s supernova explosions

Blue is an indicator of first star’s supernova explosions

July 11, 2016
Kavli Institute for the Physics and Mathematics of the Universe (Kavli IPMU) 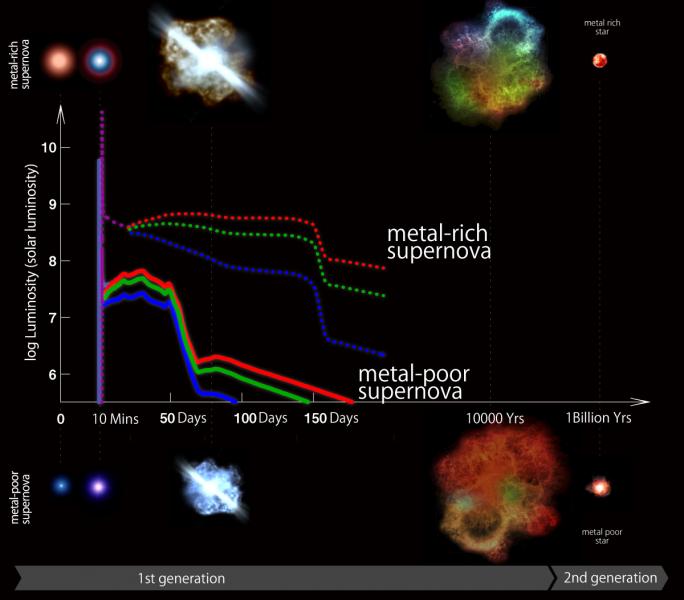 An international collaboration led by the Kavli Institute for the Physics and Mathematics of the Universe (Kavli IPMU) have discovered that the color of supernovae during a specific phase could be an indicator for detecting the most distant and oldest supernovae in the Universe - more than 13 billion years old.

For 100 million years after the big bang, the Universe was dark and filled with hydrogen and helium. Then, the first stars appeared, and heavier elements (referred to as "metals", meaning anything heavier than helium) were created by thermonuclear fusion reactions within stars.

A new study published in The Astrophysical Journal, led by Kavli IPMU Project Researcher Alexey Tolstov, identified characteristic changes between these supernovae types after experimenting with supernovae models based on extremely metal-poor stars with virtually no metals. These stars make good candidates because they preserve their chemical abundance at the time of their formation.

“The explosions of first generation of stars have a great impact on subsequent star and galaxy formation. But first, we need a better understanding of how these explosions look like to discover this phenomenon in the near future. The most difficult thing here is the construction of reliable models based on our current studies and observations. Finding the photometric characteristics of metal poor supernovae, I am very happy to make one more step to our understanding of the early Universe.” said Tolstov.

Similar to all supernovae, the luminosity of metal-poor supernovae show a characteristic rise to a peak brightness followed by a decline. The phenomenon starts when a star explodes with a bright flash, caused by a shock wave emerging from the surface of the progenitor stars after the core collapse phase. Shock breakout is followed by a long ''plateau'' phase of almost constant luminosity lasting several months, before a slow exponential decay. 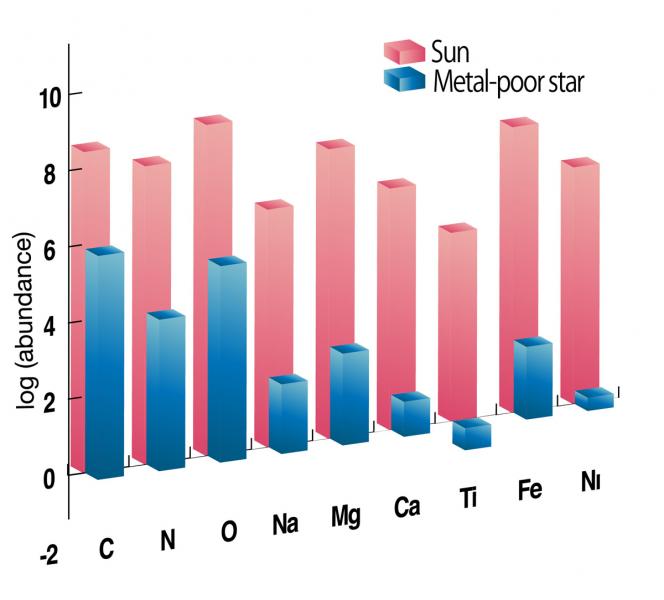 The team calculated light curves of metal-poor supernova, produced by blue supergiant stars, and “metal-rich” red supergiant stars. Both shock breakout and “plateau” phases are shorter, bluer, and fainter for metal-poor supernova in comparison with “metal-rich” supernova. The team concluded the color blue could be used as an indicator of a low-metallicity progenitor. The expanding universe makes it difficult to detect first star and supernova radiation, which shift into the near-infrared wavelength.

But in the near future new large telescopes such as the James Webb Space Telescope, scheduled to be launched in 2018, will be able to detect the first explosions of stars in the Universe, and may be able to identify them using this method. Details of this study were published on April 21, 2016.

Research contacts：
Alexey Tolstov
Project Researcher
Kavli Institute for the Physics and Mathematics of the Universe
E-mail: alexey.tolstov_at_ipmu.jp
* change _at_ to @

Ken'ichi Nomoto
Principal Investigator and Project Professor
Kavli Institute for the Physics and Mathematics of the Universe
TEL: +81-04-7136-6567
E-mail: nomoto_at_astron.s.u-tokyo.ac.jp
* change _at_ to @

All images can be downloaded from this page: http://web.ipmu.jp/press/201606-BlueAndMetal/