Ancient Eye in the Sky

Ancient Eye in the Sky

July 26, 2016
The University of Tokyo, Institutes for Advanced Study
Kavuli Institute for the Physics and Mathematics of the Universe

In a rare discovery, the National Astronomical Observatory of Japan (NAOJ) together with an international team of researchers from the University of Tokyo’s Graduate School of Science and the Institute of Advanced Studies’ Kavli Institute for the Physics and Mathematics of the Universe (Kavli IPMU) advanced knowledge of how light from a distant galaxy can be bent greatly by the gravitational effect of a foreground galaxy. The effect is known as strong gravitational lensing.

Based on data from the Sloan Digital Sky Survey, the lensing galaxy has a spectroscopic redshift of z = 0.79 (or 7.0 billion light-years away, Note 1). Further observations of the lensed objects using the infrared-sensitive FIRE spectrometer on the Magellan Telescope confirmed the existence of two galaxies behind the lens—one at z = 1.30 and the other at z = 1.99 (9.0 and 10.5 billion light-years away, respectively). This is the first DSP lens for which the distances to all the three galaxies are known accurately, which enables more accurate understanding of the mass distribution of the foreground galaxy.

Researchers and undergraduates made the discovery while visually inspecting images at the NOAJ headquarters in Mitaka, Tokyo as part of a Subaru Telescope invitation for students in September 2015. The images were gathered from the Subaru Telescope’s Hyper Suprime-Cam (HSC), which is mounted in Hawaii. Japan is conducting a widespread survey with the HSC of large areas of the sky at an unprecedented depth as part of the Subaru Strategic Program.

“When I was looking at HSC images with the students, we came across a ring-like galaxy and we immediately recognized it as a strong lens system-lens,” said lead author of the paper Masayuki Tanaka. “The discovery would not have been possible without the large survey data to find such a rare object, as well as the deep, high quality images to detect light from distant objects.” 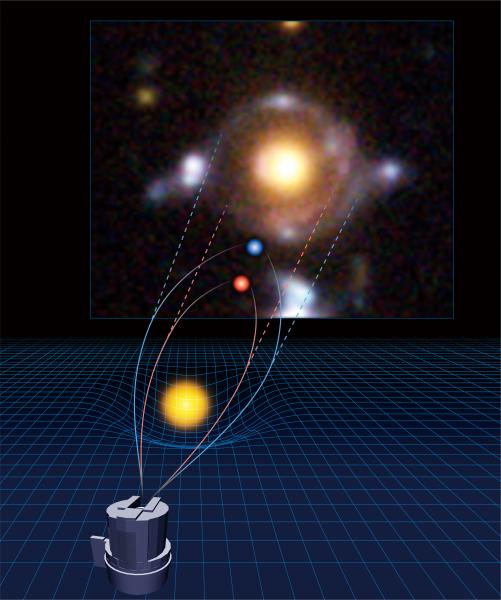 The rare finding has been dubbed the “Eye of Horus” because of its eye-like appearance (including bright knots, an arc, and a complete Einstein ring), which is due to an alignment of the central lens galaxy and both sources, and resembles the eye of Horus, the ancient Egyptian sky god. The survey expects to find 10 more systems of the same kind.

“With the HSC survey, we expect to find about 10 DSP lens systems, providing new insights in the physics of galaxies and the expansion of the universe over the last several billion years,” said Anupreeta More, a researcher at the Kavli IPMU and a co-author of the paper.

Researchers involved in the discovery include Kavli IPMU Project Researcher Anupreeta More and Project Researcher Alessandro Sonnenfeld as well as Associate Scientist Masamune Oguri, who is also affiliated to the University of Tokyo Graduate School of Science, Department of Physics.

Contact:
John Amari
Press Office
Kavli Institute for the Physics and Mathematics of the Universe
Institutes for Advanced Study
The University of Tokyo
TEL: +81-04-7136-5980
E-mail: press_at_ipmu.jp
*change _at_ to @