Observation of Excess Events in the XENON1T Dark Matter Experiment

Observation of Excess Events in the XENON1T Dark Matter Experiment

June 17, 2020
Kavli Institute for the Physics and Mathematics of the Universe (Kavli IPMU) 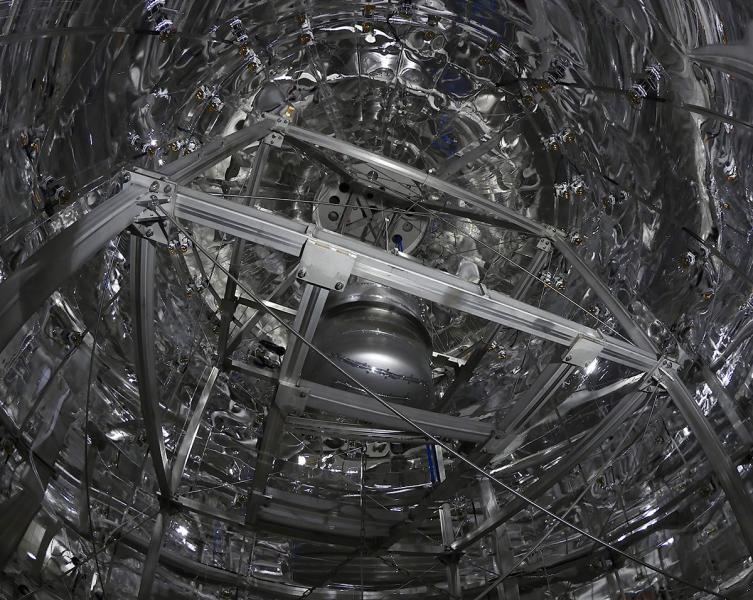 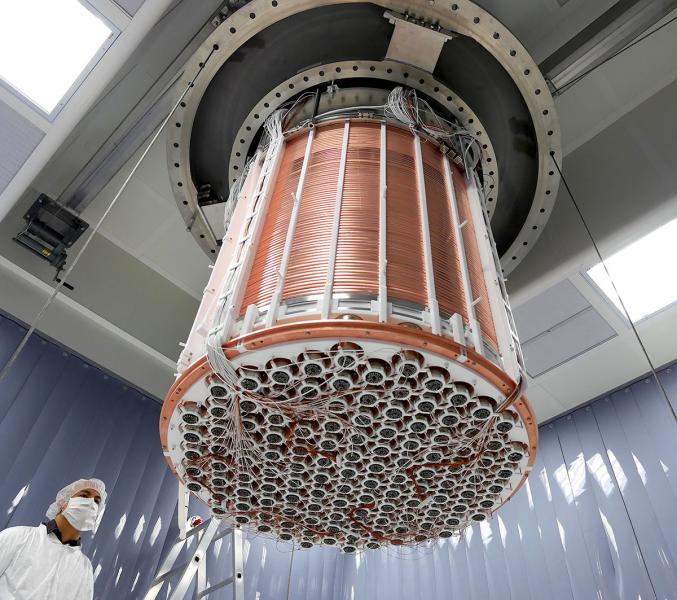 The scientists do not claim to have found dark matter. Instead, they say to have observed an unexpected rate of events, the source of which is not yet fully understood. The signature of the excess is similar to what might result from a tiny residual amount of tritium (a hydrogen atom with one proton and two neutrons), but could also be a sign of something more exciting—such as the existence of a new particle known as the solar axion or the indication of previously unknown properties of neutrinos.

XENON1T was operated deep underground at the INFN Laboratori Nazionali del Gran Sasso in Italy, from 2016 to 2018. It was primarily designed to detect dark matter, which makes up 85% of the matter in the universe. So far, scientists have only observed indirect evidence of dark matter, and a definitive, direct detection is yet to be made. So-called WIMPs (Weakly Interacting Massive Particles) are among the theoretically preferred candidates, and XENON1T has thus far set the best limit on their interaction probability over a wide range of WIMP masses. In addition to WIMP dark matter, XENON1T was also sensitive to different types of new particles and interactions that could explain other open questions in physics. Last year, using the same detector, these scientists published in Nature the observation of the rarest nuclear decay ever directly measured.

The XENON1T detector was filled with 3.2 tonnes of ultra-pure liquefied xenon, 2.0 t of which served as a target for particle interactions. When a particle crosses the target, it can generate tiny signals of light and free electrons from a xenon atom. Most of these interactions occur from particles that are known to exist. Scientists therefore carefully estimated the number of background events in XENON1T. When data of XENON1T were compared to known backgrounds, a surprising excess of 53 events over the expected 232 events was observed.

This raises the exciting question: where is this excess coming from?

One explanation could be a new, previously unconsidered source of background, caused by the presence of tiny amounts of tritium in the XENON1T detector. Tritium, a radioactive isotope of hydrogen, spontaneously decays by emitting an electron with an energy similar to what was observed. Only a few tritium atoms for every 1025 (10,000,000,000,000,000,000,000,000!) xenon atoms would be needed to explain the excess. Currently, there are no independent measurements that can confirm or disprove the presence of tritium at that level in the detector, so a definitive answer to this explanation is not yet possible.

More excitingly, another explanation could be the existence of a new particle. In fact, the excess observed has an energy spectrum similar to that expected from axions produced in the Sun. Axions are hypothetical particles that were proposed to preserve a time-reversal symmetry of the nuclear force, and the Sun may be a strong source of them. While these solar axions are not dark matter candidates, their detection would mark the first observation of a well-motivated but never observed class of new particles, with a large impact on our understanding of fundamental physics, but also on astrophysical phenomena. Moreover, axions produced in the early universe could also be the source of dark matter.

Alternatively, the excess could also be due to neutrinos, trillions of which pass through your body, unhindered, every second. One explanation could be that the magnetic moment (a property of all particles) of neutrinos is larger than its value in the Standard Model of elementary particles. This would be a strong hint to some other new physics needed to explain it.

Of the three explanations considered by the XENON collaboration, the observed excess is most consistent with a solar axion signal. In statistical terms, the solar axion hypothesis has a significance of 3.5 sigma, meaning that there is about a 2/10,000 chance that the observed excess is due to a random fluctuation rather than a signal. While this significance is fairly high, it is not large enough to conclude that axions exist. The significance of both the tritium and neutrino magnetic moment hypotheses corresponds to 3.2 sigma, meaning that they are also consistent with the data.

XENON1T is now upgrading to its next phase–XENONnT–with an active xenon mass three times larger and a background that is expected to be lower than that of XENON1T. With better data from XENONnT, the XENON collaboration is confident it will soon find out whether this excess is a mere statistical fluke, a background contaminant, or something far more exciting: a new particle or interaction that goes beyond known physics.

The XENON collaboration comprises 163 scientists from 28 institutions across 11 countries. Results from this research were announced during an online seminar for researchers by the XENON collaboration on Wednesday, June 17 (16:00, Central European Summer Time; 23:00, Japan Standard Time).

A rare, radioactive, unstable isotope of hydrogen, Tritium has a nucleus containing one proton and two neutrons—unlike common hydrogen atoms, which contain one proton (hydrogen-1) or one proton and one neutron (hydrogen-2). Tritium is produced when cosmic rays fall down to Earth and react with oxygen and nitrogen in the atmosphere. Only very small amounts of the isotope can be found in the natural world.

An undiscovered but theoretically predicted elementary particle. The phenomenon that CP-symmetry is preserved has not been observed in experiments involving the strong nuclear force (strong interaction) only, and yet quantum chromodynamics (QCD), which describes the strong force, seems to preserve CP-symmetry. As there is no known basis in QCD why it should be preserved, this gives rise to a contradiction—called the strong CP problem. Particle physicists Roberto Peccei and Helen Quinn proposed a solution to this contradiction. The new symmetry shown by the Peccei-Quinn theory tries to resolve the CP problem by a spontaneous process of symmetry breaking that predicts—and results in—axions, the search for which is still being undertaken via various experiments.

When Japan joined the XENON collaboration to help upgrade the XENON1T detector to the XENONnT detector in December 2017, Kavli IPMU’s Principal Investigator and Associate Professor Kai Martens was one of the early proponents of this move in Japan, and a leader in our effort to integrate our Japanese team and our Japanese know-how and technology into the XENON collaboration’s efforts. In the meantime, the collaboration elected him to serve on both its Editorial Board, which directs its publications, and its Public Relations Team. At Kavli IPMU, we have Japan Society for the Promotion of Science (JSPS) and the Grants-in-Aid for Scientific Research (KAKENHI) support for bringing the Super-Kamiokande technology for high efficiency neutron detection in a water Cherenkov detector to the XENONnT neutron veto, and support for a bilateral international exchange program with XENON’s German group at the University of Münster, to develop a new technology to further reduce the radon background in the XENONnT liquid xenon target mass. In this way, Kavli IPMU helps to address the two main backgrounds to the dark matter search with XENON1T, and therewith to hopefully bring the world one step closer to finding those elusive dark matter particles.

Kavli Institute for the Physics and Mathematics of the Universe; Director, Kamioka Branch Office

Institute for Space-Earth Environmental Research; Kobayashi-Maskawa Institute for the Origin of Particles and the Universe

Kobayashi-Maskawa Institute for the Origin of Particles and the Universe