Oct 27, 2020
Kavli Institute for the Physics and Mathematics of the Universe (Kavli IPMU) 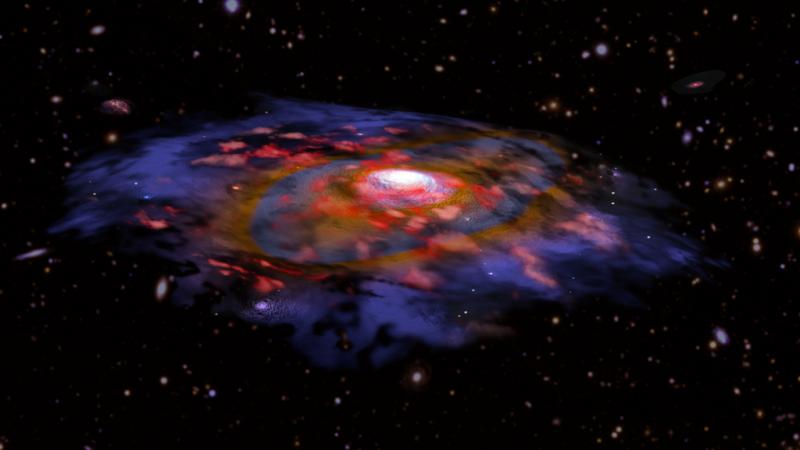 Massive galaxies were already much more mature in the early universe than previously expected. This was shown by an international team of astronomers—including researchers  from the Kavli Institute for the Physics and Mathematics of the Universe (Kavli IPMU) and the Kavli Institute for Cosmology (KICC)—who studied 118 distant galaxies with the Atacama Large Millimeter/submillimeter Array (ALMA).

Most galaxies formed when the universe was still very young. Our own galaxy, for example, likely started forming 13.6 billion years ago, in our 13.8 billion-year-old universe. When the universe was only ten percent of its current age (1-1.5 billion years after the Big Bang), most of the galaxies experienced a “growth spurt.” During this time, they built up most of their stellar mass and other properties, such as dust, heavy element content, and spiral-disk shapes, that we see in today’s galaxies. Therefore, if we want to learn how galaxies like our Milky Way formed, it is important to study this epoch.

In a survey called ALPINE (the ALMA Large Program to Investigate C+ at Early Times), an international team of astronomers studied 118 galaxies experiencing such a “growth spurt” in the early universe. “To our surprise, many of them were much more mature than we had expected,” said Andreas Faisst of the Infrared Processing and Analysis Center (IPAC) at the California Institute of Technology (Caltech).

“From previous studies, we understood that such young galaxies are dust-poor,” said Daniel Schaerer of the University of Geneva in Switzerland. “However, we find around 20 percent of the galaxies that assembled during this early epoch are already very dusty and a significant fraction of the ultraviolet light from newborn stars is already hidden by this dust,” he added. 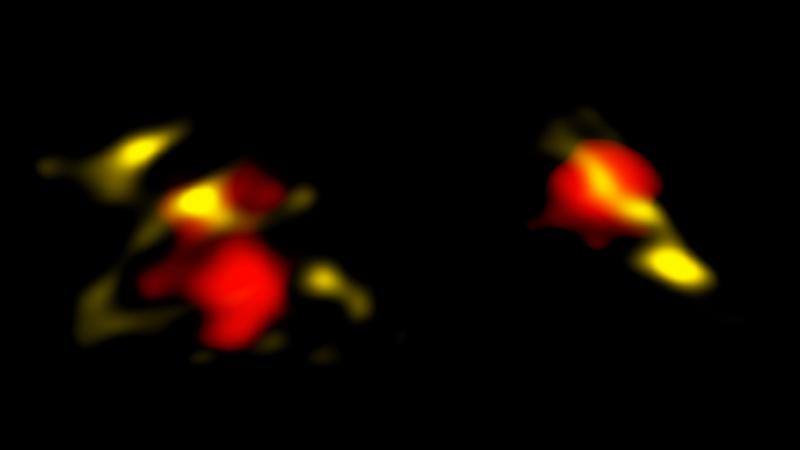 Many of the galaxies were also considered to be relatively grown-up because they showed a diversity in their structures, including the first signs of rotationally supported disks—which may later lead to galaxies with a spiral structure, as is observed in galaxies such as our Milky Way. Astronomers generally expect that galaxies in the early universe look like train wrecks because they often collide. “We see many galaxies that are colliding, but we also see a number of them rotating in an orderly fashion,” said John Silverman of Kavli IPMU in Japan. Gareth Jones, an ALPINE collaboration member from KICC at the University of Cambridge, added: “These detections are only possible because of the large sample size of ALPINE. For every galaxy that appears to be rotating, we find three colliding systems.”

ALMA has spotted very distant galaxies before, such as MAMBO-9 (a very dusty galaxy) and the Wolfe Disk (a galaxy with a rotating disk). But it was hard to say whether these discoveries were unique, or whether there were more galaxies like them out there. ALPINE is the first survey that enabled astronomers to study a significant number of galaxies in the early universe, and it shows that they might evolve faster than expected. But the scientists don’t yet understand how these galaxies grew up so fast, and why some of them already have rotating disks.

Observations from ALMA were crucial for this research because the radio telescope can see the star formation that is hidden by dust and trace the motion of gas emitted from star-forming regions. Surveys of galaxies in the early universe commonly use optical and infrared telescopes. These allow the measurement of the unobscured star formation and stellar masses. However, these telescopes have difficulties measuring dust obscured regions, where stars form, or the motions of gas in these galaxies. And sometimes they don’t see a galaxy at all. “With ALMA we discovered a few distant galaxies for the first time. We call these Hubble-dark, as they could not be detected even with the Hubble telescope,” said Lin Yan of Caltech.

To learn more about distant galaxies, the astronomers want to point ALMA at individual galaxies for a longer time. “We want to see exactly where the dust is and how the gas moves around. We also want to compare the dusty galaxies to others at the same distance, and figure out if there might be something special about their environments,” added Paolo Cassata of the University of Padua in Italy, formerly at the Universidad de Valparaíso in Chile.

ALPINE is the first and largest multi-wavelength survey of galaxies in the early universe. For a large sample of galaxies, the team collected measurements in the optical (including Subaru, VISTA, Hubble, Keck and VLT), infrared (Spitzer) and radio (ALMA). Multi-wavelength studies are needed to get the full picture of how galaxies are built up. “Such a large and complex survey is only possible thanks to the collaboration between multiple institutes across the globe,” said Matthieu Béthermin of the Laboratoire d’Astrophysique de Marseille in France.

The National Radio Astronomy Observatory is a facility of the National Science Foundation, operated under cooperative agreement by Associated Universities, Inc.

Speaking on the role played by the Kavli IPMU and the KICC in the ALPINE results, Dr. Chris Martin, director of physical sciences at The Kavli Foundation, said: “Astrophysics demonstrates the tremendous power of international collaborations in advancing scientific knowledge. It is a pleasure to see scientists from Kavli Institutes in the UK and Japan working together so closely in this global effort.”

About ALMA:
The Atacama Large Millimeter/submillimeter Array (ALMA), an international astronomy facility, is a partnership of the European Organisation for Astronomical Research in the Southern Hemisphere (ESO), the U.S. National Science Foundation (NSF) and the National Institutes of Natural Sciences (NINS) of Japan in cooperation with the Republic of Chile. ALMA is funded by ESO on behalf of its Member States, by NSF in cooperation with the National Research Council of Canada (NRC) and the Ministry of Science and Technology (MOST) and by NINS in cooperation with the Academia Sinica (AS) in Taiwan and the Korea Astronomy and Space Science Institute (KASI).

All ALPINE papers are dedicated to the memory of Olivier Le Fèvre, Principal Investigator of ALPINE.

A list of ALPINE publications to date can be found here: http://alpine.ipac.caltech.edu/#publications