March 19, 2021
Kavli Institute for the Physics and Mathematics of the Universe 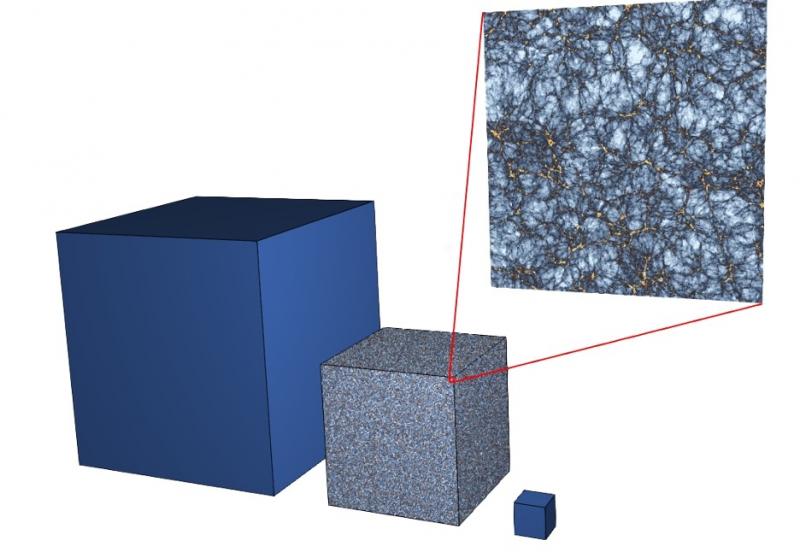 An international collaborative team of researchers including Takahiro Nishimichi from the Yukawa Institute for Theoretical Physics, Kyoto University, who is also a visiting scientist at the Kavli Institute for the Physics and Mathematics of the Universe (Kavli IPMU), and Masahiro Takada, a professor and principal investigator at the Kavli IPMU, has—for the first time—relied on a “cosmological challenge” that separated the data construction team   (based in Japan) and the data analysis teams (based in the United States) to test the data analysis pipelines of the latter against a virtual universe created by a supercomputer.

The researchers, some of whom are based at Stanford University; New York University; the European Organization for Nuclear Research (CERN); the Institute for Advanced Studies in Princeton, New Jersey; and the University of Science and Technology of China, were able to verify whether the cosmological parameters that govern the birth and evolution of the Universe can be correctly measured accurately via such methods.

The Japanese team used the ATERUI II supercomputer of the National Astronomical Observatory of Japan (NAOJ) to perform a large-scale and accurate simulation of the structure formation of the Universe. Then, the statistics that characterize the global spatial distribution pattern of the obtained universe were handed over to two teams of researchers on both coasts of the United States for analysis—but with the cosmological parameters used in the simulation, and detailed information about the characteristics of the galaxy, hidden.

The analysis pipelines by the US-based teams were successfully tested in the challenge, and the hidden cosmological parameters were correctly restored from the virtual universe created by the Japanese side to within 1.3 percent accuracy, at their worst. Their result is an order of magnitude more accurate than previous attempts to determine cosmological parameters based on simulated galaxy clustering data.

In order to measure cosmological parameters with even more accuracy in the future, and thereby approach even closer to the mysteries of dark matter and dark energy than before, the accuracy of methods of analysis used for large-scale surveys of the universe, such as in this study, will be relied upon.

Further, as it’s important for data modelling and data analysis teams to be able to verify their methods independently of each other, this research can be considered an important first step in a new effort to improve the analytical tools of the entire community of cosmologists. The results of their research were published online in the journal Physical Review D on December 28, 2020. 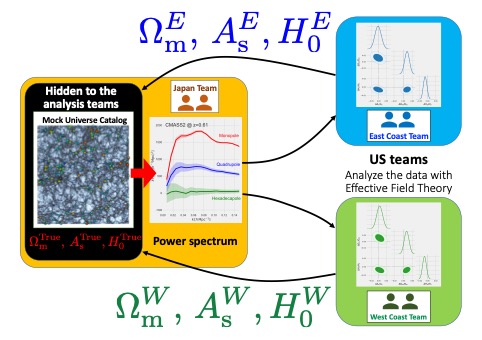 <BACKGROUND>
Based on the fundamental laws of physics and supported by the remarkable progress of observation instruments in recent years, observational cosmology—a maturing science of the structure, evolution, and origin of the Universe—is the largest scale of verification that empirical science can at present handle.

In particular, theoretical predictions and observational verification of the cosmic microwave background (CMB) following the Big Bang, which led to (one-third of) the 2019 Nobel Prize in Physics for James Peebles, have helped to establish a “standard model” of the Universe—called the Lambda cold dark matter (Lambda-CDM) model, it is fully specified by only several parameters, which consistently describes the evolution of the Universe from the era of the CMB right after the Big Bang until today.

However, within the framework of this “standard model,” unknown elements beyond the Standard Model of Elementary particle physics—such as dark matter and dark energy, which occupy most of the Universe—remain. Without an understanding of these properties, the true origin of the Universe will still be mysterious.

Along with the CMB, the importance of large-scale structure in the Universe—those patterns of the web structure of galaxies in neighbouring universes (Figure 1)—has been reaffirmed in recent years. While the CMB reveals the state of the primordial Universe shortly after its birth, large-scale structure depicts the state of the Universe since undergoing complex evolution up to the present.

By observing and analysing these elements in detail, it is expected that we will be able to approach the mysteries of dark matter and dark energy; both are thought to have a significant influence on the evolution of the Universe. In fact, plans for large-scale observations are in operation or underway around the world, including observations using  the Hyper Suprime-Cam (HSC) ultra-wide-field primary focus camera mounted on the Subaru Telescope, a project led by Japan.

To analyse data from these large-scale observations and derive new insights into the underlying mysteries of the Universe, it’s necessary to give accurate predictions of the structural evolution of the Universe based on physical theory. Thanks to the dramatic progress of observation technology over the previous decade, and the development of theoretical models that interpret observations derived from instruments, the range of cosmological parameters has been narrowed, leading to the age of “precision cosmology.”

And as observation data improves qualitatively and quantitively, the accuracy of predictions required of theoretical researchers has become high: It is expected that the amount of information that we can access will increase dramatically as observations become larger in the future. What is important here is to ensure the accuracy of the method of analysis itself—which correctly derives cosmological parameters from huge amounts of observational data—is improved, catching up with the ever more stringent statistical bounds from observation.

However, until now, the challenge has been confirmation bias. In this case, bias occurs when analysts trust values close to cosmological parameters already obtained from other observations. What’s more, since the accuracy of new analysis methods are usually verified with only limited types of simulated galaxy data with known properties, often produced internally among the collaborators, it wasn't known whether those could be applied universally to all kinds of galaxy samples in the real world, which could be even more complex than in computers.

<RESEARCH METHOD>
Given the above, a new challenge was undertaken by Japanese and American research teams to determine how accurately the parameters of Big Bang cosmology (the Lambda CDM model) could be determined from a computer-simulated Universe.

The Japanese team prepared simulation data of the Universe equivalent to a cube with a side of about 40 billion light years (Figure 1, centre), which was developed with the ATERUI II supercomputer. This data aimed to clarify how well the analytical methods that cosmologists have built up to this point are applicable to investigating larger areas of the Universe than ever before.

Similar studies conducted so far have been hampered by the high cost of calculations that accurately follow structure formation, and instead simulated cosmological data created by approximate calculations with less accuracy. Due to the highly reliable simulation technology developed by the Japanese team and the large-scale calculation enabled by ATERUI II, this research enabled the largest and most elaborate simulated Universe currently used in similar investigations to prepare the data.

More specifically, the Japanese team created galaxy data that imitated actual observations from the simulated universe, and measured the “power spectrum,” a standard statistical tool used to derive cosmological parameters. Then, they hid the parameters assumed in the computer simulation as well as the details of the simulated galaxy, and passed the power spectrum data to the two American teams, one based on the US east coast led by researchers at the Institute for Advanced Study, Princeton, and the other based on the west coast led by Stanford University. The two teams analyzed the power spectrum data and derived the hidden cosmological parameters used in the virtual universe (Figure 2).

<RESEARCH RESULTS>
Previously, the coastal teams had independently conducted research to apply a method called effective field theory, which has been used in quantum field theory, to the formation of the structure of the Universe. The teams used this method to analyze the power spectrum provided by the Japanese team and to estimate the cosmological parameters.

The values of the cosmological parameters finally reported by the two US teams reproduced the true values with an error of about 1 percent—which improves the accuracy of conventional cosmology parameter determination by an order of magnitude. The largest error was the total amount of dark matter in the simulated Universe, with reported values 1.3 percent from the true values for both teams. However, even with a perfectly correct analysis, this can happen with a probability of about 15 percent, so it can be said that these results were generally successful.

The most noteworthy aspect of the research was that the team used ATERUI II to create the largest simulated cosmological data ever for this kind of exercise. Thanks to this, they were able to reduce the error caused by the random statistical variation of the simulated cosmological data and verify the error caused by the analysis method itself that derived the parameters.

In addition, the hidden recipes for the mock galaxy data are different from that which the US teams used to verify their respective analysis methods. Thus the flexibility of the analytical models by the US teams about the nature of the galaxies was truly tested in such a way that any uncertainty in the galaxy formation and evolution process should not propagate to the values of the cosmological parameters derived in the analysis. This not only eliminated confirmation bias but also confirmed the universality of the analysis method in that it could be applied to any galaxy sample.

Masahiro Takada
Professor and Principal Investigator
Kavli Institute for the Physics and Mathematics of the Universe (Kavli IPMU), the University of Tokyo
TEL: 04-7136-6510
E-mail: masahiro.takada_at_ipmu.jp
Please change * _at_ to @

John Amari
Press officer
Kavli Institute for the Physics and Mathematics of the Universe, The University of Tokyo
TEL: 080-4056-2767
E-mail: press_at_ipmu.jp
Please change * _at_ to @