July 26, 2021
Kavli Institute for the Physics and Mathematics of the Universe (Kavli IPMU) 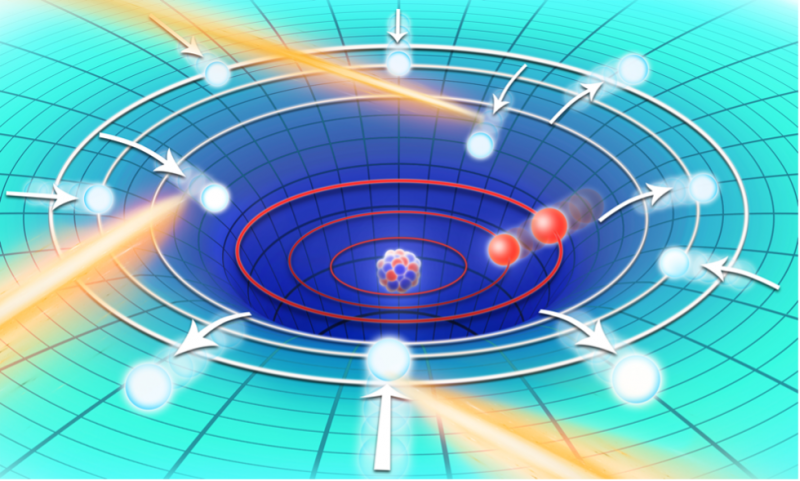 By adapting a detector developed for space X-ray observation, researchers have been able to capture the dynamics of muonic atom formation – a phenomenon that is over in a few tens of quadrillionths of a second, reports a new study in Physical Review Letters.

Muons are elementary particles. When an atom captures a negative muon, the muon kicks out many of the electrons spinning around the atom, creating an exotic atom called a “muonic atom” (figure 1). One feature of muonic atoms is that the orbital radius of the bound muon is about 1/200 of an electron and thus very close to the nucleus.

However, until today many of the features of the formation of muonic atoms have been a mystery. It had been accepted that when an atom is irradiated with a muon beam, the muon is initially captured in a highly excited level of the atom. The muon continues to deexcite from the excited level to the lower levels one after another while stripping off the surrounding bound electrons. On the other hand, the empty electronic holes created by the muon are refilled by bound electrons at the upper level, and also by surrounding atoms.

The entire muonic atom formation process is over in a few tens of femotoseconds (one femtosecond is one quadrillionth of a second, or one millionth of one billionth of a second), and to date no one knew specifically how the muon moves and how the electron configurations and numbers change accordingly.

The next problem was conventional semiconductor detectors lacked the resolution to measure the spectral shape of electronic characteristic X-rays.

To overcome this, the group used a transition-edge sensor (TES) detector, originally developed for space X-ray observation. Carrying out their experiments at J-PARC, a proton accelerator facility in Japan, it was observed that the spectra of the electronic K alpha and K beta X rays emitted from the muonic iron atoms had an asymmetrical shape with the spread of about 200 eV, respectively. Electronic characteristic X-rays called hyper-satellite (Kh alpha) X-rays were also discovered, which are emitted when there are two holes in the electronic ground level of the K shell (figure 2).

By comparing the shape of the X-ray spectrum of the experimental results with the simulation results (figure 3), the researchers clarified the dynamics of the muonic atom formation process. After being captured by an iron atom, the muon reaches the lowest energy base level in about 30 femtoseconds. Of the 26 total bound electrons of the iron atom, 7 to 8 are ejected in the first 6 femtoseconds, but are refilled relatively slowly from the surrounding iron atoms and return to their original state in about 30 femtoseconds. From the comparison with the experimental results, it was found that the refilling rate is 0.35 fs-1 (one electron transfer to the muon iron atom occurs during 2.9 femtoseconds).

“This experiment was carried out as part of a project that I am a leader of, which is to carry out unprecedented cross-disciplinary research. One of the features of the project is to connect each of the research program activities sideways. So we had members from my program, which is the novel and interdisciplinary application of hard X-ray and gamma-ray detectors, take part in the muon beam experiments. Even for me, my role was to plan, secure beam time on the accelerator, check the results, and help plan the next experiments,” said Takahashi.

The group’s results could greatly contribute to the development of new research fields including the dynamics of exotic quantum few-body systems such as muonic atoms.

Details of the study were published online in Physical Review Letters on July 27 as an Editors’ Suggestion. 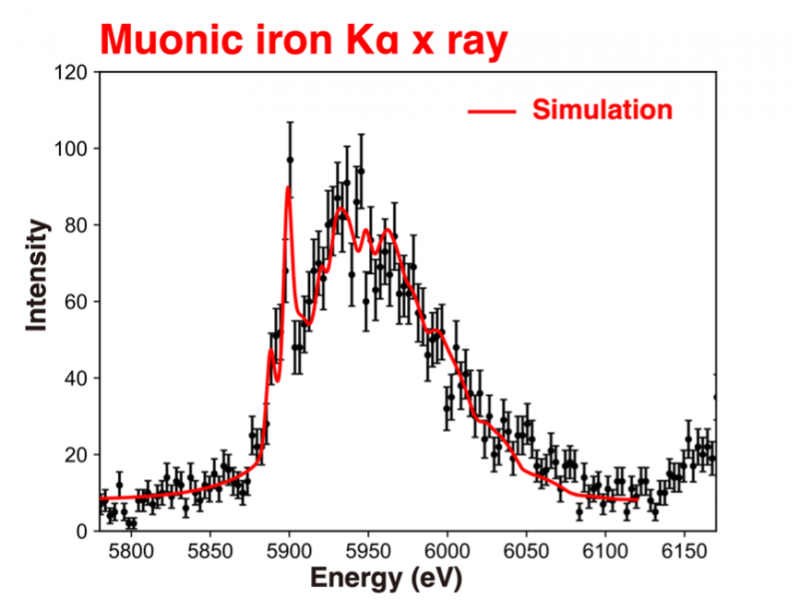 Acknowledgement
This work was supported by the JSPS KAKENHI (Grant-in-Aid for Scientific Research on Innovative Areas, Toward new frontiers: encounter and synergy of state-of-the- art astronomical detectors and exotic quantum beams 18H05457, 18H05458, 18H05460, 18H05461, 18H05463, and 18H05464, Grant-in-Aid for Scientific Research (A) 18H03713 and 18H03714, and Grant-in-Aid for Young Scientists, 20K14524 and 20K15238), and the RIKEN Pioneering Projects. N.P. thanks CNRS Institute of Physics for support and RIKEN for a young scientist fellowship. X.M.T. was supported by Multidisciplinary Cooperative Research Program in CCS, University of Tsukuba. YK is grateful for the support of the NIFS Collaboration Research program (NIFS19KKGF043). P.I. is a member of the Allianz Program of the Helmholtz Association, contract no EMMI HA-216“Extremes of Density and Temperature: Cosmic Matter in the Laboratory”.