December 9, 2021
Kavli Institute for the Physics and Mathematics of the Universe (Kavli IPMU) 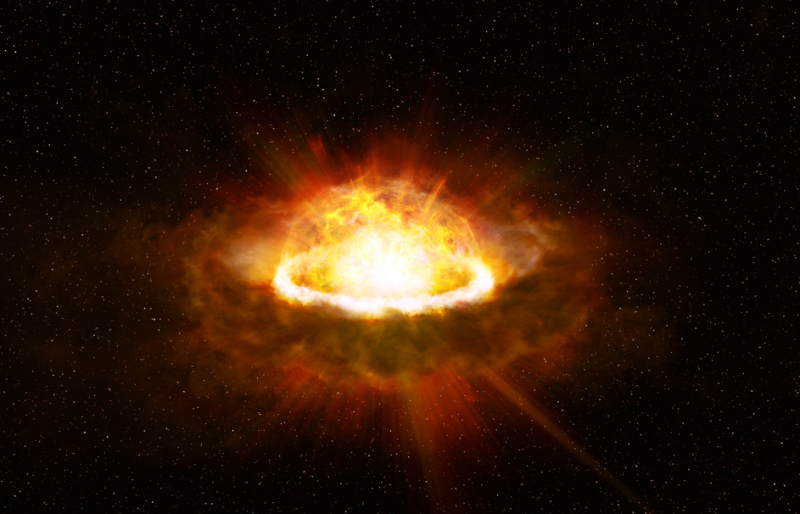 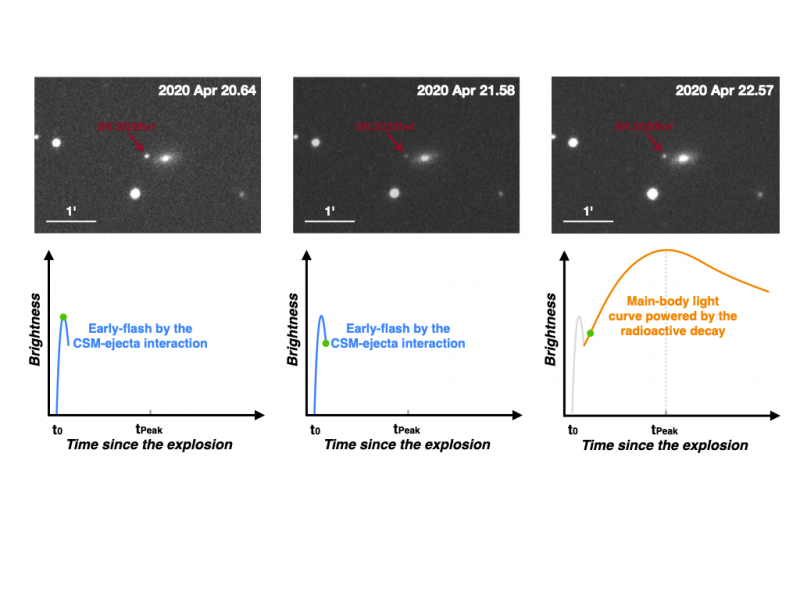 A team of astronomers have discovered the fastest optical flash of a Type Ia supernova, reports a study in the Astrophysical Journal Letters published on December 8.

Many stars end their lives through a spectacular explosion. Most massive stars will explode as a supernova. Though a white dwarf star is the remnant of an intermediate mass star like our Sun, it can explode if the star is part of a close binary star system, where two stars orbit around each other. This type of supernovae is classified as Type Ia supernovae. 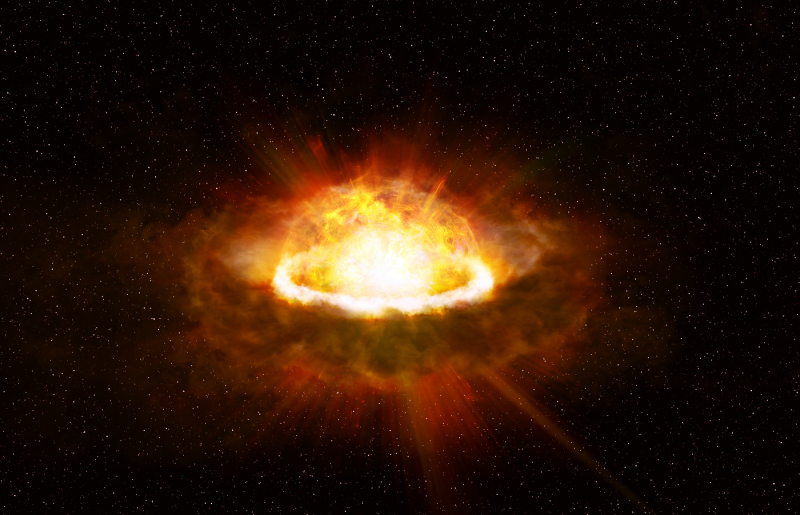 To figure out these long-standing issues, a team of astronomers, led by Kavli Institute for the Physics and Mathematics of the Universe (Kavli IPMU) Project Researcher Ji-an Jiang, attempted to catch Type Ia supernovae within one day of their explosions, called early-phase Type Ia supernovae, using new-generation wide-field survey facilities, including the Tomo-e Gozen camera, the first wide-field mosaic CMOS sensor imager in the world.

"Tomo-e202004aaelb was discovered with high brightness on April 21 in 2020. Surprisingly, its brightness showed significant variation in the next two days and then behaved like a normal early-phase Type Ia supernova. We have discovered several early-phase Type Ia supernovae that show interesting excess emission in the first few days of their explosions but have never seen such a fast and prominent early emission in optical wavelengths. Thanks to the high-cadence survey mode and the excellent performance of Tomo-e Gozen, we can perfectly catch this amazing feature for the first time. Such a prompt early flash should originate from a different origin compared to previously dis covered early-excess Type Ia supernovae,” said Jiang.

Computational simulations by Kyoto University Associate Professor Keiichi Maeda showed that the origin of the mysterious fast optical flash can be explained by the energy released from an interaction between supernova ejecta and a dense and confined circumstellar material (CSM) soon after the supernova explosion.

"We have not seen such a short and bright flash from Type Ia supernovae before, even with a recently increasing number of very early discoveries soon after the supernova explosion in the last few years, including those discovered by our team. The nature of the CSM must reflect the nature of the progenitor star, and thus this is a key to understanding what kind of a star explodes and how they do so. A question is what makes this supernova so special," said Maeda.

Through spectroscopic observations by the Seimei telescope of Kyoto University, the team found that the SN is a variant of brightest Type Ia supernovae.

"At the first look of the spectrum taken just after the initial flash, it stood out as something different from normal supernovae. We noticed that a brightest class of Type Ia supernovae might look like this one if they would be observed in such an early phase. Our classification was subsequently confirmed as the spectra evolve to look more and more similar to the previously found bright Type Ia supernovae," said Kyoto University Project Researcher Miho Kawabata.

The team’s result shows at least a fraction of Type Ia supernovae originate from a dense CSM environment, which provides a stringent constraint on the progenitor system of these spectacular phenomena in our universe. Given that Tomo-e202004aaelb (SN 2020hvf) is much brighter than typical Type Ia supernovae used as the distance indicator, the discovery will enable Jiang and his collaborators to test various theories which have been proposed for these peculiar overluminous Type Ia supernovae.

"Previously, we have constructed theoretical models of super-Chandrasekhar-mass rotating white dwarfs and their explosions. Such massive models can be consistent with the peak brightness of SN 2020hvf, but more theoretical work is necessary to explain the detailed observational properties. SN 2020hvf has provided a wonderful opportunity of collaboration between the theory and observations." said Kavli IPMU Senior Scientist Ken’ichi Nomoto.

Jiang's team will continue looking for the answer of the long-standing origin issue of Type Ia supernovae by carrying out transient surveys with telescopes all over the world.

"We have used Type Ia supernovae to measure the expansion of the universe, although their origins are not well understood. The early-phase photometry of Type Ia supernovae provides unique information to understand their origins, and hence, should contribute to more accurate measurements of the expansion of the universe in near future," said Kavli IPMU Senior Scientist and University of Tokyo Professor Mamoru Doi.

Details of this study were published in the Astrophysical Journal Letters on Dec 8, 2021.

Research contact
Ji-an Jiang
Project Researcher
Kavli Institute for the Physics and Mathematics of the Universe, The University of Tokyo
E-mail: jian.jiang_at_ipmu.jp
Please change * _at_ to @