June 23, 2017
Kavli Institute for the Physics and Mathematics of the Universe (Kavli IPMU) 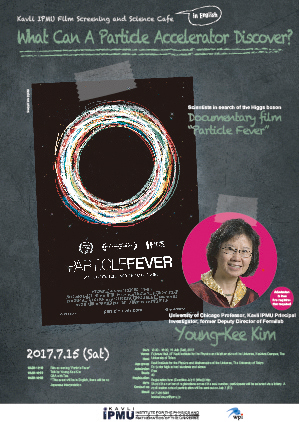 The Kavli IPMU at The University of Tokyo's Kashiwa Campus will host a film screening and science cafe on July 15 (Sat).

Following a screening of the award-winning documentary film Particle Fever, which follows the launch of the Large Hadron Collider and its effect on several researchers who are all anticipating the discovery of the Higgs boson, we will have a talk by Kavli IPMU Principal Investigator Young-Kee Kim about experiments using particle accelerators and the Higgs boson. Kim is the former deputy director of Fermilab in the United States, and over her long career in experimental physics she has worked with some of the biggest particle accelerators in the world, including the ATLAS experiment at the Large Hadron Collider.

This event will be in English.

* Will be held in English

Born in South Korea, Kim moved to the United States after receiving her Master's degree in Physics from Korea University. After receiving a PhD in Physics from the University of Rochester, Kim held academic positions at the University of California, Berkeley, before moving to the University of Chicago in 2003 where she is currently the Louis Block Distinguished Service Professor in Physics. From 2004 and 2006 she was the co-spokesperson for the CDF (Collider Detector at Fermilab) Collaboration, and from 2006 to 2013 she was the Deputy Director of Fermilab. In 2017 Kim became a Kavli IPMU Principal Investigator. Her research field is particle physics.