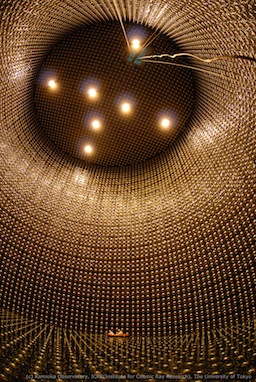 Super-Kamiokande (SK) measures the properties of neutrinos to help understand their role within ordinary matter and the origin of matter. Its revolutionary measurements of neutrino properties, in particular the discovery of neutrino oscillations, were recognized with the 2015 Nobel Prize in Physics. SK also explores the evolution of the universe by observing neutrinos coming from distant stars. Furthermore, it searches for decays of the proton, which has never been observed but is predicted to occur very rarely according to various Unification Theories.

EGADS (Evaluating Gadolinium's Action on Detector Systems) is a test facility for studying the effects of adding a chemical compound of gadolinium into Super-Kamiokande. This gadolinium salt will enhance the sensitivity for detecting (anti-)neutrinos from distant supernovae, an IPMU-led project originally known as GADZOOKS! (Gadolinium Antineutrino Detector Zealously Outperforming Old Kamiokande, Super!) and now referred to as SK-Gd. With the R&D successfully completed and SK currently being readied for gadolinium, EGADS has been repurposed into a dedicated, Gd-loaded supernova neutrino detector. Reflecting this new role, EGADS's acronym has also been changed to Employing Gadolinium to Autonomously Detect Supernovas.
(Last update: 2018/05/29)