March 24, 2016
Kavli Institute for the Physics and Mathematics of the Universe (Kavli IPMU) 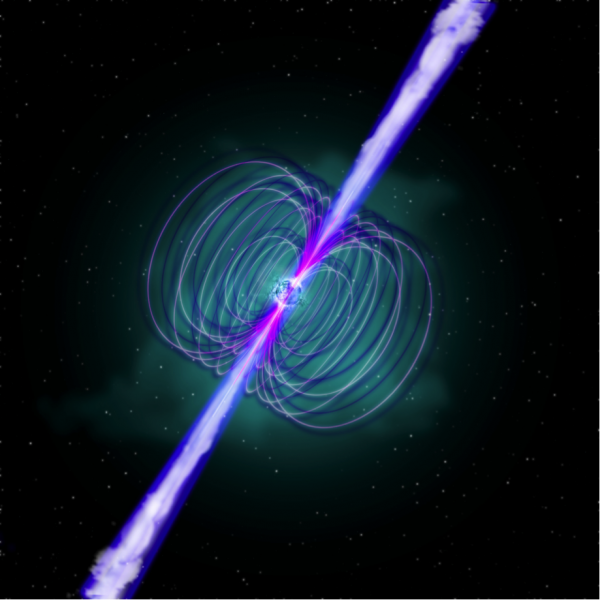 A group of researchers led by Melina Bersten, an Instituto de Astrofisica de La Plata Researcher and affiliate member of Kavli IPMU, and including Kavli IPMU Principal Investigator Ken'ichi Nomoto, tested a model that suggests that the energy to power the luminosity of two recently discovered SLSNe, SN 2011kl and ASASSN-15lh, is mainly due to the rotational energy lost by a newly born magnetar. They analyzed two recently discovered super-luminous supernovae: SN 2011kl and ASASSN-15lh.

“These supernovae can be found in very distant universe, thus possibly informing us the properties of the first stars of the universe,” said Nomoto.

Interestingly, both explosions were found to be extreme cases of SLSNe. First, SN 2011kl was discovered in 2011 and is the first supernovae to have an ultra long gamma-ray burst that lasted several hours, whereas typical long-duration gamma-ray bursts fade in a matter of minutes. The second, ASASSN-15lh, was discovered in 2015 and is possibly the most luminous and powerful explosion ever seen, more than 500 times brighter than normal supernovae. For more than a month its luminosity was 20 times brighter than the whole Milky Way galaxy.

The team performed numerical hydrodynamical calculations to explore the magnetar hypothesis, and found both SLSNe could be understood in the framework of magnetar-powered supernovae (see image 1). In particular, for ASASSN-15lh, they were able to find a magnetar source with physically allowed properties of magnetic field strength and rotation period. The solution avoided the prohibited realm of neutro-star spins that would cause the object to breakup due to centrifugal forces.

“These two extreme super-luminous supernovae put to the test our knowledge of stellar explosions,” said Bersten.

To confirm the team’s calculations, further observations would need to be carried out when the material ejected by the supernova is expected to become thin. The most powerful telescopes, including the Hubble Space Telescope, will be required for this purpose. If correct, these observations will allow scientists to probe the inner part of an exploding object, and provide new insight on its origin, and evolution of stars in the Universe.

The group’s paper was published in The Astrophysical Journal Letters in January. 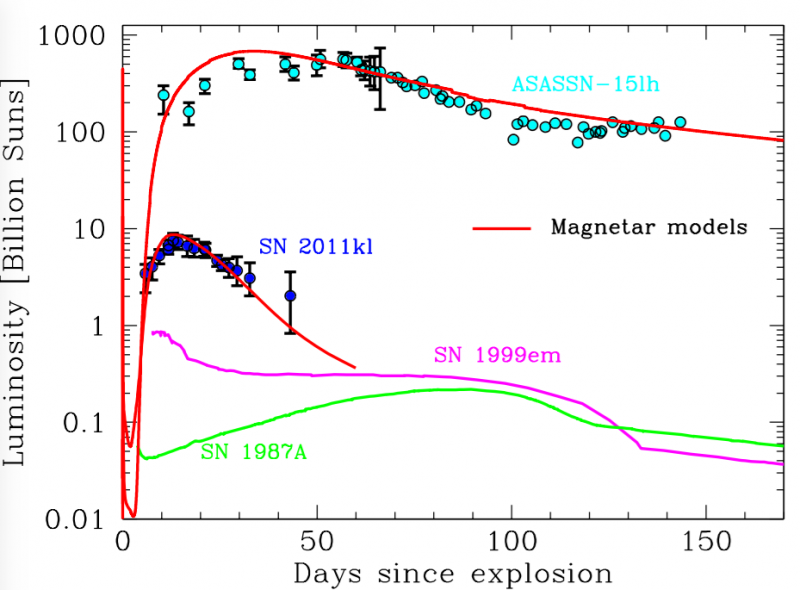 Research contact:
Ken'ichi Nomoto
Principal Investigator and Project Professor Kavli Institute for the Physics and Mathematics of the Universe
TEL: +81-04-7136-6567
E-mail: nomoto_at_astron.s.u-tokyo.ac.jp
*change _at_ to @

Useful links
All images can be downloaded from this page: http://web.ipmu.jp/press/201603-Magnetar