May 3, 2016
Kavli Institute for the Physics and Mathematics of the Universe (Kavli IPMU) 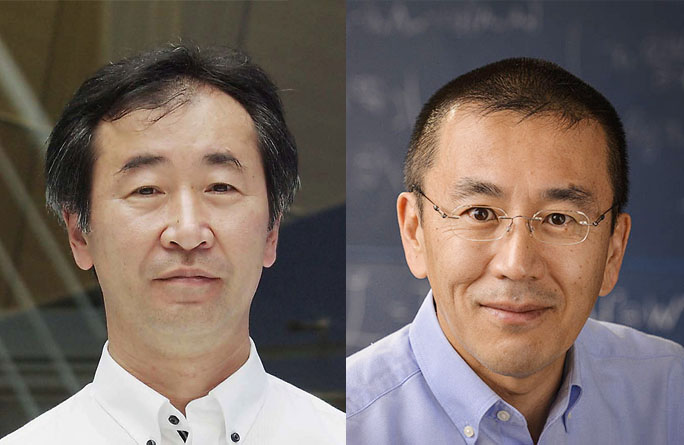 Two Principal Investigators of the Kavli Institute for the Physics and Mathematics of the Universe (Kavli IPMU), Takaaki Kajita (Director of Institute for Cosmic Ray Research) and Hirosi Ooguri (Fred Kavli Professor at California Institute of Technology), have been chosen to receive the 2016 Chunichi Cultural Award.

The award, now in its 69th year, celebrates individuals and groups with major contributions to the arts, the humanities, and natural and social sciences. Among the past recipients are six Nobel Laureates, including Makoto Kobayashi and Toshihide Maskawa (2008 Nobel Physics Laureates), Mathematician Shigefumi Mori (1990 Fields Medalist), and Anthony Ichiro Sanda, the WPI Program officer in charge of the Kavli IPMU. 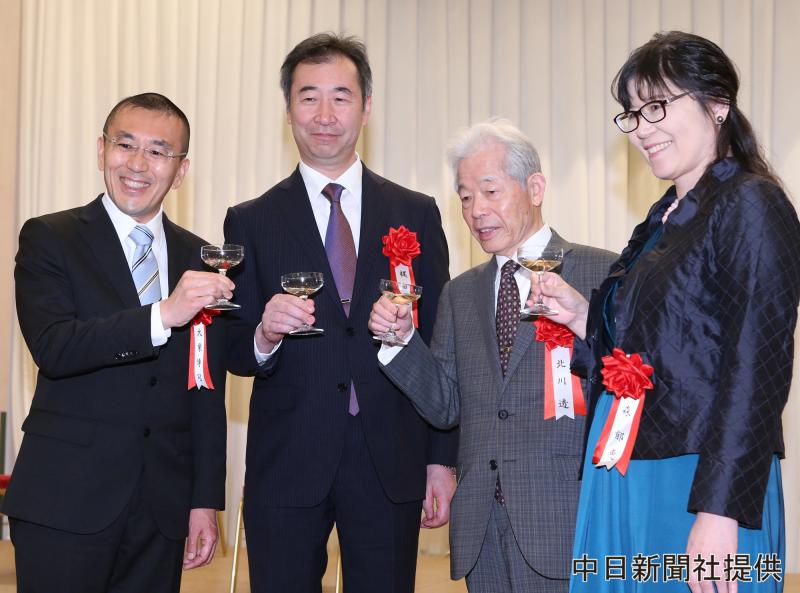 Kajita has been lauded for his role in the discovery of neutrino oscillations, which shows that elementary particle neutrinos have mass, through his work at the Kamiokande and Super-Kamiokande detectors 1000m underground in the Kamioka mine, Central Japan. Kajita was awarded the Nobel Prize in Physics last year for this discovery.

Ooguri has been lauded for his development of innovative methods of modern mathematics in high energy theory. His theoretical methods have advanced our understanding of quantum field theory and superstring theory and have helped solve some of the fundamental problems in physics.

The Chunichi Cultural Award was established in 1947 to commemorate the enaction of the Constitution of Japan, by Chunichi Shimbun, one of the major daily newspapers in Japan with over 4 million circulation. The award was announced on May 3, the Constitution Day, and the Award Ceremony is scheduled to be held on June 3 in Nagoya.

Kavli IPMU Director Hitoshi Murayama’s commented on the awards:
“The Kavli IPMU is incredibly proud of Professors Kajita and Ooguri. Not only does the Chunichi Cultural Award have a long and distinguished history, it is recognition of the significance of Kajita’s Nobel prize winning work with neutrino oscillations and discovery that neutrinos have mass, and Ooguri’s major contributions to the pursuit for the ultimate unified theory of elementary particles and the Universe by using modern mathematics. What is inspiring about both scientists is that they have not let these accomplishments signal the end of their research and that they are conducting their research works even more vigorously. Kajita is preparing to open new window in astronomy and to test gravitational theory by using gravitational waves, and Ooguri is applying his methods to condensed matter physics and is stimulating new developments in mathematics. You could say they are both going further in their research than ever before. I believe this will only lead to bigger accomplishments in physics and in the neighboring sciences, and look forward to seeing what they will achieve in future.”

About Takaaki Kajita
Takaaki Kajita is The University of Tokyo Honorary Professor Emeritus, and also holds positions at the University of Tokyo as Director of the Institute for Cosmic Ray Research (ICRR), and a Principal Investigator at the Kavli Institute for the Physics and Mathematics of the Universe. Kajita received his Ph.D. from the University of Tokyo School of Science in 1986, and has been researching neutrinos at the Kamiokande and Super-Kamiokande detectors at the Kamioka Underground Observatory in central Japan. He became a principal investigator at the Kavli IPMU in 2007. In 2015 he shared the Nobel Prize in Physics for his role in discovering atmospheric neutrino oscillations.