Hitoshi Murayama named one of the 100 influencers in the world

Hitoshi Murayama named one of the 100 influencers in the world

May 31, 2017
Kavli Institute for the Physics and Mathematics of the Universe (Kavli IPMU) 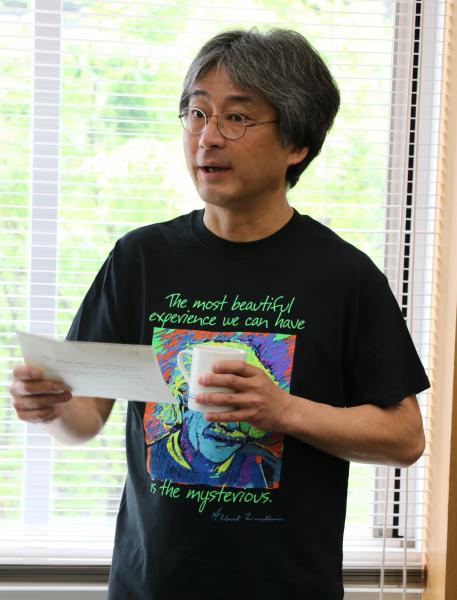 Hitoshi Murayama has been named a Genius Contributor for a project celebrating the 100th anniversary of the publication of Einstein's General Theory of Relativity, reports the Einstein Legacy Project on May 31.

The Kavli Institute for the Physics and Mathematics of the Universe director's vision will be one of 100 to be included in the upcoming book Genius: 100 Visions of the Future. The book will feature not only physicists, but other significant influencers in the world including pharmacists, chemists, economists, literature experts and artists. Those already on the list include Kyoto University professor and Nobel Laureate Shinya Yamanaka, Microsoft Co-founder Paul Allen, and Nigerian writer Chimamanda Adichie. The visions will be compiled into the world's first 3D-printed book featuring Einstein's face, designed by the world famous designer, Israel –born Ron Arad.

The Einstein Legacy Project will host a Dinner of the Century event in Montreal, Canada, on September 9 and 10, where the book will be unveiled.

"It is an incredible honor to be selected as one of the 100 visionaries with major influence from a wide range of fields around the world for the publication that commemorates the legacy of Albert Einstein, the pinnacle of physics in its entire history. I’m so pleased! I need to think hard and long about my own vision of the future of the society in 100 years, focusing on the place for humans in the era of AI and robotics based on cross-pollination of science, humanities, and arts."

Genius：100 Visions of the Future
http://www.alberteinsteinfoundation.com/100-visions-of-the-future