December 7, 2017
Kavli Institute for the Physics and Mathematics of the Universe (Kavli IPMU) 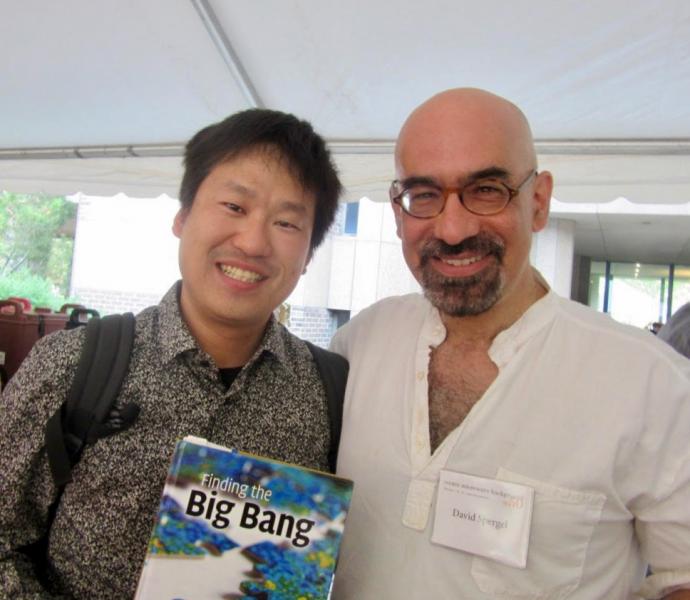 For their work in developing detailed maps of the early universe that has greatly improved our knowledge of the evolution of the cosmos and the fluctuations that seeded the formation of galaxies, Kavli Institute for the Physics and Mathematics of the Universe (Kavli IPMU) Principal Investigators David Spergel and Eiichiro Komatsu have been awarded the 2018 Breakthrough Prize in Fundamental Physics, announced the Breakthrough Foundation on December 3.

Spergel, also the Charles Young Professor of Astronomy at Princeton University and Founding Director of the Center for Computational Astrophysics at the Flatiron Institute, shares this year's prize with his colleagues Lyman Page, Jr. and Norman Jarosik from Princeton University, Chuck L. Bennett at Johns Hopkins University, Gary Hinshaw at the University of British Columbia, and the remaining 22 members of the Wilkinson Microwave Anisotropy Probe (WMAP) science team, including Eiichiro Komatsu.

The Breakthrough Prize was set up in 2012 by Russian entrepreneur Yuri Milner. They consist of three major prizes: the Breakthrough Prizes in fundamental physics, life sciences, and mathematics, that are presented during an award ceremony at NASA's Ames Research Center.

“I was pleased and honored that the WMAP team received the Breakthrough Prize. It was exciting to meet so many stars and leading figures of the tech world. I hope that events like this will help inspire the next generation to tackle the big problems in cosmology,” says Spergel.

"I feel honored and humbled to be recognized among the recipients of this prize. I am deeply thankful to the members of the WMAP science team, especially Prof. David Spergel who was my PhD advisor at Princeton, for giving me the opportunity to make my dream come true. I left Japan in 1999 to do research on the cosmic microwave background at Princeton, and it has changed my life completely. I am still amazed by what we have achieved together with the WMAP," says Komatsu, who is also Director of the Max Planck Institute for Astrophysics.

Previous Kavli IPMU researchers who have received the Breakthrough Prize include Takaaki Kajita and Yoichiro Suzuki, who received the prize on behalf of the Super-Kamiokande project along with the KamLAND, K2K and T2K, and SNOLAB projects. Kavli IPMU Professor Yuji Tachikawa also received the 2016 Fundamental Physics New Horizons Prize.