May 31, 2018
Kavli Institute for the Physics and Mathematics of the Universe (Kavli IPMU)
The Kavli Foundation 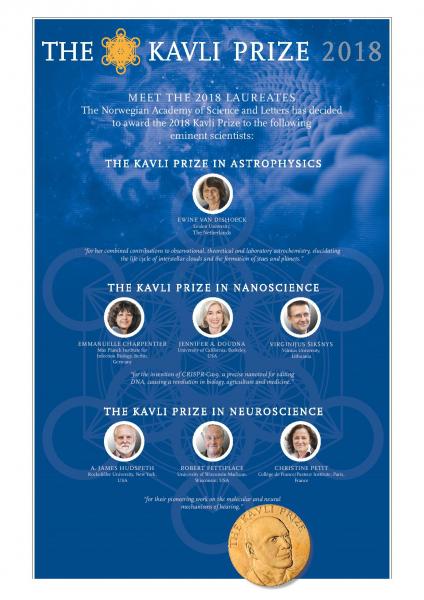 May 31, 2018 - Oslo - The Norwegian Academy of Science and Letters today announced the winners of the 2018 Kavli Prizes. Given in the fields of astrophysics, nanoscience and neuroscience, this year’s prizes honor scientists who revealed how molecules in space fuel the life cycle of stars and planets, developed a tool to precisely edit DNA, and unlocked the neuroscience underlying human hearing.
This year’s winners are:
• Kavli Prize in Astrophysics: Ewine van Dishoeck (the Netherlands)
• Kavli Prize in Nanoscience: Emmanuelle Charpentier (France), Jennifer A. Doudna (USA), and Virginijus Šikšnys (Lithuania)
• Kavli Prize in Neuroscience: A. James Hudspeth (USA), Robert Fettiplace (UK), and Christine Petit (France)
“These Laureates represent truly pioneering science, the kind of science which will benefit humanity in a profound way. They will inspire both current and future generations to continue searching for answers to some of the most difficult questions of our time. Through their hard work, dedication and innovation, they have strengthened our understanding of existence,” says Ole M. Sejersted, President of the Norwegian Academy of Science and Letters.
The Prize consists of a gold medal and a cash prize of USD $1 million for each field. The Norwegian Academy of Science and Letters selected the Laureates, based on nominations by committees whose members are recommended by six of the world’s most renowned science societies and academies. The announcement of the 2018 Laureates was made in Oslo and streamed live to the World Science Festival in New York City.

The Kavli Prize in Astrophysics

The Kavli Prize in Astrophysics is given to Ewine van Dishoeck for her seminal work on revealing the chemical and physical processes in interstellar clouds, where stars and planets form. Her work has contributed to a breakthrough of astrochemistry, demonstrating how molecules form and evolve during the transformation of a cloud into stellar systems like our own.

Through observational studies using telescopes on Earth and in space, van Dishoeck unveiled the "water trail,” measuring water vapor from dense clouds to young stars. This helps us understand the formation mechanisms of molecules crucial for life as we know it. She also discovered important structures within the rings of dust and gas surrounding young stars, the birthplace of planets and comets.

Van Dishoeck is professor of molecular astrophysics at the University of Leiden and has played a leading role in advancing the field of astrophysics. This includes serving on the board of the internationally-supported Atacama Large Millimeter/submillimeter Array (ALMA) in Chile—a collection of 66 dishes that can be connected to function as one telescope with a diameter of 10 km (6.2 miles). With this exceptional instrument, van Dishoeck and colleagues have studied the formation of solar-type stellar systems within our galaxy.

"Professor Van Dishoeck's research on the chemistry of the universe has transformed virtually every aspect of the subject. She has advanced a subject that was once regarded as a small activity on the fringes of mainstream astrophysics, and brought it to the forefront of astronomy as a whole,” says Robert Kennicutt, member of the astrophysics prize committee.

The Kavli Prize in Nanoscience

The Kavli Prize in Nanoscience is awarded to three scientists who invented CRISPR-Cas9, the revolutionary nanotool for editing DNA, and opening a new chapter in biology, agriculture and medicine. The USD $1 million prize will be shared by Emmanuelle Charpentier of the Max Planck Society, Jennifer A. Doudna of the University of California, Berkeley, and Virginijus Šikšnys of Vilnius University.

“CRISPR-Cas9 is a breakthrough nanotool that will considerably enhance our understanding of genetic mechanisms. This great invention confers to society enormous capabilities for positive innovations,” says Arne Brataas, head of the nanoscience prize committee.

With their teams, Charpentier and Doudna, and independently Šikšnys invented a new tool that allows researchers to identify specific sequences in the genome and edit them, thereby changing the instruction manual of living things. Their breakthrough was found in combining CRISPR (“Clustered Regularly Interspaced Short Palindromic Repeats”), an element of the immune system of bacteria, with the Cas9 protein to precisely edit DNA.

The pioneering work has unleashed global interest among scientists and the public in a field of research with enormous potential to address disease-causing mutations in humans and improve agriculture. It has also sparked a conversation around the ethical challenges that must be addressed when altering genes.

The Kavli Prize in Neuroscience

The Kavli Prize in Neuroscience is shared between A. James Hudspeth, of the Rockefeller University, Robert Fettiplace, of the University of Wisconsin, Madison, and Christine Petit, of Collège de France/Pasteur Institute, for their scientific discoveries of the molecular and neural mechanisms of hearing. The Laureates used complementary approaches to unravel the mechanisms by which hair cells in the inner ear transform sound into electrical signals that can be deciphered by the brain.

"They have provided fundamental new insights into how our inner ear transforms sound into electrical signals - the basis of hearing - and have unveiled genetic and molecular mechanisms underlying hearing loss," says Ole Petter Ottersen, head of the neuroscience prize committee. "Their work serves as a sterling example of how concerted efforts across disciplines and technologies can revolutionize our understanding of complex neurobiological processes."

Hudspeth's research has provided much of the framework for our understanding of how sound is converted into neural signals through hair cells and their ion channels. Fettiplace showed that each hair cell in the cochlea of the inner ear is sensitive to a specific range of sound frequencies and discovered the mechanistic basis of this. By exploring the genetics of hereditary deafness, Christine Petit has furthered our understanding of hair cell biology and informed deafness diagnosis and counseling. Combined, these Laureates' work has unraveled the sense of hearing.

About the Kavli Prizes

The Kavli Prize is a partnership between the Norwegian Academy of Science and Letters, the Kavli Foundation (USA) and the Norwegian Ministry of Education and Research. First awarded in 2008, the Kavli Prize has honored 47 scientists from 11 countries – France, Germany, Japan, Lithuania, The Netherlands, Norway, Russia, Sweden, Switzerland, the United Kingdom and the United States.
The Kavli Prize recognizes scientists for pioneering advances in our understanding of existence at its biggest, smallest, and most complex scales. Presented every two years in the fields of astrophysics, nanoscience and neuroscience, each of three prizes consists of USD $1 million and a gold medal. Laureates are nominated by committees whose members are recommended by The Chinese Academy of Sciences, The French Academy of Sciences, The Max Planck Society (Germany), The National Academy of Sciences (US), The Royal Society (UK) and the Norwegian Academy of Science and Letters. Winners receive gold medals in Oslo, Norway, in a ceremony presided over by His Majesty King Harald. A banquet takes place at Oslo’s City Hall, the venue of the Nobel Peace Prize ceremony.
The 2018 Kavli Prizes will be awarded on Tuesday, September 4 in Oslo, Norway.
For more detailed information on each of the prizes, the 2018 laureates and their work, the Kavli Prize and all the events, please see the Kavli Prize website: www.kavliprize.org