April 27, 2018
Kavli Institute for the Physics and Mathematics of the Universe (Kavli IPMU)

The Kavli IPMU invites you to gain insights into your understanding of the "World" and the "Universe" in an upcoming public lecture on June 10 at the Miraikan featuring Yasunori Nomura, Professor at the University of California, Berkeley, Principal Investigator at the Kavli Institute for the Physics of the Universe, and Markus Gabriel, Professor at the University of Bonn. The two speakers will talk about the latest developments in the science of the "Universe", and philosophy of the "World", followed by a discussion. 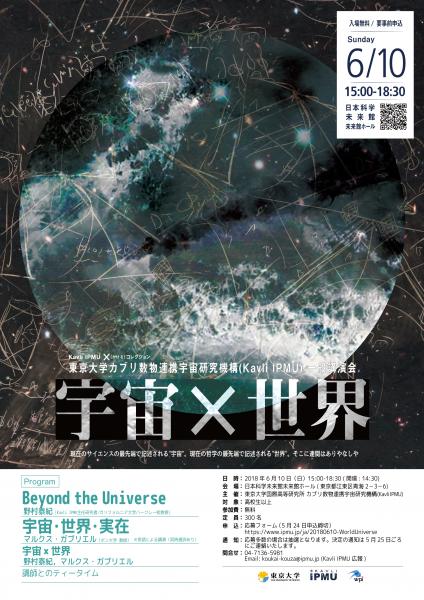 Speaker: Yasunori Nomura (Professor, University of California, Berkeley, and Principal Investigator, Kavli Institute for the Physics and Mathematics of the Universe)

Where did the Universe come from, what is its fate? What is outside the Universe? Recent advances in theoretical physics such as string theory have begun to reveal some surprising possibilities. In this lecture, Nomura will introduce a world predicted by the latest theories in physics: a world in which our Universe is not the entire Universe but one of infinitely many universes within the "multiverse." He will also discuss curious properties of spacetime suggested by the multiverse picture as well as physics of black holes.

About the speaker： Born in Kanagawa prefecture in 1974. Nomura is currently a Professor at the University of California, Berkeley, and Director of the Berkeley Center for Theoretical Physics. He is also a Principal Investigator at the Kavli Institute for the Physics and Mathematics of the Universe, University of Tokyo, and Senior Faculty Scientist at Lawrence Berkeley National Laboratory. His research field is particle physics and cosmology. He received his PhD from the University of Tokyo, and is also the author of popular science book "Introduction to the Multiverse: Why do we exist in this Universe"

* This lecture will be Japanese with simultaneous interpretation.

In this lecture, Gabriel will argue that the universe - in the sense of the domain paradigmatically studied by physics - is not all there is. Even if turns out that there are many universes somewhat similar to ours, they do not exhaust reality. In this context, it seems to make sense to postulate an ever bigger domain: the maximal domain of absolutely everything. Philosophers call this "the world". Gabriel will argue that the world does not exist while both the universe and infinitely many non-physical objects really exist. This has profound consequences for our contemporary understanding of reality.

About the speaker：Born in Germany in 1980. After receiving his PhD from Heidelberg University, Gabriel joined the University of Bonn in 2009, and is currently Professor of Epistemology, Modern, and Contemporary Philosophy, and also serves as Director of the university's International Centre for Philosophy. Since 2017, he has served as one of founding directors at Center for Science and Thought. His popular book "Warum es die Welt nicht gibt" was translated into Japanese in January this year.

* This lecture will be English with simultaneous interpretation.

A series of events where Kavli IPMU researchers have exchanged discussions with experts from different disciplines. Click here for a full list of past events.