September 21, 2018
Kavli Institute for the Physics and Mathematics of the Universe (Kavli IPMU) 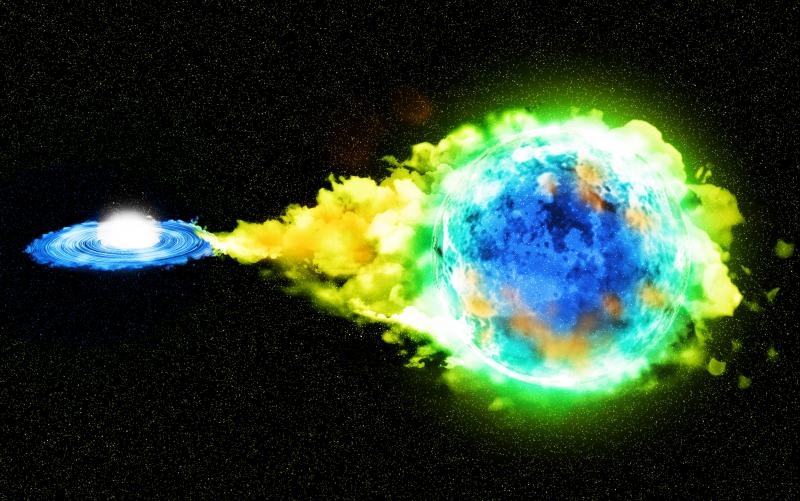 Researchers have found white dwarf stars with masses close to the maximum stable mass (called the Chandrasekhar mass) are likely to produce large amounts of manganese, iron, and nickel after it orbits another star and explodes as Type Ia supernovae (figure 1).

A Type Ia supernova is a thermonuclear explosion (figure 2) of a carbon-oxygen white dwarf star with a companion star orbiting one another, also known as a binary system. In the Universe, Type Ia supernovae are the main production sites for iron-peak elements, including manganese, iron, and nickel, and some intermediate mass elements including silicon and sulfur (figure 3).

However, researchers today cannot agree on what kind of binary systems triggers a white dwarf to explode. Moreover, recent extensive observations have revealed a large diversity of nucleosynthesis products, the creation of new atomic nuclei from the existing nuclei in the star by nuclear fusion, of Type Ia supernovae and their remnants, in particular, the amount of manganese, stable nickel, and radioactive isotopes of 56-nickel and 57-nickel (figure 4). 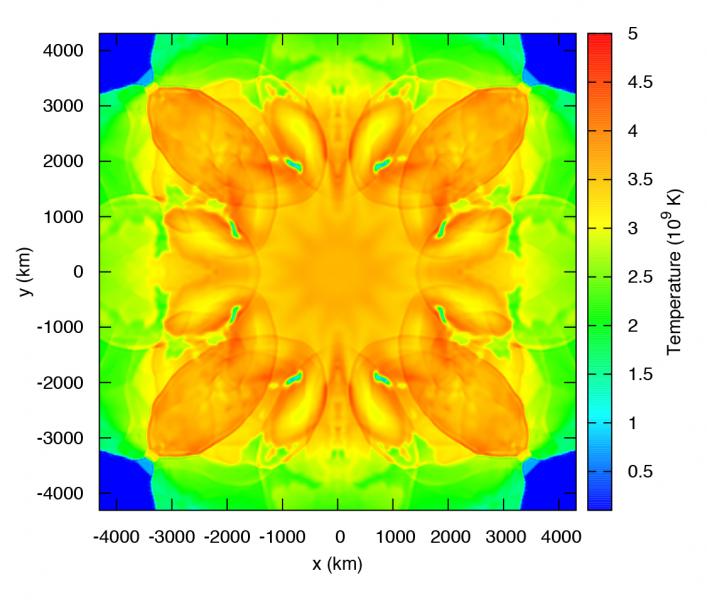 To uncover the origin of such diversities, Kavli Institute for the Physics and Mathematics of the Universe (Kavli IPMU) Project Researcher Shing-Chi Leung and Senior Scientist Ken’ichi Nomoto carried out simulations using the most accurate scheme to date for multi-dimensional hydrodynamics of Type Ia supernova models. They examined how chemical abundance patterns and the creation of new atomic nuclei from existing nucleons depend on white dwarf properties and their progenitors.

“The most important and unique part of this study is that this is so far the largest parameter survey in the parameter space for the Type Ia supernova yield using the Chandrasekhar mass white dwarf,” said Leung.

A particularly interesting case was the supernova remnant 3C 397 (figure 5). 3C 397 is located in the Galaxy about 5.5 kpc from the center on the galactic disk. Its abundance ratios of stable manganese/iron and nickel/iron were found to be two and four times that of the Sun respectively. Leung and Nomoto found the abundance ratios among manganese, iron and nickel are sensitive to white dwarf mass and metallicity (how abundant it is in elements heavier than hydrogen and helium). The measured values of 3C 397 can be explained if the white dwarf has a mass as high as the Chandrasekhar mass and high metallicity (figure 6). 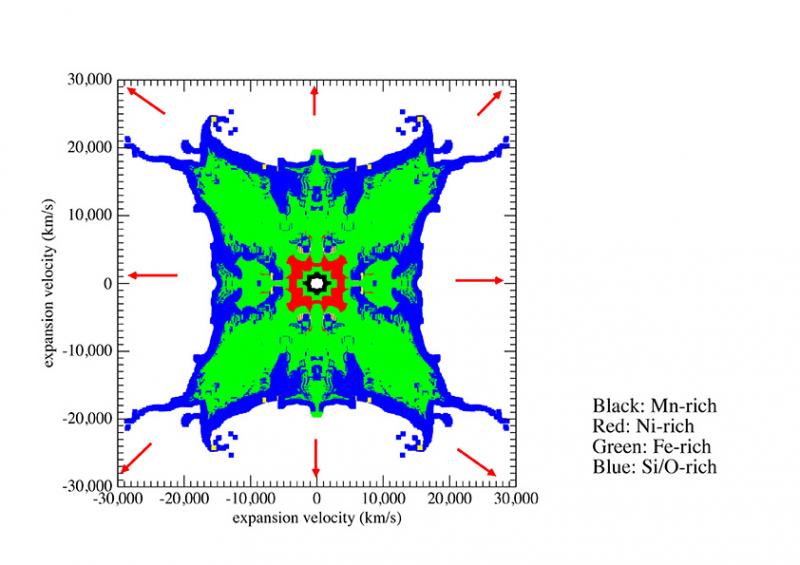 low mass (a sub-Chandrasekhar mass). Moreover, the white dwarf should have a metallicity higher than the Sun’s metallicity, in contrast to the neighboring stars which have a typically lower metallicity.

The results will be useful in future studies of chemical evolution of galaxies for a wide range of metallicities, and encourage researchers to include super-solar metallicity models as a complete set of stellar models.

Leung says the next step of this study would involve further testing their model with more observational data, and to extend it to another subclass of Type Ia supernovae.

These results were published in the July 10 issue of The Astrophysical Journal. 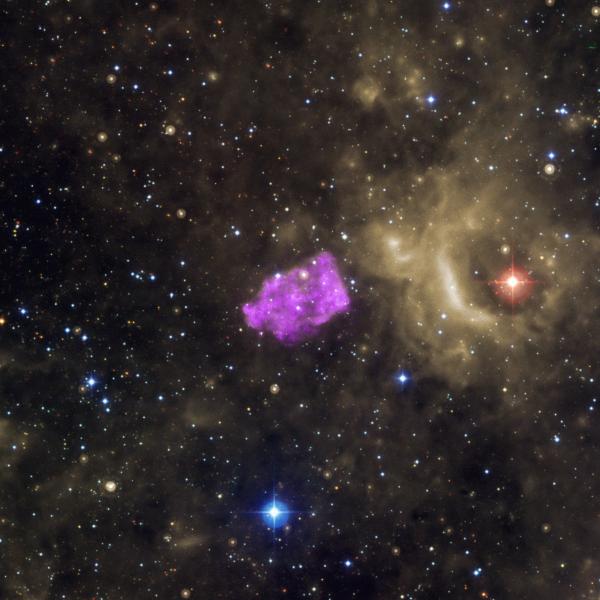 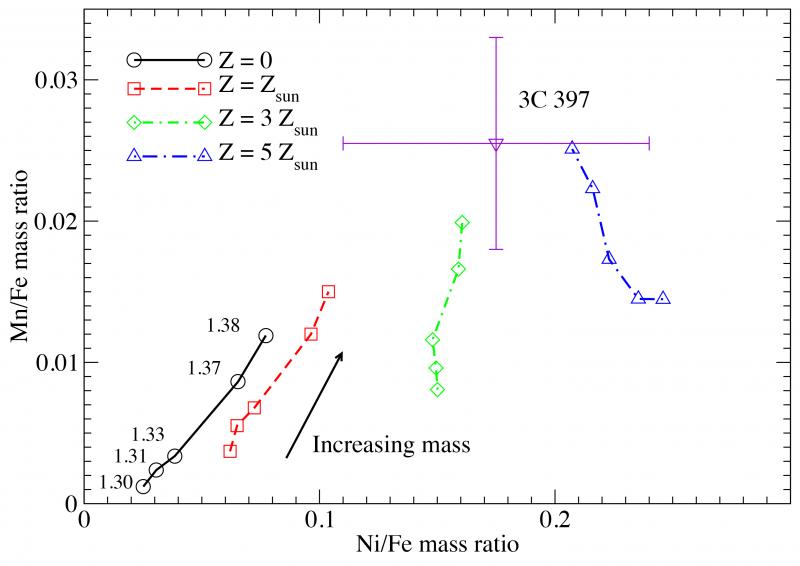 Research contact
Shing Chi Leung
Project Researcher
Kavli Institute for the Physics and Mathematics of the Universe
University of Tokyo
E-mail: shingchi.leung_at_ipmu.jp
* Change _at_ to @

Ken'ichi Nomoto
Senior Scientist
Kavli Institute for the Physics and Mathematics of the Universe
University of Tokyo
TEL: +81-04-7136-6567
E-mail: nomoto_at_astron.s.u-tokyo.ac.jp
* Change _at_ to @