January 15, 2019
Kavli Institute for the Physics and Mathematics of the Universe (Kavli IPMU) 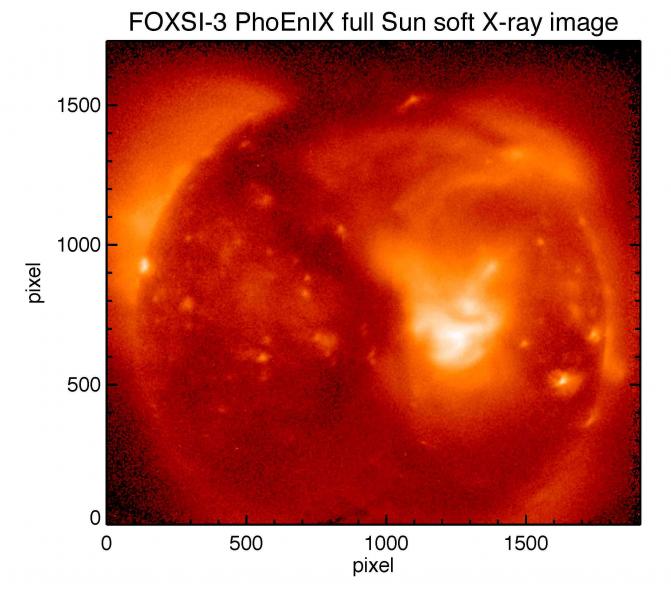 While observation rocket FOXSI-3 was flying up to 300 kilometers above Earth in September 2018, researchers in the US-Japan collaboration found FOXSI-3 had successfully taken the most accurate data of x-ray photons surrounding the Sun to date.

Researchers have been studying solar corona, the plasma surrounding the Sun and other stars, since the 1980s. This plasma can reach temperatures of just under 1 million degrees celsius, creating a dynamic area where various energy releases occur. Researchers are interested in studying solar corona in more detail, and finding how they impact the Earth's environment.

Early studies involved measuring x-rays from balloons, but because x-rays are absorbed by the Earth's atmosphere, the best studies are done in space.

Kavli Institute for the Physics and Mathematics of the Universe Principal Investigator Tadayuki Takahashi, Master's student Kento Furukawa, and researchers from the National Astronomical Observatory of Japan, the University of Tokyo, Nagoya University, Institute of Space and Astronautical Science / Japan Aerospace Exploration Agency (ISAS/JAXA), and Tokyo University of Science had developed a high-speed soft x-ray camera, which was installed on FOXSI-3 (Focusing Optics X-ray Solar Imager).

Initial data analysis showed the camera was successful, and has produced new data of solar corona. Researchers will now analyze all the data.