Researchers pin down a quantum mechanical anomaly in electromagnetism

Researchers pin down a quantum mechanical anomaly in electromagnetism

April 6, 2020
Kavli Institute for the Physics and Mathematics of the Universe (Kavli IPMU) 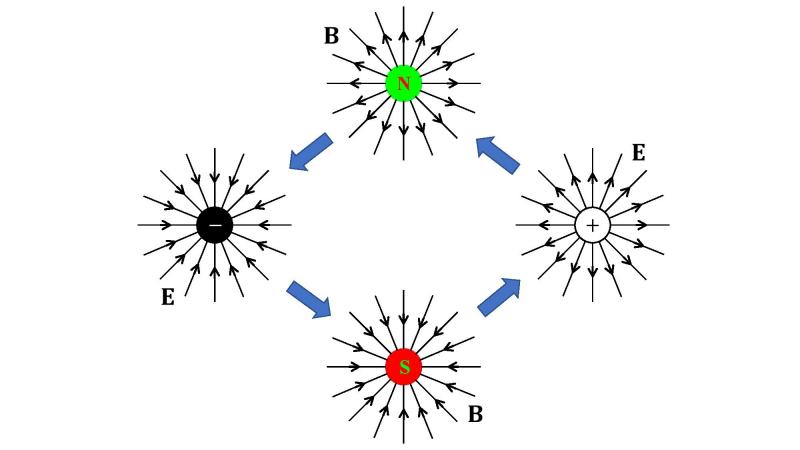 A team of string theorists and a condensed-matter theorist have found a quantum mechanical anomaly in the duality between the electric field and the magnetic field. This anomaly plays a role in removing a possible inconsistency in string theory.

Almost 150 years ago, physicist James Maxwell formulated a set of equations, now known as Maxwell’s equations, which describes electromagnetism. These equations underlie radio technologies used today, and also showed that light is an oscillation of electric and magnetic fields. The equations also showed that electricity and magnetism, which look so different in everyday life, are actually two faces of one unified entity. In particular, Maxwell’s equations remain the same, even when the role of the electric field and the magnetic field is reversed. This shows the fundamental equality, or duality, of electricity and magnetism (figure).

This duality leads to the existence of magnetic monopoles, hypothetical particles carrying single magnetic poles, which in turn implies that all electric charges in the universe are integer multiples of the minimal charge, as originally found by physicist Paul Dirac in 1931. This is called the Dirac quantization of charges.

A trio of researchers, including Kavli Institute for the Physics and Mathematics of the Universe (Kavli IPMU) Project Researcher Chang-Tse Hsieh, Professor Yuji Tachikawa, and Tohoku University Associate Professor Kazuya Yonekura (also a former Kavli IPMU researcher), were interested in studying what would happen to electromagnetic duality quantum mechanically.

Developments in the last several years by condensed-matter physics had indicated that the anomaly of a d-dimensional system would be best studied as appearing on the boundary of a (d+1)-dimensional symmetry-protected topological phase of matter. As a result, the team found the Maxwell theory anomaly was 56 times that of a fermion particle, computed previously by Hsieh.

A partial resolution of the inconsistency had already been found by Tachikawa and Yonekura in a previous study, where the anomaly of fermions cancelled against the violation of Dirac quantization conditions, but there were still cases where the inconsistency remained.

In their latest study, the team showed that the consistency in a number of the remaining cases can be achieved by incorporating the anomaly of the Maxwell theory. This means that the subtle and unexpected mechanism has saved string theory. Also, independent of its relevance to string theory, this works shows that physicists still have a lot to uncover regarding the 150-year-old theory by Maxwell.

Their study was published in Physical Review Letters on October 14, 2019, where it was selected as an Editor’s Suggestion.

Research contact
Yuji Tachikawa
Professor
Kavli Institute for the Physics and Mathematics of the Universe
University of Tokyo
E-mail: yuji.tachikawa_at_ipmu.jp
* Change _at_ to @