June 25, 2020
Kavli Institute for the Physics and Mathematics of the Universe (Kavli IPMU)

Through simulations of a dying star, a team of theoretical physics researchers have found the evolutionary origin and the maximum mass of black holes which are discovered by the detection of gravitational waves as shown in Figure 1. 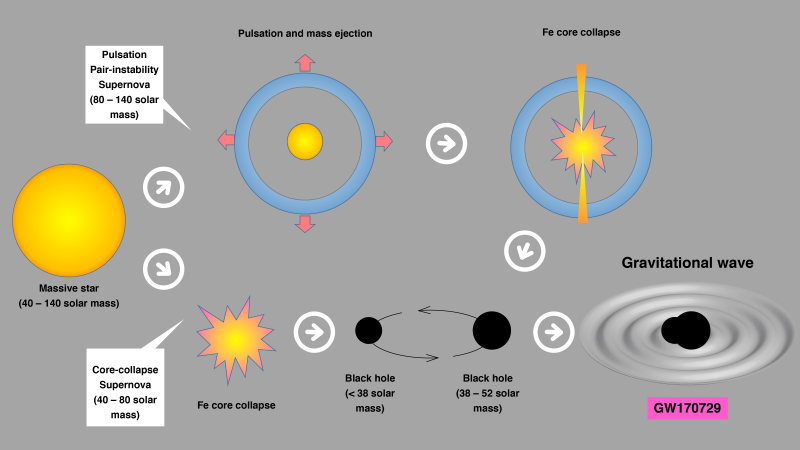 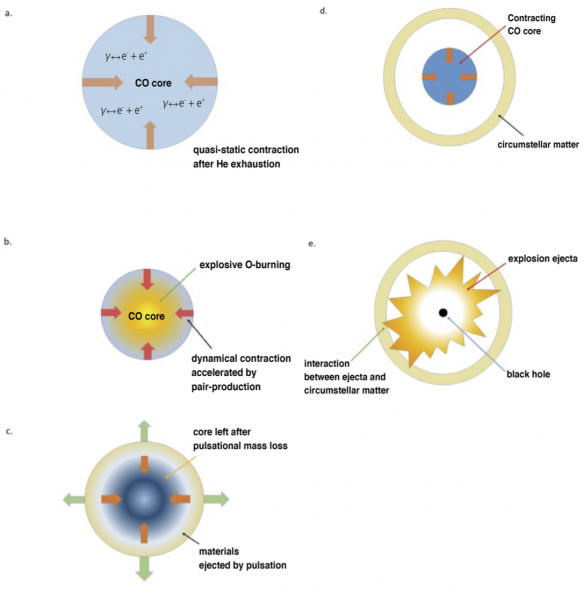 To answer this question, a research team at the Kavli Institute for the Physics and Mathematics of the Universe (Kavli IPMU) consisting of Project Researcher at the time Shing-Chi Leung (currently at the California Institute of Technology), Senior Scientist Ken’ichi Nomoto, and Visiting Senior Scientist Sergei Blinnikov (professor at the Institute for Theoretical and Experimental Physics in Mosow) have investigated the final stage of the evolution of very massive stars, in particular 80 to 130 solar mass stars in close binary systems. Their finding are shown in Illustrations (a - e) and Figures (1 - 4).

In close binary systems, initially 80 to 130 solar mass stars lose their hydrogen-rich envelope and become helium stars of 40 to 65 solar mass. When the initially 80 to 130 solar mass stars form oxygen-rich cores, the stars undergo dynamical pulsation (Illustrations a - b and Figure 2), because the temperature in the stellar interior becomes high enough for photons to be converted into electron-positron pairs. Such “pair-creation” makes the core unstable and accelerates contraction to collapse (Illustration b).

In the over-compressed star, oxygen burns explosively. This triggers a bounce of collapse and then rapid expansion of the star. A part of the stellar outer layer is ejected, while the inner part cools down and collapses again (Illustration c). The pulsation (collapse and expansion) repeats until oxygen is exhausted (Illustration d). This process is called “pulsational pair-instability”(PPI). The star forms an iron core and finally collapses into a black hole, which would trigger the supernova explosion (Illustration e), being called PPI-supernova (PPISN).

By calculating several such pulsations and associated mass ejection until the star collapses to form a black hole, the team found that the maximum mass of the black hole formed from pulsational pair-instability supernova is 52 solar mass (Figure 3).

The above results predict that there exists a “mass-gap” in the black hole mass between 52 and about 150 solar mass. The results mean that the 50 solar mass black hole in GW170729 is most likely a remnant of a pulsational pair-instability supernova as shown in Figures 3 and 4.

The result also predicts that a massive circumstellar medium is formed by the pulsational mass loss, so that the supernova explosion associated with the black hole formation will induce collision of the ejected material with the circumstellar matter to become a super-luminous supernovae. Future gravitational wave signals will provide a base upon which their theoretical prediction will be tested. 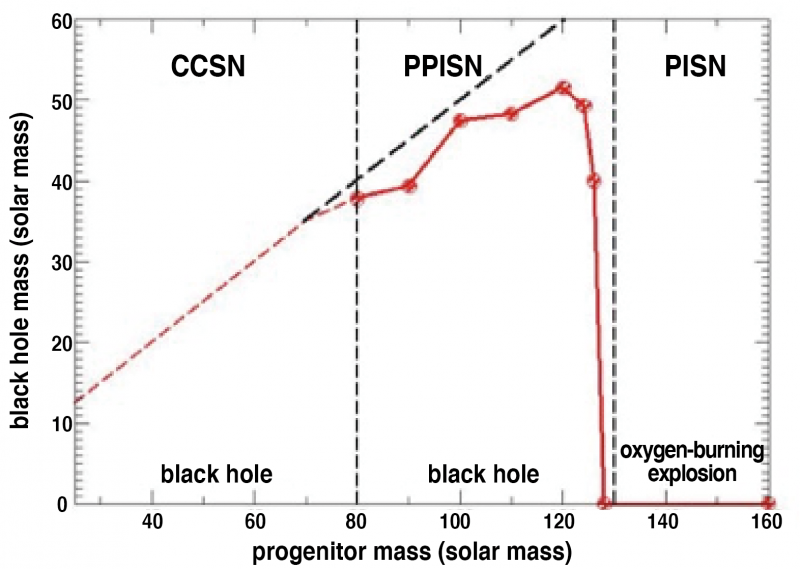 Images
All images can be downloaded from here

Kavli Institute for the Physics and Mathematics for the Universe, 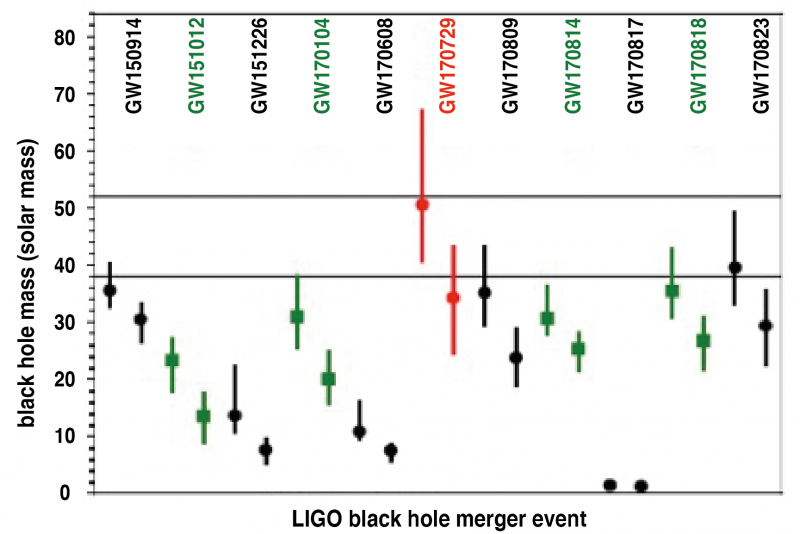