November 10, 2020
Kavli Institute for the Physics and Mathematics of the Universe (Kavli IPMU)

How hot is the Universe today? How hot was it before? A new study by an international team of researchers, including members of the Kavli Institute for the Physics and Mathematics of the Universe (Kavli IPMU), suggests that the mean temperature of gas in large structures of the Universe has increased about 3 times in the last 8 billion years, to reach about two million Kelvin today.

The large-scale structure of the Universe refers to the global pattern of how galaxies and galaxy clusters are distributed in space. This cosmic net formed from tiny irregularities in the matter distribution in the early Universe, which were amplified through gravitational attraction. “As the Universe evolves, gravity pulls dark matter and gas in space together into galaxies and clusters of galaxies,” said Yi-Kuan Chiang, the lead author of the study, and a research fellow at the Ohio State University Center for Cosmology and AstroParticle Physics. “The drag is violent—so violent that more and more gas is shocked and heated up.”

This heated gas can then be used to measure the mean temperature of the Universe over cosmic time. In particular, the researchers used the so-called “Sunyaev-Zeldovich” effect, named after Rashid Sunyaev, director emeritus at the Max Planck Institute for Astrophysics, and Soviet-era physicist Yakov Zeldovich, who first predicted this phenomenon theoretically. This effect arises when low-energy photons of the cosmic microwave background radiation are scattered by hot electrons in the large-scale structure of the Universe. The scattering transfers energy from electrons to photons, making the hot electron gas visible. The intensity of the Sunyaev-Zeldovich effect is proportional to the thermal pressure of the gas, which, in turn, is proportional to the temperature of electrons. 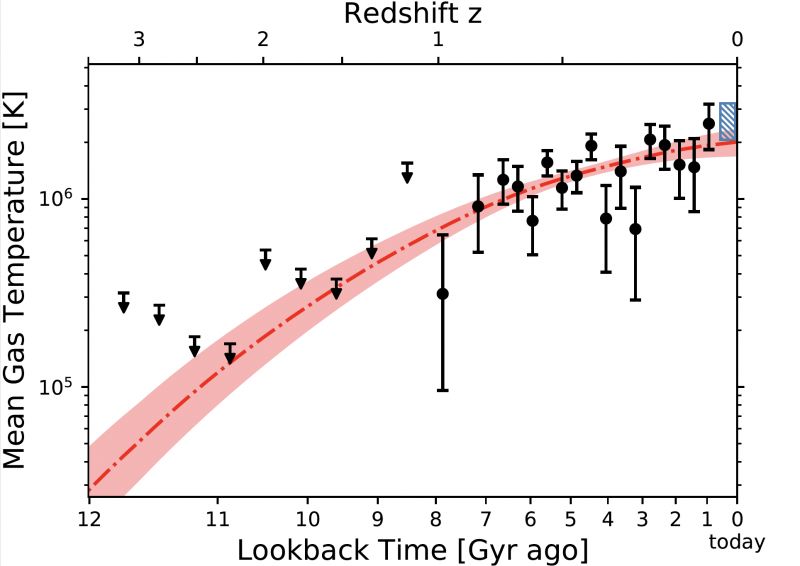 While this measurement is straightforward in principle, collecting the necessary data was a major undertaking. The study, which has been published in the Astrophysical Journal, was done in a collaboration of researchers at the Kavli IPMU, the Ohio State University, the Johns Hopkins University, and the Max Planck Institute for Astrophysics.

The researchers used data collected by two observatories, the Planck satellite and the Sloan Digital Sky Survey (SDSS). Planck is the European Space Agency mission which measured the cosmic microwave background radiation. SDSS collected detailed images and light spectra of galaxies. Combining the two data sets, the scientists were able to measure the amount of thermal pressure around the locations of galaxies and clusters of galaxies.

“It took astronomers more than 15 years to collect the necessary data using a telescope on the ground and one in space,” said Brice Ménard who led the analysis with Chiang. Ménard, who has been a visiting scientist at the Kavli IPMU since 2011, added: “On the analysis side, our team spent four years developing the algorithms necessary to extract the signal from these data.”

What’s more, interpretation of the data required a physical model, which was provided by Ryu Makiya, a research fellow at the Kavli IPMU. “Combining the latest data with a state-of-the-art theoretical model, we were able to reveal how the temperature of the Universe evolved, and how it was linked to formation of the large-scale structure of the Universe,” Makiya said. “The next goal is to understand details of the physics of thermal and non-thermal phenomena.”

Chiang, from the Ohio Stated University, added: “Our new measurement provides a direct confirmation of the seminal work by Jim Peebles—the 2019 Nobel Laureate in Physics—who laid out the theory of the emergence large-scale structure of the Universe.”

The study determined that about eight billion years ago (at a redshift z=1), the mean electron temperature was some 700,000 Kelvin, rising to about two million Kelvin today. Furthermore, the scientists determined that its evolution is almost entirely driven by the growth of structures, as gas is shock heated in collapsing large-scale structures.

Back in 2000, Eiichiro Komatsu, a Principal Investigator at the Kavli IPMU and Director at  the Department of Physical Cosmology at the Max Planck Institute for Astrophysics, was also involved in a previous effort to calculate how the temperature of the Universe evolved. “For 20 years, we have been studying how to measure this using the Sunyaev-Zeldovich effect,” he remembered. “We now have finally measured the temperature of the Universe, not only thanks to the remarkable progress in observational data, but also due to the dedicated efforts of brilliant young scientists such as Yi-Kuan Chiang and Ryu Makiya. This is very satisfying,” Komatsu added.