November 17, 2020
Kavli Institute for the Physics and Mathematics of the Universe (Kavli IPMU) 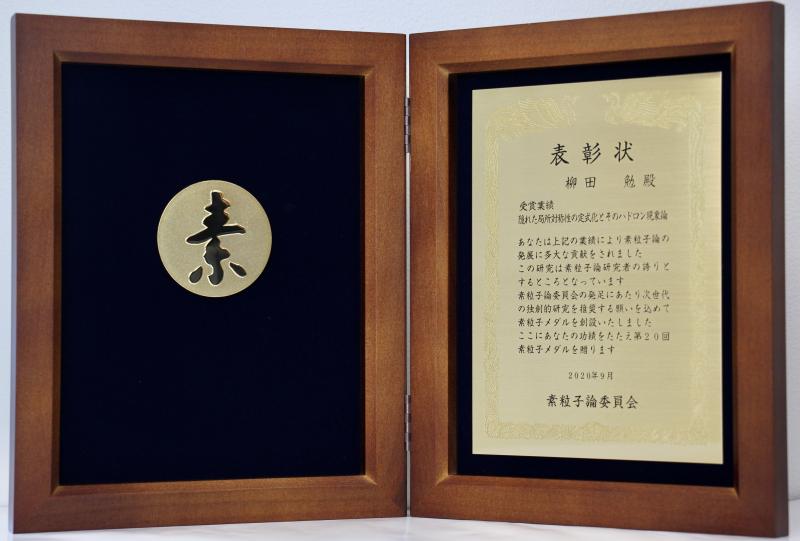 In September, Kavli IPMU Visiting Senior Scientist Tsutomu Yanagida was awarded the 20th Particle Physics Medal of Japan. The award is conferred by the Particle and Nuclear Theory Forum of the Physical Society of Japan to persons who have given long-term and important contributions to the development of particle physics theory.

Yanagida’s award-winning achievement was in recognition of his work in a paper titled “Formulation of a Hidden Local Symmetry and its Application to Hadron Physics.” In a prior publication—titled “Is the ρ Meson a Dynamical Gauge Boson of Hidden Local Symmetry?”—Yanagida and his collaborators succeeded in formulating a hidden local symmetry in QCD (quantum chromodynamics), and proposed the \rho meson as a composite gauge field.

This paper attracted many researchers working not only on hadron phenomenology, but also nuclear physics. The proposal is now regarded as a very useful and effective theory in studying hadron and nuclear physics. Furthermore, the proposal turned out to be related to very deep phenomena in advanced quantum field theories in the 21st century, including holographic QCD.

“It is highly commendable that, since its formulation, the proposal has continued to influence many particle physics researchers, and, over the years, has greatly contributed to the development of theoretical research in particle physics,” a representative of the  Physical Society of Japan said.

Remembering the journey that preceded the award, Yanagida, who is also a professor at the Tsung-Dao Lee Institute of Shanghai Jiao Tong University, said: “When I was a PD [Privatdozent] at the Max Planck Institute for Physics in Munich, theoretical physicist J. J. Sakurai visited for almost one year in 1982. During his stay, I got very interested in his idea that the \rho meson was a composite gauge boson of QCD.

“Unfortunately, the weak gauge boson was discovered in the beginning of 1983, as predicted by the electroweak gauge theory. So, we failed. However, my colleague at the time Choon-Kyu Lee and I remembered the words of Nobel Prize-wining physicist Steven Weinberg.

“However, we never completed the work, since I had to leave Munich soon thereafter. A year after I returned to Japan, I met theoretical physicist Taichiro Kugo in Kyoto University and asked him to formulate our idea on the \rho meson. He was very much interested in it.” In 1985, Yanagida et al’s award-winning, and still influential, paper was published.