Study of Supergiant Star Betelgeuse Unveils the Cause of its Pulsations; Recalibrated its Mass, Radius, and Distance

Study of Supergiant Star Betelgeuse Unveils the Cause of its Pulsations; Recalibrated its Mass, Radius, and Distance

February 4, 2021
Kavli Institute for the Physics and Mathematics of the Universe (Kavli IPMU) 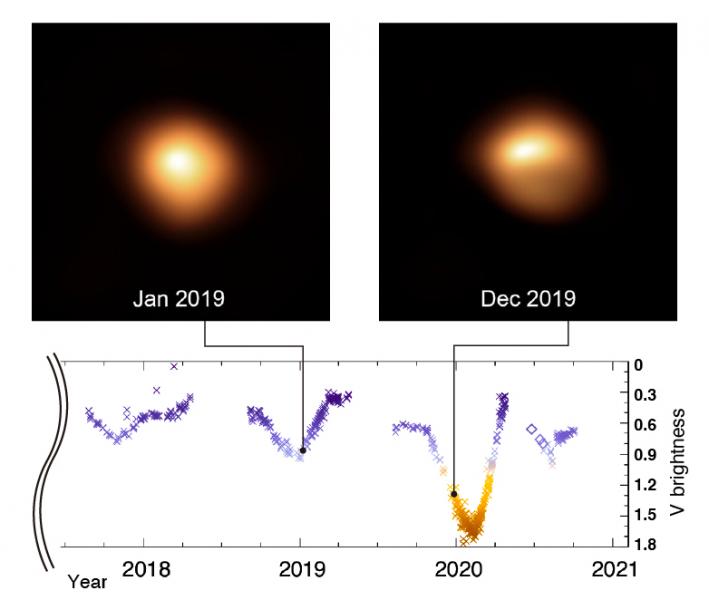 Betelgeuse is normally one of the brightest, most recognizable stars of the winter sky, marking the left shoulder of the constellation Orion. But lately, it has been behaving strangely: an unprecedentedly large drop in its brightness has been observed in early 2020 (Figure 1), which has prompted speculation that Betelgeuse may be about to explode.

To find out more, an international team of scientists, including Ken'ichi Nomoto at the Kavli Institute for the Physics and Mathematics of the Universe (Kavli IPMU), conducted a rigorous examination of Betelgeuse. They concluded that the star is in the early core helium-burning phase (which is more than 100,000 years before an explosion happens) and has smaller mass and radius—and is closer to Earth—than previously thought. They also showed that smaller brightness variations of Betelgeuse have been driven by stellar pulsations, and suggested that the recent large dimming event involved a dust cloud.

The research team is led by Dr. Meridith Joyce from the Australian National University (ANU), who was an invited speaker at Kavli IPMU in January 2020, and includes Dr. Shing-Chi Leung, a former Kavli IPMU project researcher and a current postdoctoral scholar at the California Institute of Technology, and Dr. Chiaki Kobayashi, an associate professor at the University of Hertfordshire, who has been an affiliate member of Kavli IPMU. 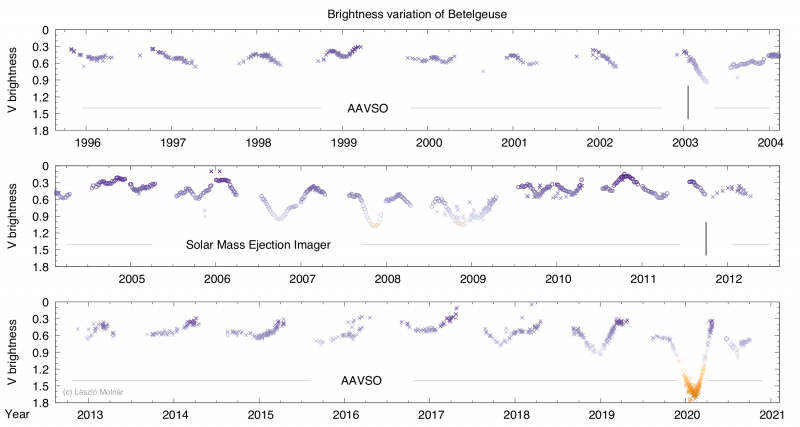 The team analyzed the brightness variation of Betelgeuse (Figure 2) by using evolutionary, hydrodynamic and seismic modelling. They achieved a clearer idea than before that Betelgeuse is currently burning helium in its core. They also showed that stellar pulsations driven by the so-called kappa-mechanism is causing the star to continuously brighten or fade with two periods of 185 (±13.5) days and approximately 400 days. But the large dip in brightness in early 2020 is unprecedented, and is likely due to a dust cloud in front of Betelgeuse, as seen in the image (Figure 1).

Their analysis reported a present-day mass of 16.5 to 19 solar mass—which is slightly lower than the most recent estimates. The study also revealed how big Betelgeuse is, as well as its distance from Earth. The star’s actual size has been a bit of a mystery: earlier studies, for instance, suggested it could be bigger than the orbit of Jupiter. However, the team’s results showed Betelgeuse only extends out to two-thirds of that, with a radius 750 times the radius of the sun. Once the physical size of the star is known, it will be possible to determine its distance from Earth. Thus far, the team's results show it is a mere 530 light years from us, or 25 percent closer than previously thought.

Their results imply that Betelgeuse is not at all close to exploding, and that it is too far from Earth for the eventual explosion to have significant impact here, even though it is still a really big deal when a supernova goes off. And as Betelgeuse is the closest candidate for such an explosion, it gives us a rare opportunity to study what happens to stars like this before they explode.

Paper details
Journal: The Astrophysical Journal
Title: Standing on the Shoulders of Giants: New Mass and Distance Estimates for Betelgeuse through Combined Evolutionary, Asteroseismic, and Hydrodynamic Simulations with MESA

Research contact:
Ken’ichi Nomoto
Senior Scientist
Kavli Institute for the Physics and Mathematics of the Universe, University of Tokyo
E-mail: nomoto_at_astron.s.u-tokyo.ac.jp
TEL: +81-4-7136-5940
Please change * _at_ to @

Media contact:
John Amari
Press officer
Kavli Institute for the Physics and Mathematics of the Universe, The University of Tokyo
E-mail: press_at_ipmu.jp
TEL: 080-4056-2767
Please change *_at_ to @