March 24, 2021
Kavli Institute for the Physics and Mathematics of the Universe

Concern over attractiveness to the opposite sex affects the masculine image of physics and mathematics only in England, while having a negative view of intellectual women is correlated with a masculine image of mathematics as a field only in Japan, according to a survey conducted in the two countries by a Japanese research group. This comparative study shows that programs to increase women’s representation in these fields must take into account each country’s social context surrounding gender roles.

Why do so few women choose to study and work in STEM (science, technology, engineering and mathematics)? It is well known that a diverse environment, whether in education, business, or government, can lead to more innovative and inclusive outcomes. However, women are globally underrepresented in STEM at the university level, leading to fewer women going on to jobs in these fields, even in currently important areas such as artificial intelligence and quantum computing.

Prior research by a group led by Professor Hiromi M. Yokoyama at the University of Tokyo has shown that the Japanese public regards STEM subjects as more suitable for men than women. Research in the U.K. has also shown that the public regards physics and mathematics as having a masculine image, which may discourage girls in both countries from choosing these fields. Yet, while women are underrepresented in STEM in both the U.K. and Japan, gender equality is far higher in the U.K. compared to Japan, suggesting that social differences may play a role in STEM participation.

As part of a three-year project looking at why so few women in Japan choose to study physics and mathematics, Yokoyama’s research group has proposed a new model to account for cultural factors and explain the masculine image of these fields. The group tested their model with a cross-cultural survey in England and Japan (figure 1). This model builds on earlier research by a group at the University of Washington in the U.S. 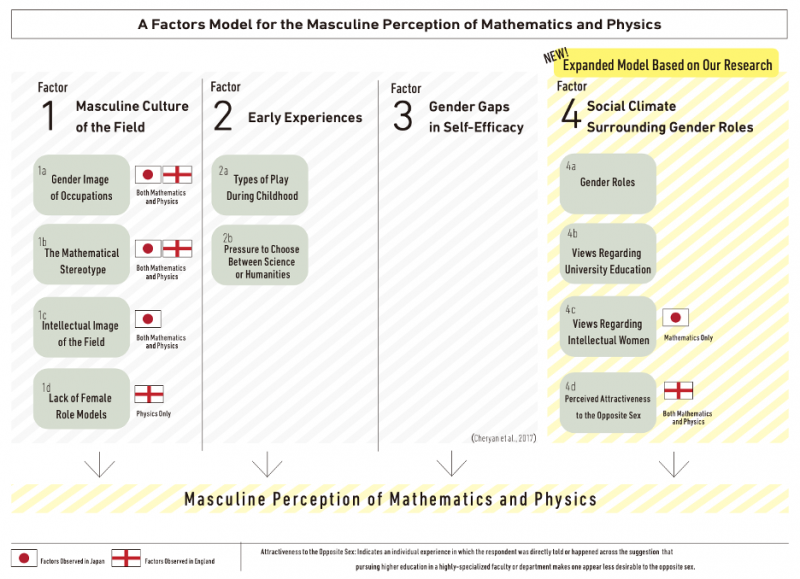 “The U.S. group’s model of underrepresentation suggests three factors that explain why women in the U.S. may avoid information science, engineering and physics at university: the masculine culture of the field, lack of early experience, and gender gaps in self-efficacy (belief in one’s own ability to succeed),” said Yokoyama. “Our model explaining the masculine image of these fields builds on this to add an extra dimension, the social climate surrounding gender roles. We carried out an online survey of the public in England and Japan to test our new model in relation to the masculine image of physics and mathematics.”

Yokoyama’s group found differences between English and Japanese respondents. In particular, Japanese respondents with a negative view of intellectual women were more likely to regard mathematics as a masculine field. In England, respondents were instead more likely to have heard that choosing a particular faculty or department would make you less attractive to the opposite sex (due to survey constraints in Japan, attitudes towards same-sex partnerships could not be surveyed). Both of these results suggest that differing attitudes surrounding gender roles contribute to the masculine image of physics and mathematics.

“We hope that achieving gender equality will reduce the masculine image of mathematics and physics. However, while we have much to learn from each other in the international community when tackling the gender gap, our study shows that we must also remain sensitive to what works in each social context. There is no ‘one size fits all’ solution,” said Yokoyama.

The research was published online in the journal Public Understanding of Science, a peer-reviewed international journal covering all aspects of the inter-relationships between science (including technology and medicine) and the public.

Related links
Project website (Japanese): http://member.ipmu.jp/hiromi.yokoyama/ristex2017.html
Click here to view the press release from the University of Tokyo "Social context affects gendered views of STEM subjects in England and Japan -New model of why physics and mathematics are seen as masculine subjects- "