April 22, 2021
Kavli Institute for the Physics and Mathematics of the Universe (Kavli IPMU) 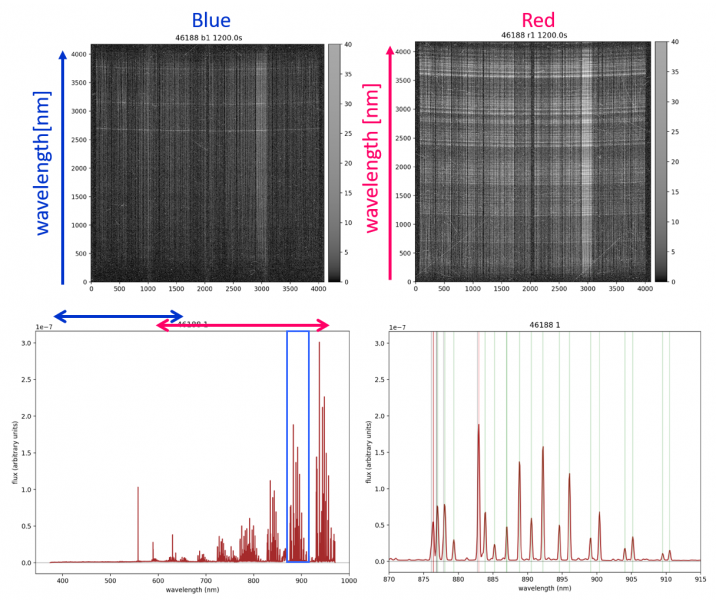 The two most recent additions to the Subaru Telescope, including a miniature telescope, have enabled an international research team led by members of the Kavli Institute for the Physics and Mathematics of the Universe (Kavli IPMU) to observe night sky spectra for the first time.

The team has been developing the Prime Focus Spectrograph (PFS), one of the next-generation core observation instruments to be mounted on the Subaru Telescope, located near the summit of Maunakea in Hawaii. It aims to uncover the nature of dark matter and dark energy by studying the spectra of light from distant objects in the Universe.

On February 8, Subaru Telescope engineers, staff, and researchers spent two days attaching the PFS instrument’s first fiber cable (Figure 1, right) to the telescope and the telescope dome. The cable is more than 50m long, and so researchers were careful to minimize stress on the cable. Any stress on the cable, such as from telescope movements, or temperature changes within the dome, can degrade the image quality of the light coming in from the sky.

Then, on February 11, a small telescope (Figure 2) called the Subaru Night-Sky Spectrograph (SuNSS) with a 4cm aperture, was attached to the spider part of the Subaru Telescope (Figure 3). With installation of the SuNSS and the fiber cable, the PFS spectrometer was able to capture the spectrum of the night-sky for the first time (Figure 4).

The fiber cable unit was first assembled by PFS project members in the United Kingdom, and finished and tested by the National Astrophysical Laboratory of Brazil (LNA).

In the future, the team will continue making observations, and use the acquired data to advance software development to be used for data analysis, and to prepare for engineering observations.

The PFS project is expected to start scientific observations from 2023. 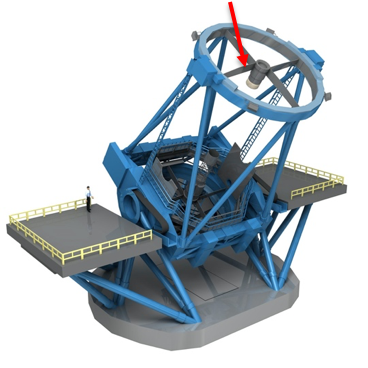 What is the Prime Focus Spectrograph
The Prime Focus Spectrograph (PFS) is an instrument currently being developed, which will be mounted on the 8.2m Subaru Telescope at the summit of Maunakea, Hawaii. The instrument splits up the light from celestial objects, such as stars and galaxies, into their various wavelengths. The resulting data set is called a “spectrum”, which is used to study various details of a celestial object such as its motion.

The PFS will be capable of collecting spectra from ~2400 celestial objects at once.

Sub-components and sub-systems of the PFS are being built, assembled, and tested in the US, France, Brazil and Taiwan, before being shipped to the Subaru Telescope. It is aiming to be ready for operation of scientific use in 2022.

What will the Prime Focus Spectrograph study?
Using the prime focus of the Subaru Telescope’s 8.2m primary mirror, researchers can look at a large area of the night sky at one time. Using the Hyper Suprime-Cam at the Subaru’s prime focus, researchers can take sharp images over a wide area of sky in one exposure and find many celestial objects far into the distant Universe. Using the PFS, researchers will be able to take their spectra quickly (up to about 2400 objects in one exposure), measure the motions of stars, see how far the galaxies are, and obtain various other information which can be seen only on spectra and not visually in images.

By studying spectra of a large number of objects, researcher will be able to create a census of the Universe, uncovering clues about the identity of dark matter, dark energy, and galaxy formation and evolution.

Contacts
About the research
Naoyuki Tamura
Project Associate Professor
Kavli Institute for the Physics and Mathematics of the Universe
University of Tokyo
E-mail: naoyuki.tamura_at_ipmu.jp
* Change _at_ to @

April 27, 2018
Next generation of telescope equipment begins arriving in Hawaii