June 8, 2021
Kavli Institute for the Physics and Mathematics of the Universe (Kavli IPMU) 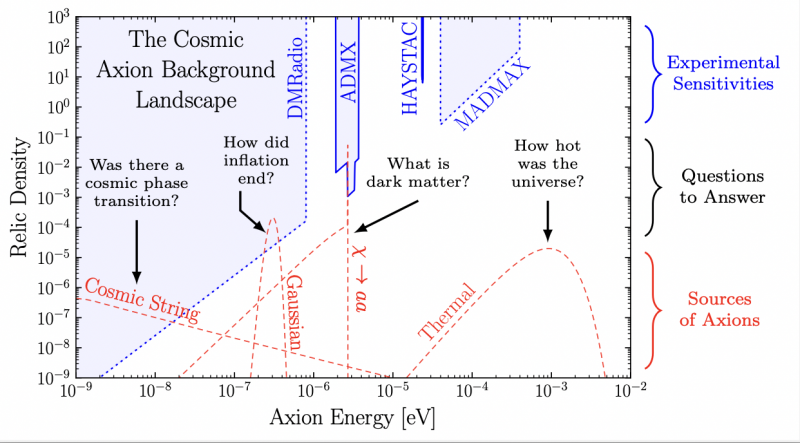 Finding the hypothetical particle axion could mean finding out for the first time what happened in the Universe a second after the Big Bang, suggests a new study published in Physical Review D on June 7.

How far back into the Universe’s past can we look today? In the electromagnetic spectrum, observations of the Cosmic Microwave Background — commonly referred to as the CMB — allow us to see back almost 14 billion years to when the Universe cooled sufficiently for protons and electrons to combine and form neutral hydrogen. The CMB has taught us an inordinate amount about the evolution of the cosmos, but photons in the CMB were released 400,000 years after the Big Bang making it extremely challenging to learn about the history of the universe prior to this epoch.

To open a new window, a trio of theoretical researchers, including Kavli Institute for the Physics and Mathematics of the Universe (Kavli IPMU) Principal Investigator, University of California, Berkeley, MacAdams Professor of Physics and Lawrence Berkeley National Laboratory senior faculty scientist Hitoshi Murayama, Lawrence Berkeley National Laboratory physics researcher and University of California, Berkeley, postdoctoral fellow Jeff Dror (now at University of California, Santa Cruz), and UC Berkeley Miller Research Fellow Nicholas Rodd, looked beyond photons, and into the realm of hypothetical particles known as axions, which may have been emitted in the first second of the Universe’s history.

In their paper, they suggest the possibility of searching for an axion analogue of the CMB, a so-called Cosmic axion Background or CaB.

While hypothetical, there are many reasons to suspect that the axion could exist in our Universe.

For one, axions are a generic prediction of string theory, one of today’s best hopes for a theory of quantum gravity. The existence of an axion could further help resolve the long standing puzzle of why we have yet to measure an electric dipole moment for the neutron, an issue more formally known as the “Strong CP Problem”. More recently, the axion has become a promising candidate for dark matter, and as a consequence researchers are rapidly searching for axion dark-matter.

In their paper, the researchers point out that as experimentalists develop more sensitive instruments to search for dark matter, they may stumble upon another sign of axions in the form of the CaB. But because the CaB shares similar properties with dark-matter axions, there is a risk the experiments would throw the CaB signal out as noise.

Finding the CaB at one of these instruments would be a double discovery. Not only would it confirm the existence of the axion, but researchers worldwide would immediately have a new fossil from the early Universe. Depending on how the CaB was produced, researchers could learn about various different aspects of the Universe’s evolution never possible before (Figure).

“What we have proposed is that, by changing the way current experiments analyze data, we may be able to search for left-over axions from the early universe. Then, we might be able to learn about the origin of dark matter, phase transition or inflation at the beginning of the Universe. There are already experimental groups who have shown interest in our proposal, and I hope we can find out something new about the early Universe that wasn’t known before,” says Murayama.

"The evolution of the universe can produce axions with a characteristic energy distribution. By detecting the energy density of the universe currently made up of axions, experiments such as MADMAX, HAYSTAC, ADMX, and DMRadio could give us answers to some of the most important puzzles in cosmology, such as, 'How hot did our universe get?', 'What is nature of dark matter?', 'Did our universe undergo a period of rapid expansion known as inflation?', and 'Was there ever a cosmic phase transition?'," says Dror.

The new study provides reason to be excited about the axion dark-matter program. Even if dark matter is not made of axions, these instruments may provide an image of the Universe when it was less than a second old.

This study was accepted as an “Editors’ Suggestion” in the journal Physical Review D.

Research contact:
Hitoshi Murayama
Principal Investigator
Kavli Institute for the Physics and Mathematics of the Universe, The University of Tokyo
E-mail: hitoshi.murayama_at_ipmu.jp
Please change * _at_ to @