Research into “Birth of Elements” awarded grant by the Leverhulme Trust

Research into “Birth of Elements” awarded grant by the Leverhulme Trust

June 22, 2021
Kavli Institute for the Physics and Mathematics of the Universe (Kavli IPMU) 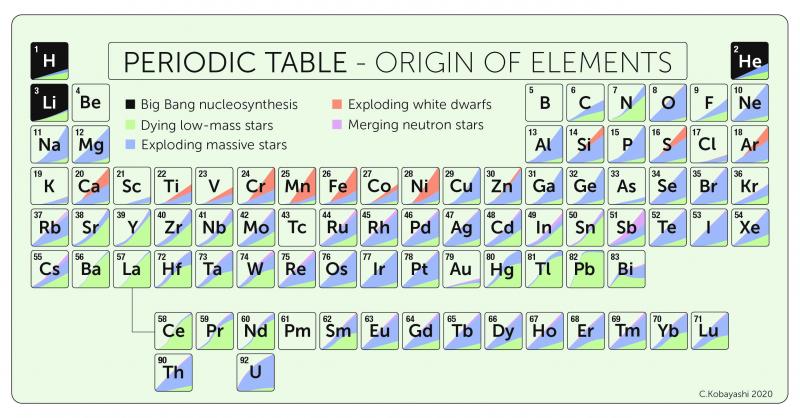 Chiaki Kobayashi, a visiting scientist at the Kavli Institute for the Physics and Mathematics of the Universe, and Associate Professor at the University of Hertfordshire, has been awarded a Research Fellowship by the Leverhulme Trust in the United Kingdom.

The Leverhulme Trust was established in the United Kingdom after the death of Lord Leverhulme in 1925. Lord Leverhulme, a committed philanthropist, left a proportion of his company to provide scholarships for research and education. The 2021 Research Fellowship grant supports projects, including Kobayashi’s project, in the natural sciences, humanities, and social sciences.

Kobayashi has been working with the Kavli IPMU since 2009, collaborating with several researchers including the Kavli IPMU Senior Scientist Ken’ichi Nomoto, to study the physics of supernovae, the origin of elements, and the evolution of galaxies, from the elemental abundances in the Milky Way Galaxy and other nearby galaxies. She has also been using super computers to reproduce observation data, as well as predicting the chemical and dynamical (chemo-dynamical) evolution of galaxies in the Universe. Recently, Kobayashi joined the Prime Focus Spectrograph (PFS) project, an international project to develop one of the next-generation core observation instruments to be mounted on the Subaru Telescope in Hawaii.

PFS is set to begin real data observations in 2023. The instrument splits up light from about 2400 celestial objects such as stars and galaxies into their various wavelengths, all at once. The resulting spectrum can be used to study details of the celestial objects such as its motion, and it is hoped the information will uncover clues about the identity of dark matter, dark energy, galaxy formation and evolution.

“To measure the abundances of elements in the Universe, spectroscopy is essential: by dispersing a light with a prism or grating, absorption and emission lines appear at a specific wavelength of elements, and from the strength of these lines it is possible to measure element abundances. This is fundamentally different from just taking pictures of astronomical objects (imaging), and only recently large samples from spectroscopic surveys have become possible. From such survey observations of stars in our Milky Way Galaxy, we now have good understanding on “the physical origin of elements”. Taking this one step further, my new research project will show “the birth of elements” in the Universe. What will be the distributions of elements beyond Milky Way, or those for very distant galaxies?

“The IPMU is leading the development of a super wide-field and multi-object spectrograph, Prime Focus Spectrograph (PFS) to be installed on 8.2m Subaru Telescope in Hawaii, which will generate the cutting-edge observations needed, combining high sensitivity spectroscopy with huge numbers of objects. The observational survey will commence in 2023 and will continue for several years. The PFS Galactic Archaeology group is planning to measure elemental abundances, as well as their motions tracing “dark matter”, in stars at our Galactic outer disk/halo, in several dwarf spheroidal galaxies in our Local Group, and in the Andromeda galaxy (our nearest neighbour large galaxy). The PFS Galaxy Evolution group, co-led by Dr. John Silverman at IPMU, will also obtain the evolution of the mass-metallicity relations of distant galaxies seen when the Universe was only 20% of its current age, as well as kinematic properties of these galaxies. As a member of both working groups I am very much looking forward to comparing the new observational results to my own theoretical predictions,” said Kobayashi.

Kobayashi’s collaborators at Kavli IPMU have made the following comments.

“Chiaki brings to the PFS Galaxy Evolution team the ability to compare the observational tracers of chemical enrichment with results from computer simulations that will further elucidate how metals are distributed in and out of galaxies and as a function of their environment,” said John Silverman, Kavli IPMU Associate Professor.

“Measuring chemical element abundance from spectroscopic observations of stars is very much like digging up fossils on Earth. It is a record of what happened in the Milky Way galaxy in the past, and allows us to paint a picture of how the Galaxy has evolved. It has been predicted that elements such as europium or gold could be the product of neutron stars colliding, which would have also produced gravitational waves. By studying the composite ratio of elements, it becomes possible to find out how many neutron star collisions or black holes there have been over history. This could be a big help in advancing gravitational wave astronomy research as well. With Kobayashi's expertise, I hope we can also further advance our understanding of galaxy history using the PFS,” said Masahiro Takada, Kavli IPMU Principal Investigator.

“Once thousands of stars in our galaxy are observed and their positions, velocities and elemental abundances are accurately measured, we can start to do archaeology. Namely, exploiting the stellar abundances as fossil records and tracers, we can play back the history of star formation and dynamical evolution in our galaxy as if it were a video. On the other hand, once many galaxies in the distant universe are observed and are characterized as a function of time, we should be able to understand how such diverse galaxy populations emerged and evolved to what we see today. To fully understand the history of galaxy formation and evolution, it is crucial to get insight from multiple viewing angles through both approaches. The PFS will play a key role as it will be well suited to conduct a large census of stars and galaxies over wide areas of the sky. PFS instrumentation is progressing and coming close to completion, so Chiaki and all researchers around the world, please stay tuned,” said Naoyuki Tamura, Kavli IPMU Project Associate Professor.