Unveiling substructures at the edge of the Galaxy

Unveiling substructures at the edge of the Galaxy

December 16, 2021
Kavli Institute for the Physics and Mathematics of the Universe (Kavli IPMU) 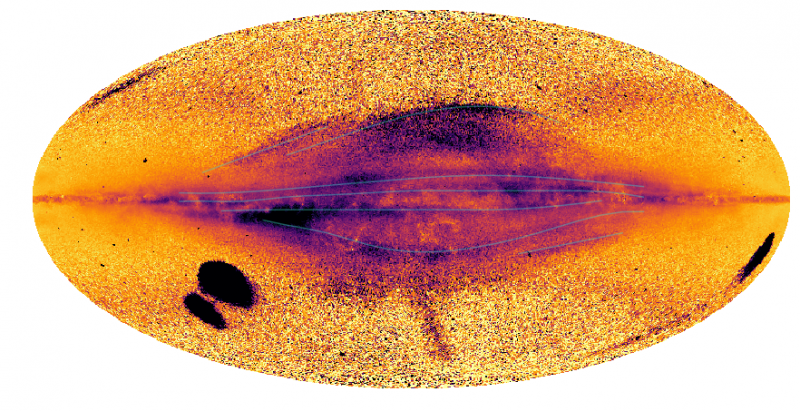 An international team of astronomers has revealed a new map of the Milky Way’s outer disc showing remains of tidal arms excited from interactions with satellite galaxies in the distant past. The findings were published in the Monthly Notices of the Royal Astronomical Society on December 14.

“Typically this region of the Milky Way has remained poorly explored due to the intervening dust which severely obscures most of the Galactic midplane”, says Chervin Laporte, first author in this study who carried out his research while at the Kavli Institute for the Physics and Mathematics of the Universe, who is currently researcher at the Institute of Cosmos Sciences of the University of Barcelona (ICCUB-IEEC). “While dust affects the luminosity of a star, its motion remains unaffected. As a result, one can use the stars motion to perform tomography of the Galaxy’s outermost regions,” he added.

Our Milky Way Galaxy is surrounded by 50 satellite galaxies, and has engulfed numerous galaxies in its past. Currently, the Milky Way is thought to have been perturbed by the Sagittarius dwarf galaxy. However, in its more distant past it may have interacted with another intruder, the Gaia Sausage, which has now dispersed its debris into the stellar halo on the outer rim of our galaxy.

The researchers came up with the hypothesis that these thin structures were remains of tidal arms from the Milky Way disc, which were excited at different times by various satellites in the past.

“In an earlier study, we showed that one of the thread-like structures in the outer disc, called the Anticenter Stream, had stars which were predominantly older than 8 billion years, making it potentially too old to have been caused by Sagittarius alone but more in line with a Sausage origin. Another possibility would be that not all these structures are actually genuine disc substructures, but instead form the crests of vertical density waves in the disc seen in projection forming an optical illusion that the disc is highly substructured,” says Laporte.

So the team analysed the Gaia motion data, made available in December 2020 by the European Space Agency, to identify coherent structures.

The map revealed the existence of many previously unknown coherently rotating filamentary structures at the edge of the disc. It also gave a sharper global view of previously known structures. Numerical simulations predict such filamentary structures to form in the outer disc from past satellite interactions, however the sheer quantity of substructure revealed by this map was not expected and remains a mystery.

Now to further disentangle the two, the team has secured a dedicated follow-up programme with the WEAVE spectrograph to study the similarities/differences in stellar populations in each substructure. Upcoming surveys (WEAVE, SDSS-V and PFS) will also shed light into their origins through complementary radial velocities, chemical abundances and potentially stellar ages.

Media contact
Motoko Kakubayashi
Press officer
Kavli Institute for the Physics and Mathematics of the Universe, The University of Tokyo
E-mail: press_at_ipmu.jp
* Please change _at_ to @