January 12, 2022
Kavli Institute for the Physics and Mathematics of the Universe (Kavli IPMU) 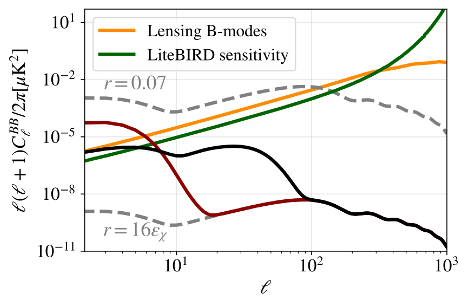 The upcoming satellite experiment LiteBIRD is expected to probe the physics of the very early Universe if the primordial inflation happened at high energies. But now, a new paper in Physical Review Letters shows it can also test inflationary scenarios operating at lower energies.

Cosmologists believe that in its very early stages, the Universe underwent a very rapid expansion called “cosmic inflation”. A success story of this hypothesis is that even the simplest inflationary models are able to accurately predict the inhomogeneous distribution of matter in the Universe. During inflation, these vacuum fluctuations were stretched to astronomical scales, becoming the source all the structure in the Universe, including the Cosmic Microwave Background anisotropies, distribution of dark matter and galaxies.

Several inflationary models constructed in the framework of quantum gravity often predict very low energy scale for inflation, and so would be untestable by LiteBIRD. However, a new study by researchers, including the Kavli Institute for the Physics and Mathematics of the Universe (Kavli IPMU), has shown the opposite. The researchers argue such scenarios of fundamental importance can be tested by LiteBIRD, if they are accompanied by additional fields, sourcing gravitational waves.

The researchers suggest an idea, logically very different from the usual.

“The quantum fluctuations of scalar fields during inflation are typically small, and such induced gravitational waves are not relevant in standard inflationary scenarios. However, if the fluctuations of the additional fields are enhanced, they can source a significant amount of gravitational waves,” said paper author and Kavli IPMU Project Researcher Valeri Vardanyan.

Other researchers have been working on related ideas, but so far no successful mechanism based on scalar fields alone had been found.

“The main problem is that when you generate gravitational waves from enhanced fluctuations of additional fields, you also simultaneously generate extra curvature fluctuations, which would make the Universe appear more clumpy than it is in reality. We elegantly decoupled the generation of the two types of fluctuations, and solved this problem,” said Vardanyan.

In their paper, the researchers proposed a proof-of-concept based on two scalar fields operating during inflation.

"Imagine a car with two engines, corresponding to the two fields of our model. One of the engines is connected to the wheels of the car, while the other one is not. The first one is responsible for moving the car, and, when on a muddy road, for generating all the traces on the road. These represent the seeds of structure in the Universe. The second engine is only producing sound. This represents the gravitational waves, and does not contribute to the movement of the car, or the generation of traces on the road,” said Vardanyan.

The team quantitatively demonstrated their mechanism works, and even calculated the predictions of their model for the upcoming LiteBIRD mission (image).

Details of their study were published on December 15 in Physical Review Letters.

Research contact
Valeri Vardanyan
Project Researcher
Kavli Institute for the Physics and Mathematics of the Universe, The University of Tokyo
E-mail: valeri.vardanyan_at_ipmu.jp
* Please change _at_ to @

Misao Sasaki
Project Professor
Kavli Institute for the Physics and Mathematics of the Universe, The University of Tokyo
E-mail: misao.sasaki_at_ipmu.jp
* Please change _at_ to @

Media contact
Motoko Kakubayashi
Press officer
Kavli Institute for the Physics and Mathematics of the Universe, The University of Tokyo
E-mail: press_at_ipmu.jp
* Please change _at_ to @