July 22, 2022
Kavli Institute for the Physics and Mathematics of the Universe (Kavli IPMU) 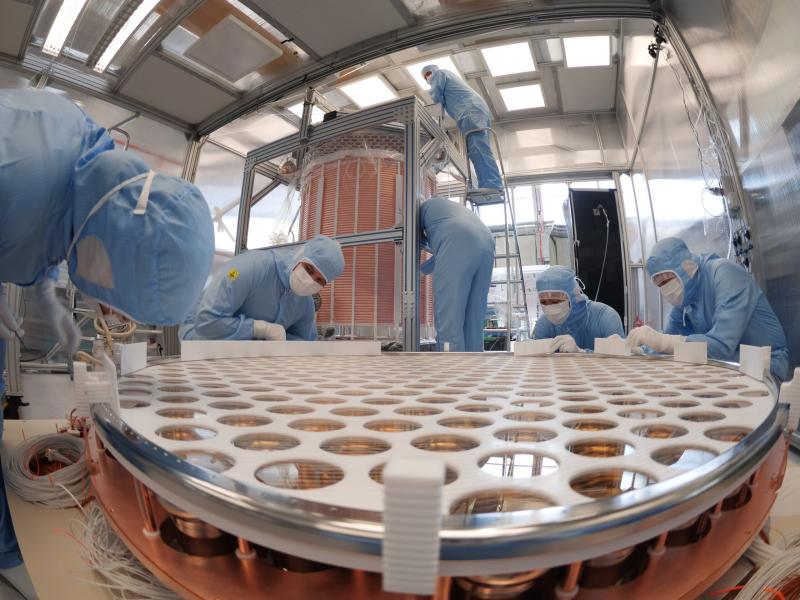 The XENONnT experiment was designed to look for elusive dark matter particles. The detector holds almost 6000 kg of ultrapure liquid xenon as a target for particle interactions; it is installed inside a water Cherenkov active muon and neutron veto, deep underground at the INFN Laboratori Nazionali del Gran Sasso in Italy. Despite the challenging pandemic situation, XENONnT was constructed and subsequently commissioned between spring 2020 and spring 2021. XENONnT took the first science data over 97.1 days, from July 6 to November 10, 2021.

Experiments of this type require the lowest possible levels of natural radioactivity of any kind, both from sources intrinsically present in the liquid xenon target and from construction materials and the environment. The former, dominated by radon, is the most difficult to reduce and its elimination represents the holy grail of current searches at the sensitivity level of XENONnT. However, the XENON collaboration has been instrumental in reducing radon to an unprecedentedly low-level, thanks to extensive material screening and the successful operation of an online cryogenic distillation column that actively removes radon from the xenon.

Two years ago, the XENON collaboration announced the observation of an excess of electronic recoil events in the XENON1T experiment. The result triggered a lot of interest and many publications since this could be interpreted as a signal of new physics beyond known phenomena. Interactions with electrons in the atomic shell within the liquid xenon from solar axions, neutrinos with an anomalous magnetic moment, axion-like particles, or hypothetical dark sector particles might induce so-called “electronic recoil” signals. Today the XENON collaboration has released the first results from its new and more sensitive experiment, XENONnT, with one-fifth of the electronic recoil background of its predecessor, XENON1T. The absence of an excess in the new data indicates that the origin of the XENON1T signal was trace amounts of tritium in the liquid xenon, one of the hypotheses considered at the time. In consequence, this leads now to very strong limits on new physics scenarios originally invoked to explain an excess.

With this new result, obtained through a blind analysis, XENONnT makes its debut, with an initial exposure slightly larger than 1 tonne x year. The existing data are being further analyzed to search for weakly interacting massive particles (WIMPs), one of the most promising candidates of Dark Matter in the Universe. XENONnT is meanwhile collecting more data, aiming for even better sensitivity as part of its science program for the next years. 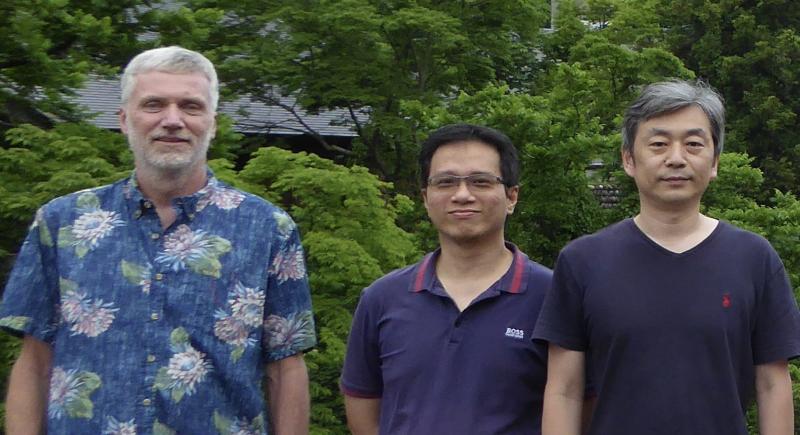 At Kavli Institute for the Physics and Mathematics of the Universe (Kavli IPMU) Kamioka Branch, Associate Professor Kai Martens, Project Associate Professor Masaki Yamashita, and Project Researcher Khai Bui are working hand in hand to search for dark matter with the XENONnT experiment.

Martens has been leading the effort to transfer and adapt our Kamioka water Cherenkov neutron detection technology to XENONnT. He is the leader of XENON in Japan and XENON Principal Investigator at Kavli IPMU.

“This first result from the XENONnT upgrade of XENON1T clearly shows that we produced the dark matter detector with the cleanest liquid xenon target in the world! And determined as we are to become the first to find dark matter particles with our detector, we are still pushing forward to further improve XENONnT’s sensitivity. With this first result, we clean up a XENON1T legacy and emphasize again that our dark matter detection instrument is very versatile and also gives us access to many other interesting physics topics, and that as a collaboration, we care about that too,” said Martens.

Yamashita, who serves as the XENON Collaboration Board’s co-chair and leader of its liquid xenon purification working group, led the effort to provide the purest liquid xenon with its world record setting electron lifetime for the XENONnT detector.

“It was not so easy to go and work at LNGS during the covid-19 environment. And we had the meeting almost every night with the members in abroad due to the time-zone difference. Despite this difficult situation, teamwork makes new fantastic result,“ said Yamashita.

Bui was recently awarded a XENON medal by the collaboration for his effort on the XENONnT neutron veto operations and significant contributions both onsite at LNGS and from Kamioka.

"We are still pushing ourselves for further improvement of our detector in the near future, so stay tuned," said Bui.

For more details and the full press release, please read the official announcement by the Gran Sasso National Laboratory (LNGS).