Stone samples brought back to Earth from asteroid Ryugu have had their elemental composition analyzed using an artificially generated muon beam from the particle accelerator in J-PARC. Researchers found a number of important elements needed to sustain life, including carbon, nitrogen, and oxygen, but also found the oxygen abundance relative to silicon in asteroid Ryugu was different from all meteorites that have been found on Earth, reports a new study in Science.

In 2014, the unmanned asteroid explorer Hayabusa 2 was launched into space by the Japan Aerospace Exploration Agency (JAXA) with a mission to bring back samples from asteroid Ryugu, a type C asteroid that researchers believed was rich in carbon. After successfully landing on Ryugu and collecting samples, Hayabusa 2 returned to Earth in December 2020 with samples intact.

This was important, because if asteroids in the Solar System were built at the beginning of the formation of the Solar System itself, then they would still be withholding information about the average elemental composition at that time, and therefore of the entire Solar System.

Analysis of meteorites that have fallen to Earth have been carried out in the past, but it is possible these samples have been contaminated by the Earth's atmosphere. So, until Hayabusa 2, no one knew what the chemical composition of an asteroid was for sure.

But the researchers faced a challenge. Because of the limited amount of samples and the large number of other researchers wanting to study them, they needed to find a way to run their analyses without damaging them so that the samples could be passed on to other groups.

The team had developed a new method, which involved shooting a quantum beam, or specifically a beam of negative muons, produced by one of the world's largest high-energy particle accelerators J-PARC in Ibaraki prefecture, Japan, to identify the chemical elements of sensitive samples without breaking them.

Muons are one of the elementary particles in the universe. Their ability to penetrate deeper into materials than X-rays makes them ideal in material analysis. When a negative muon is captured by the irradiated sample, a muonic atom is formed (figure 1). The muonic X-rays emitted from the new muonic atoms have high energy, and so can be detected with high sensitivity. This method was used to analyze the Ryugu samples. 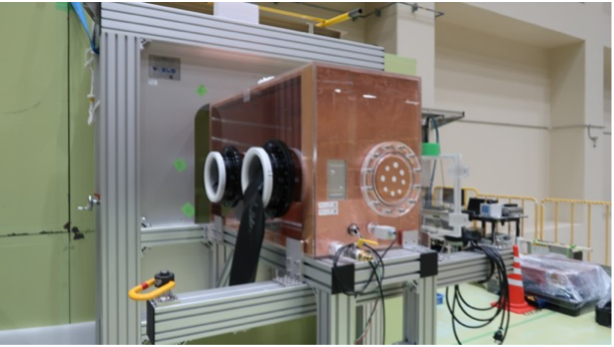 But there was another challenge. In order to keep the samples from being contaminated by the Earth's atmosphere, the researchers needed to keep the samples out of contact with oxygen and water in the air. Therefore, they had to develop an experimental setup, casing the sample in a chamber of helium gas (figure 2). The inner walls of the chamber were lined with pure copper to minimize the background noise when analyzing the samples.

In June 2021, 0.1 grams of Ryugu asteroid were brought into J-PARC, and the researchers ran their muon X-ray analysis, which produced an energy spectrum (figure 3). In it, they found the elements needed to produce life, carbon, nitrogen and oxygen, but they also found the sample had a composition similar to that of carbonaceous chondrite (CI chondrite) asteroids, which are often referred to as the standard for solid substances in the Solar System. This showed the Ryugu stones were some of the earliest stones to have formed in our Solar System.

However, while similar in composition to CI chondrites, the Ryugu sample’s oxygen abundance relative to silicon was about 25 per cent less than that of the CI chondrite (figure 4). The researchers say this could indicate that the excess oxygen abundance relative to silicon in CI chondrites could have come from contamination after they entered Earth's atmosphere. Ryugu stones could set a new standard for matter in the Solar System.

The team’s results show the success of the muonic x-ray method, and that it can be used to analyze samples from future space missions.

Details of this study were published in Science on September 22. 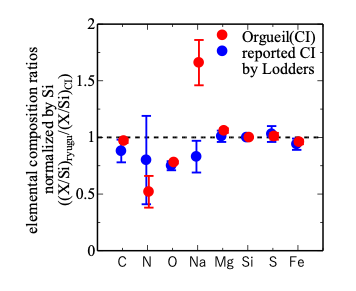 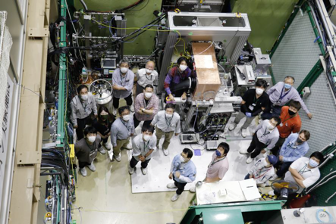