December 27, 2022
Kavli Institute for the Physics and Mathematics of the Universe (Kavli IPMU) 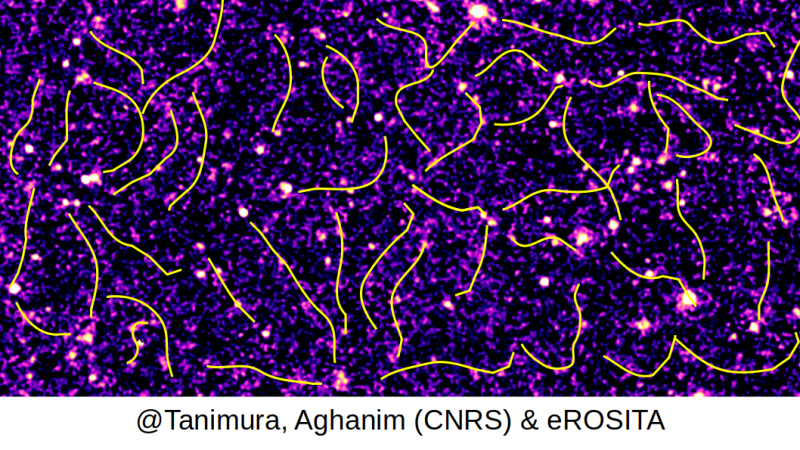 X-ray signals associated with a thermal emission from a hot plasma in the cosmic filaments have been reported in a recent study published in Astronomy and Astrophysics.

The millions of galaxies observed by our telescopes in the large surveys are not distributed randomly in the Universe. They rather form a web-like structure, called cosmic web, consisting of large void regions of galaxies surrounded by walls separated by filaments intersecting in nodes where clusters of galaxies are located. While galaxies are used to identify the cosmic web structure, they account for only about 10% of ordinary matter, the baryons. An additional fraction is made of gaseous components but between half and third of the ordinary matter is undetected, hidden somewhere in the arcana of the Universe. This is the so called missing-baryon problem!

The ERC-funded ByoPiC team, led by Nabila Aghanim, a researcher at the Institut d’Astrophysique Spatiale (CNRS/Universite ́ Paris-Saclay), has unveiled for the first time the missing baryons in the cosmic web by stacking the X-ray signal from nearly 15,000 large-scale cosmic filaments using the 30 years-old ROSAT all-sky survey data.

A study published in Astronomy and Astrophysics on December 6, led by Kavli Institute for the Physics and Mathematics of the Universe Project Researcher Hideki Tanimura, and Aghanim, took advantage of the most recent X-ray survey SRG/eROSITA to confirm undoubtedly the detection of the X-ray signal associated with a thermal emission from a hot plasma in the cosmic filaments.

This signal arising from only 460 filaments, within the first 140 deg2 survey released by the SRG/eROSITA collaboration, allowed to precisely constrain the plasma density and temperature.

The origin of the thermal emission and its links to the fundamental question of how the hot gas in the cosmic web evolved across times should be answered using the full-sky SRG/eROSTA, released in coming years, and the future planned large X-ray observatories.

Research contact
Hideki Tanimura
Project Researcher
Kavli Institute for the Physics and Mathematics of the Universe (Kavli IPMU)
E-mail: hideki.tanimura _at_ ipmu.jp
* Please change _at_ to @