13 January, 2023
Kavli Institute for the Physics and Mathematics of the Universe (Kavli IPMU)

An international team of researchers including the Kavli Institute for the Physics and Mathematics of the Universe (Kavli IPMU) has studied the relation between galaxy size and luminosity of some of the earliest galaxies in the universe taken by the brand-new James Webb Space Telescope (JWST), less than a billion years after the Big Bang, reports a recent study in The Astrophysical Journal Letters.

The result is part of the Grim Lens-Amplified Survey form Space (GLASS) Early-Release Science Program, led by University of California, Los Angeles, Professor Tommaso Treu. It is aimed at studying the early universe when the first stars/galaxies ignited, which ionized the neutral gas in the universe at the time and allowed light to shine through. This is called the epoch of reionization.

However, details of reionization have remained unknown because telescopes until today have not been capable of observing galaxies in this period of the universe's history in detail. Finding out more about the epoch of reionization would help researchers understand how stars and galaxies have evolved to create today's universe as we see it. 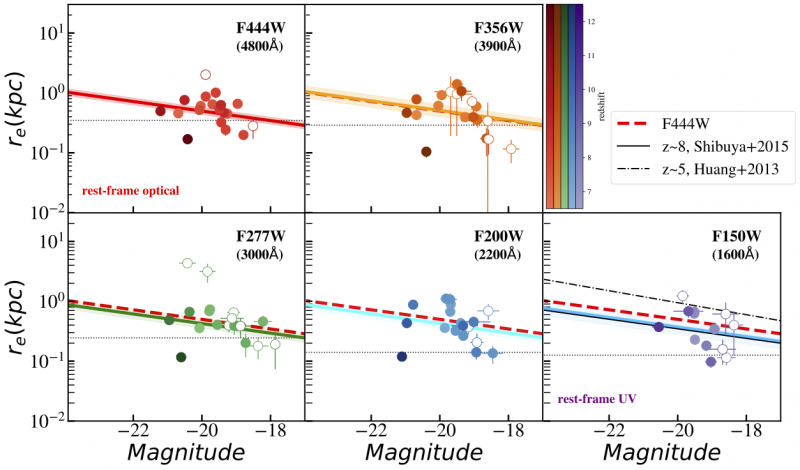 One study, led by Kavli IPMU JSPS Fellow Lilan Yang, and including Project Researcher Xuheng Ding, used multiband NIRCAM imaging data from the GLASS-JWST program to measure galaxy size and luminosity to figure out the morphology and the size-luminosity relation from rest-frame optical to UV.

"It’s the first time that we can study the galaxy’s properties in rest-frame optical at redshift larger than 7 with JWST, and the size-luminosity is important for determining the shape of luminosity function which indicates the primary sources responsible for the cosmic reionization, i.e., numerous faint galaxies or relatively less bright galaxies.

“The original wavelength of light will shift to longer wavelength when it travels from the early universe to us. Thus, the rest-frame wavelength is used to clarify their intrinsic wavelength, rather than observed wavelength.

Previously, with Hubble Space Telescope, we know the properties of galaxies only in rest-frame UV band. Now, with JWST, we can measure longer wavelength than UV,” said first author Yang.

The researchers found the first rest-frame optical size-luminosity relation of galaxies at redshift larger than 7, or roughly 800 million years after the Big Bang, allowing them to study the size as function of wavelength. They found the median size at the reference luminosity is roughly 450-600 parsecs and decreased slightly from rest-frame optical to UV. But was this expected?

“The answer is we don’t know what’s to expect. Previous simulation studies give a range of predictions,” said Yang.

The team also found the slope of the size–luminosity relationship was somewhat steeper in the shortest wavelength band when allowing the slope to vary.

“That would suggest higher surface brightness density at shorter wavelength, hence less observational incompleteness correction when estimating luminosity function, but the result is not conclusive. We don’t want to over-interpret here,” said Yang.

The team’s paper was published on October 18, 2022, by The Astrophysical Journal Letters.

Research contact
Lilan Yang
JSPS Fellow
Kavli Institute for the Physics and Mathematics of the Universe (Kavli IPMU)
The University of Tokyo
E: lilan.yang_at_g.ecc.u-tokyo.ac.jp
* Please change _at_ to @

Media contact
Motoko Kakubayashi
Press officer
Kavli Institute for the Physics and Mathematics of the Universe (Kavli IPMU)
The University of Tokyo
TEL: 04-7136-5980
E-mail：press_at_ipmu.jp
* Please change _at_ to @